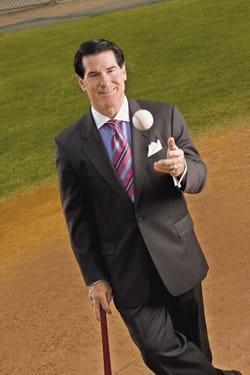 Steve Garvey amassed lofty numbers during his Major League Baseball career. This summer, the most important figure for Garvey is two.

That’s the number of college baseball players Garvey is hosting at his house in La Quinta. Both will play for the Palm Springs Power, a collegiate select team that plays at Palm Springs Stadium.

“This summer is going to be a lot of fun for everybody,” Garvey says on a sunny Friday afternoon at Palm Springs Stadium. “It’s going to be great having those guys around.”
Kent Walton and J.T. Musso, sophomores at Brigham Young University in Provo, Utah, are part of a Power team that has become an offensive juggernaut.

Power team owner and General Manager Andrew Starke expects a crowd of 4,000 at the June 1 season opener (last summer’s opener drew 3,500). He hopes to attract a capacity crowd of 6,000 for the July 4 game, which includes Independence Day fireworks.

The Power started last season with a 17-0 record and finished a remarkable 39-7. The team’s final victory was the franchise’s 100th in only three years. Starke expects the Power to vastly improve this season, with the addition of several accomplished players, including Walton and Musso.

“These two are going to be real studs for us,” he says of the two players who will be staying with the Garveys. “Steve has a guest hacienda right in his back yard, as well as a batting cage,” Starke says. “This is obviously a great opportunity for all his experience as a player to kind of rub off on the guys staying with him.”

Garvey says it also is a wonderful chance for his three children — all of whom love baseball or softball — to spend the summer with two college kids.

“Spring and summer means it’s baseball time for all of us,” Garvey says. “This is going to be a great time for my kids.”

Steve and his  wife Candace have three children: Ryan, 14; Olivia, 12; and Sean, 8. Steve coaches the Palm Desert Dodgers Little League team on which Ryan plays, and Candace is the team’s general manager. Steve Garvey and his 12-year-old daughter Olivia (pictured at right) have selected their seats for the two-month Palm Springs Power baseball season.

Steve Garvey was a 10-time All-Star and the 1974 National League MVP as a Los Angeles Dodgers first baseman. He also starred for the San Diego Padres. To honor him, the Padres retired the superstar’s No. 6 jersey in 1988.

The Garveys moved to La Quinta two summers ago.

“We’d been coming here for 25 years,” Steve Garvey says, “and I knew we’d wind up here eventually. We finally made it permanent.”

With the addition of the BYU players, Garvey will be sharing his decades of baseball knowledge with a “family” of seven this summer. Last summer, he enrolled his two boys in a two-day instructional clinic hosted by the Power. Today, Starke wishes Garvey had a second guest house.

“We are so grateful to Steve Garvey, and anyone else who is able to do what he has done for us,” Starke says. “If we don’t find host families, we can’t really have a team.”

Garvey’s generosity runs deep. He succeeded Frank Sinatra as national campaign chairman for the Multiple Sclerosis Society. He is a volunteer and spokesman for Special Olympics, ALS Foundation (Lou Gehrig’s Disease), Juvenile Diabetes, and Pediatric AIDS Foundation. And he also holds positions on civic committees and corporate boards, including Retenitis Pigmentosa Foundation, The Scripps Clinic and Research Foundation, and the Alzheimer’s Foundation.

“I’m also really proud of the work Candace and I are doing for Xavier College Prep in Palm Desert,” Garvey adds. “We’re helping them lay the academic and athletic foundation there.”

Garvey is as tireless off the field as he was on the field. Often overlooked is the fact that he once played in 1,207 consecutive games, surpassed only by Cal Ripken and Lou Gehrig.

Like most people, Andrew Starke wanted a career he could enjoy. He has crafted that, and much more, for himself: He founded the Palm Springs Power Baseball Club in late summer 2003 and continues to serve as its president and general manager.

“This is the best job I could ever have dreamed about,” Starke says. “This is paradise. Absolutely.”

Starke, 27, played at Mercer University in Macon, Ga. (where he was a four-year scholarship athlete) and earned a spot on a collegiate all-star team. After graduating with a degree in business administration, the personable Starke worked for the University of Central Florida’s athletic department in a business capacity.

The UCF position led him to Major League Baseball’s Tampa Bay Devil Rays and then to the marketing staff of the NBA’s Orlando Magic. (One of his Magic staff co-workers will be a groomsman at Starke’s wedding in Macon later this year.)

Before moving to Palm Springs four summers ago, Starke worked for a semipro baseball team in Long Beach. He debuted his Power team on June 4, 2004, in front of 3,300 fans.

Coming off a stunning 39-7 record, the Power appears poised to build on Starke’s successful entrepreneurship.