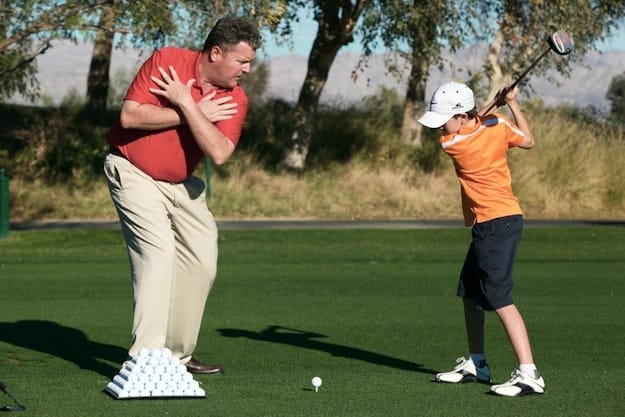 Watching your golf swing on video is akin to hearing your words projected via voice mail. Every subtlety is a bit different than one expects.

Mercifully, the desert is home to the expert empathy of Mike Ellis, senior instructor at Marriott Golf Academy on the grounds of Marriott's Shadow Ridge Golf Club in Palm Desert.

After nearly 13 years of operating as the "Nick Faldo Golf Institute," Marriott opted not to renew its licensing agreement with the six-time major winner. In what has been described an "amicable split" between the parties, both the Shadow Ridge instructional locale and their sister school at the Grand Vista Golf Club in Orlando recently rebranded with the new name, new promotional materials and a new logo that represents the three phases of the golf swing.

"We're the same teachers, we have the same programs – we're a different name," said Ellis, who has been at Shadow Ridge since the facility debuted as Faldo's first domestic course design in 2000. "We don't have to change much here. Which is good. We lose a big name, but Marriott is also a big name, so we're not too concerned."

Gone is the English undercurrent that accompanies the Faldo moniker. Intact remains one of the finest practice and instructional facilities the desert has to offer. For what "Sir Nick" may waft in dry British sensibility, the court of "Prince Mike" bestows in red-blooded, back-slapping American candor.

"We did have some Faldo-isms that we would kinda talk about," Ellis said of the transition. "Like, Nick was never an '18-inch circle around the hole' putter. I found that very interesting. From 20-30 feet away, I always think about that little comfort zone. And Faldo never liked it. I asked him why and he said, 'Why don't you just try to make it?' I love that positive approach, but percentage-wise, I don’t make many 30-footers."

Overall, the departure from Faldo won't present any marked change in instructional philosophy at Shadow Ridge.

Working with Shadow Ridge's full range, pitching and chipping range, lesson range, bevy of short game trimmings and on-site club fitting, Ellis makes ample use of the space and technology at his disposal.

"I think we stand out because of our facility and all the bells-and-whistles that come with it," Ellis said. "We have outstanding service here and very positive teachers that have a passion for the game. I've been teaching all over the country for the past 30 years – I've never had a facility like this that I could teach in."

A cache of golf schools are offered at Marriott Golf Academy, though a one-hour lesson well-serves those looking for an expedited observation.

"Grab your Driver and your 7-iron," Ellis instructed before taking a student out to the range to examine ball flight.

After hitting outdoors, a segue to the Academy's indoor studio ensues, where Ellis works with the V-1 swing analysis system to tape and narrate exacting observation of a prominent flaw.

With down-the-line and face-on views captured, Ellis freezes and frames a student in half-screen contrast with a professional approach (Ernie Els is among his favorites) to serve as evidence of intent.

A revisit to the outdoor range concludes the session, and, for the nascent student, it's a wonder how something you've lived with so intimately can be aptly altered in such a succinct time frame.

Upon returning home, an email from the Academy's "Alumni Clubhouse" awaits. Your taped session is ready for review, the ardent observation and exacting empathy of Ellis now part of your personal library.