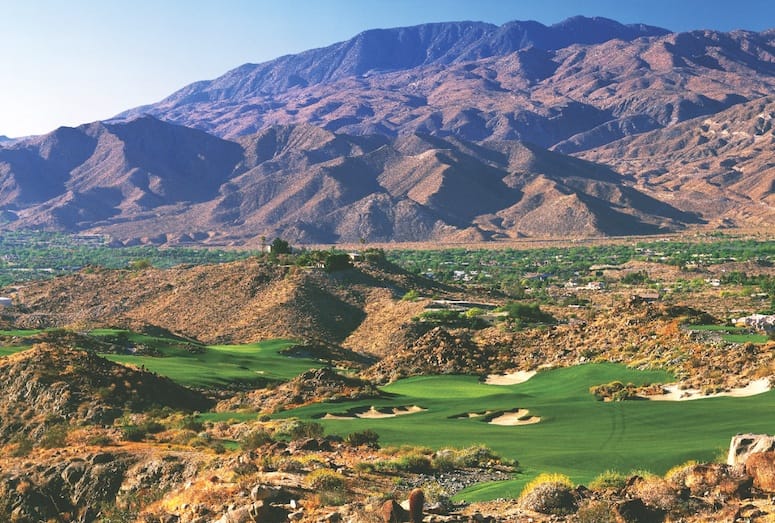 Like the notable ascent to its first tee, business at Stone Eagle Golf Club in Palm Desert — which is celebrating its 10th anniversary — is enjoying the fruits of a lofty climb. But in the wake of an economic downturn that left hundreds of private golf clubs in dire straits, it has been a tough journey.

Stone Eagle opened in 2005 with much aplomb as one of the most unique layouts in the Coachella Valley, if not all of Southern California. Envisioned as a second (or third) desert membership for an affluent client base with residences and amenities rooted at their “home clubs,” Stone Eagle boasted undisturbed desert grounds drawn by one of the country’s hottest golf architects: Tom Doak. In Golfweek’s listing of “100 Best Modern Courses,” Doak’s influence is abundant, with nine course designs to his credit. Doak’s website notes that the rocky, rising canvas that defines the Stone Eagle design was his most complex and difficult project to date.

After a strong opening, which saw the club fill nearly half of its planned cap of 450 members, the 2008 recession hit Stone Eagle with all the grace of a topped 5-iron. Just two years later, the bank took over the property.

Stone Eagle isn’t alone: According to the National Golf Foundation — the game’s domestic bellwether — golf participation across the United States has experienced a considerable decline since about 2006. Moreover, NGF research reports that in 1990 there were 4,810 private golf facilities in the United States. In 2010, the count declined to 4,262. By 2013, the number had shrunk to 4,011. In fact, NGF studies reveal that 2013 represents the eighth consecutive year that domestic golf course closures (public and private) outpaced course openings.

Stone Eagle, however, was shut down for just two days. “We had seven original members, now our current owners, who came together and out of pure love for the property and the course said, ‘There’s no way we’re going to let this go. It’s such a special place that we need to save it,’ ” says Rob Blackburn, the club’s general manager and director of golf.

For the course’s rebirth, the “Stone Eagle Seven” implemented a new membership model.

“When they purchased the club in 2010, the owners had to start from zero members in a very tough time when memberships weren’t selling,” Blackburn says. “So, the philosophy changed from having a 450-member club to a 225-individual-member club. At the 225 number, you’re now offering a far more exclusive experience that does not require any tee times.”

Yet exclusivity alone does not a solvent model make. The tenet of flexibility is what truly has Stone Eagle turning heads.
Forgoing traditional club membership models, which most often include initiation fees, monthly dues, and a waiting list to exit the club, the reformed Stone Eagle membership philosophy opts for simplicity.

By offering a renewable annual membership plan (currently at $18,000 per year), members are presented the opportunity to depart, penalty-free, after their year is up.

“Those dues are paid up front, so it’s a no-risk membership with a one-year commitment,” Blackburn explains. “And at the end of the year, if members aren’t satisfied with the experience — or something changes in their life and they can no longer justify that membership — they can walk. It’s as simple as it gets. It’s a program that makes sense for the times.”

Blackburn frequently attends functions in the valley where membership directors and golf brass from the desert’s top clubs convene to share information on what’s working across their respective spreadsheets. Blackburn modestly offers that he’s seen no other club currently working with a renewable annual membership plan.

“We’re all out there trying to find out what’s going on and understand the pulse of business in the valley,” he says, “because it helps all of us.” Course architect Tom Doak incorporates native landscape features into his designs to move as little earth as possible, such as the desert boulders and plants surrounding Stone Eagle’s first hole.

Member dues are the lifeblood of most private clubs, but in the fickle golf business, prospective members are becoming increasingly wary (and learned) about how much they’ll spend to join.

With nearly two decades in the golf business and as a veteran of four private clubs (including two others in the desert), Blackburn is well-versed in traditional membership structures, where, for the vast majority of clubs, getting out is tougher than getting in.

As Blackburn explains, in a typical model, which requires four new members to join before somebody on a waiting list may terminate their membership, members come in and pay an initiation fee, which may or may not be refundable. Usually it is, although it’s typically based on a 4-to-1 ratio that’s common for most clubs built in the last 20 years.

“Depending on the types of memberships selling — and if they’re selling — you could be on that list a long time,” Blackburn says. “And it’s not just the fact you might lose your initial investment, which is the largest out-of-pocket expense, but now you’re locked in for an extended period of time for the monthlies, which is a big thing.

“The other hook a lot of high-end clubs have is the dues side, where members are locked in to paying dues until they’re out of the club,” Blackburn notes. “So, if you’re on a list for 10 years, that’s a decade of dues to be paid; there’s no relief from that obligation.”

Since the Stone Eagle model works without the safeguard of monthlies and waiting list dues, retaining members is essential. As evidence of its return to fiscal stability, the club has enjoyed a minimum 92 percent retention rate each year since its reconfiguration.

“The first couple of years after reopening, the club was losing money and obviously the owners would have to re-infuse more money into the club to keep it going,” Blackburn adds. “But this last fiscal year was the first year we did not lose money. It’s solvent. The numbers are all working, and we’re fully anticipating that this year we’ll hit our member cap.”

Like a fine player employing every club in the bag to find on-course success, achieving and sustaining prosperity in today’s golf business requires the ability to swing with adaptability.

“One of the things we see in looking at Global Golf Advisors’ 2,400 member clubs around the world is that club members want reliability in regard to what it will cost to belong to the club,” DeLozier says. “So, the membership model that is being put forward at Stone Eagle is one that provides reliability and a high degree of certainty that people can expect. It’s a distinctive model, a good concept, and one that has attributes that are advantageous to top clubs.”

According to information derived in part from the NGF, DeLozier adds: “We’re seeing about one-third of the clubs in the U.S. that are doing well, by their own description, and those clubs that are doing well are doing very well. Another one-third or so of the clubs are not doing well, and by their own description are financially at risk. The remaining third of clubs are falling in between and teetering between becoming relatively successful financially or not.”

Across the country, golf insiders are seeing the need for membership malleability.

The Club Managers Association of America (which includes Stone Eagle as a member) provides professional development for managers of private clubs. Operating since 1927, the association works with nearly 2,600 facilities around the nation (750 of them in California), and counts 80 percent of its members as working in the golf and country club industry.

“Since the recession hit, you can pretty much find any model; people are trying everything,” says Kathi Driggs, COO of the association. “What Stone Eagle is doing is one of the more flexible ones, but there are a lot of facilities that are trying models that are going to make it more flexible for people to get in and try the club. The membership programs are all over the board right now; people have become amazingly creative with the type of models they’re offering.”

By all indications, the coming years will witness private clubs across the Coachella Valley (and around the country) requiring such flexibility and creativity. To survive, clubs will need to maintain membership numbers amid a golf culture that will soon see the necessity to replace aging members with the next generation of prospective private clubbers.

“Five, 10 years down the road, will this still be the right model?” Blackburn asks. “It may not be if things have changed with the economy again. But it makes a lot of sense right now, and that’s the direction we’re moving forward with because it’s been successful.”