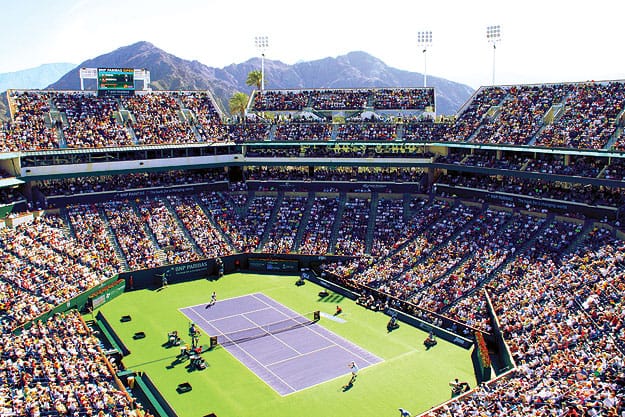 1 — Take in a big match on Main Stadium:
Indian Wells Tennis Garden offers great views from every seat location, with fans in the upper tiers sitting as close to the edge of their seats as those in courtside boxes. Celebrities Ben Stiller, Will Ferrell, Jenna Fischer, Kate Walsh, and Pau Gasol have been seen in and around the player’s boxes on the east side of the stadium.

2 — Get a player’s autograph:
The BNP Paribas Open is known for its amazing fan experience, especially when it comes to player accessibility. Tennis Warehouse hosts daily autograph sessions with players in the field, and Ace Authentic sells merchandise autographed by players across many different eras of the game.

4 — Double your pleasure:
BNP Paribas Open attracts not only the best doubles teams in the world, but also individual players who compete in doubles. Many doubles matches are played on the outer courts — another great way to watch superstar athletes up close and personal.

5 — Explore the grounds:
Concessions at Indian Wells Tennis Garden go way beyond hot dogs, hamburgers, and fries. Restaurants such as Breakpoint Bistro and Baja Mex offer a variety of choices for fans. Additionally,  large video walls keep you from missing any of the action while you refuel.

6 — Scope out the schedule of events:
BNP Paribas Open Kids’ Day kicks off March 2. Other events include a musical performance by the Bryan Brothers Band — consisting of No. 1-ranked doubles team Bob and Mike Bryan, March 7; And the Wheelchair Tennis Exhibition featuring some of the world’s best Paralympic athletes, is set for March 13.

For a full schedule, visit www.bnpparibasopen.com