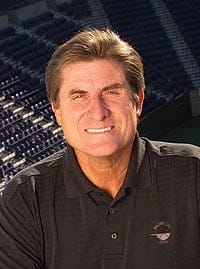 Smack in the middle of the desert, a magnificent tennis stadium — the second largest in the world — unfolds in monumental fashion, the improbable host of one of the world’s six largest tournaments: the Pacific Life Open.

In a spacious office beneath the arena, Charlie Pasarell sits in front of a poster showing a slender young player serving a ball. “Forest Hills, 1964, the site of the U.S. Nationals at the time, now known as the U.S. Open,” he says. “I was 20 then.”

During this precious moment of peace during last year’s Pacific Life Open, Pasarell, the tournament director, reflected on what he has accomplished here.

The Indian Wells Tennis Garden would have been planted in Las Vegas had Pasarell not asserted his vision. In November 1997, Pasarell and his colleagues, including Andre Agassi’s team, were negotiating to move the tournament to Nevada from former host Hyatt Grand Champions Resort in Indian Wells. But the Vegas investors wanted to wait until 2004 and Pasarell did not. In March 2000, he opened a $75 million, state-of-the-art tennis garden featuring a main stadium with 44 luxury suites and seating for more than 16,000 spectators, as well as press and broadcast skyboxes, luxurious locker rooms, fitness facilities, and VIP dining rooms.

Additionally, the 190-acre complex offers 20 world-class courts, two more stadiums with seating for 8,000 people, two Har-Tru courts, and eight acres of outdoor exposition space — all situated along Miles Avenue between Washington Street and Highway 111. Only Flushing Meadows in New York has a bigger stadium. Perfectly positioned, Pasarell has been the steady force behind Pacific Life Open, which he calls “one of the greatest tennis shows on the planet.”

Now Indian Wells commands the attention of elite tennis destinations such as Melbourne, Wimbledon, Paris, New York, and Miami — which keeps Pasarell as enthusiastic and energetic as he was in 1967, when he was the top-ranked U.S. player. He began playing at age 8 in his native San Juan, Puerto Rico, under coach Welby Van Horn. “My proudest achievements were five years representing the United States in Davis Cup,” he says.

“Charlie had a grand serve and was a classic volleyer,” tennis media bard Bud Collins recalls. “He’ll be remembered for two matches. He holds the world record for playing the [two] longest matches in professional competition — singles [five hours and 12 minutes in 1969] and doubles [six hours and 24 minutes in 1968].” The singles match was played over two days at Wimbledon.

“While the event was at La Quinta, we once had such a stormy wind that jeopardized the whole tournament,” recalls Dee Dee Felich, his assistant for 22 years. “I looked at Charlie and asked: ‘What do we do now?’ ‘Hold on,’ he answered. I am still holding on, decades later.”

A founding ATP member, Pasarell continues to serve in its high leadership positions. Closer to home, he’s chairman and CEO of PM Sports Management Corp. During the tournament, Pasarell arrives at the Tennis Garden around 8:30 a.m. “I walk around the grounds before spectators come in, to see how everything looks and to get the general feel for that particular tournament day.

“I have an incredible partner [President] Raymond Moore and a dream team staff, led by Dee Dee Felich and Steve Simon, who are on top of everything,” he says. “We have daily meetings but they know exactly what they’re doing, so I don’t have much to worry about. We have 50 employees and about 900 volunteers helping us during the tournament.”

Charlie Pasarell has a philosophy about “the show”: “I am first and foremost a tennis player who loves the sport, so I want to create the best possible stage for the players. That is my single motivation. I want the players to come and feel like they’re on the greatest stage in the world. And, at the same time, I want the audience to feel like they have come to see the great show. So, then you start thinking, ‘What does the audience want, and what can I do for the audience? And what can I do so that they’ll be saying, ‘Wow, what a show.’ You have to think about the press. You have to show them the greatest show on earth.”

Greatness and history prevail on the walls inside Indian Wells Tennis Garden, including Pasarell’s wall dedicated to his late friend Arthur Ashe. A statue of the legendary player dominates the entire space. “We met when I was 12 and he was 13,” Pasarell says. “We were also roommates at UCLA. He truly was a sports hero. There have been many great champions, there have been many great athletes, but a hero is somebody that goes beyond that — somebody that has really done something to help other people by putting his reputation at risk and gone beyond the call of duty to help others. And that man did that.”

Today’s generation of players adore Pasarell. He granted young unknown players Pete Sampras and Andre Agassi wild cards to play at his tournaments. More recently, in March 2001, Goran Ivanisevic, at the end of his career, accepted a wild card from Pasarell. Encouraged by it, he went on to finally win Wimbledon three months later.

Lindsay Davenport, who won singles and doubles titles in Indian Wells, declares, “Charlie’s the greatest. I even shoveled for him at the Tennis Garden ground breaking.”

During the tournament, Pasarell’s family — wife Shireen and two kids Fara and Charles — spend lots of time with him at the Garden. The game runs deep in his family: His father was and his brother-in-law remains a physician for the U.S. Davis Cup Team. And when he’s not orchestrating the Pacific Life Open, Pasarell often flees his La Quinta home. “I travel a lot and visit the other tournaments,” he says. “I’d say up to 40 percent of the time I’m on the road.”

After all, it’s the only way he can stay on top of his game.