Harry Oliver billed his Desert Rat Scrap Book as the “only newspaper in America you can open in the wind.”
PHOTOGRAPHY COURTESY PALM SPRINGS HISTORICAL SOCIETY

At first glance, desert residents in 1941 might have thought a movie studio had sent them the star of that year’s Western about a famous outlaw. Harry Griffith Oliver sported cowboy boots, a black Stetson, and a confident stride. He was a straight shooter, sure, but armed with wit, not a Colt .44 — more Will Rogers than Billy the Kid.

Born in Minnesota in 1888, Oliver moved with his family to the West Coast and took a job as a scenic painter for Seattle’s 1909 World’s Fair. He then turned his talents to Hollywood, where he worked as a set painter for United Artists, Fox, Paramount, MGM, and RKO. He garnered film credits that included classics such as Ben Hur and The Good Earth and Oscar nominations for art direction on Street Angel and Seventh Heaven.

Abandoning a world of glitter, Oliver built an adobe structure in Thousand Palms and dubbed the property Old Fort Oliver. It was here that he began publishing Desert Rat Scrap Book in 1946 — telling tales and expressing his views about the nature of man and other creatures, the nature of the desert, and anything else that caught his fancy. Like many Coachella Valley pioneers, he straddled the precarious line between advocating for development and safeguarding the desert’s natural beauty. But he gladly offered his own brand of solutions to any challenge. For example, when a clump of palms near the Cahuilla Indians’ bathhouse stood in the way of widening Palm Springs’ Indian Avenue, he proposed the city build the Indians a council house to which the palms could be moved. 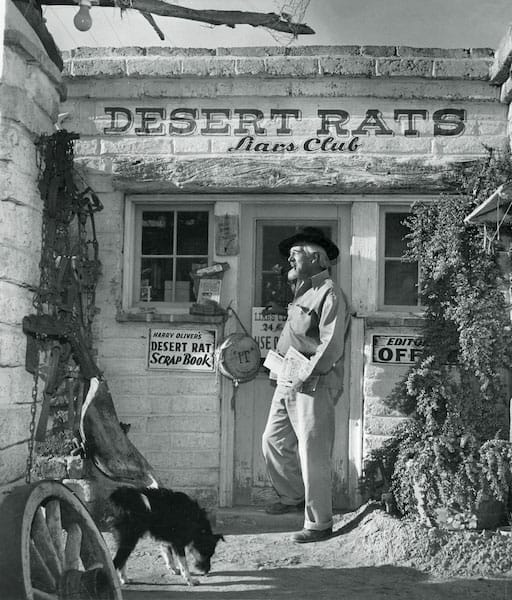 Newspapers and magazines described Oliver as an intrepid crusader, gallant defender, watchdog of the desert, mirage salesman, versatile showman, lampoonist, the alcaide of Thousand Palms, and the desert’s Don Quixote.

The last reference appears most prevalent, as Oliver consistently tilted at windmills. Noting the numerous battles he waged, Indio Daily News writer Paul Windhelm called him “a do-gooder, but with laughs” and further stated, “Like Don Quixote, he jabs us now and then with his fancies. He reaches into the air for these illuminative visions.”

Oliver himself said, “Sure I walk around 10 feet off the ground. But I throw a bigger shadow that way. … You’ve got to fight for what you believe in. Quixote fought with a lance. I fight with humor and showmanship.”

One can imagine that Oliver would throw down the gauntlet on today’s reliance on fossil fuels. But in 1947, when he railed against a Texas pipeline called “the Big Inch,” his objection fell squarely on contractors leaving “a 100-mile scar on the face of nature.” He asserted that they did not properly fill trenches “from Blythe to beyond Banning” and that loosened dirt would invite flooding. Gas officials responded by visiting Old Fort Oliver and promising to fill the trenches.

Two years later, Indio’s The Date Palm published an article titled “Sheep Threaten Desert Flower Carpet,” quoting Oliver as contending that sheep from north of Bakersfield (where grazing grounds were in poor condition) had been unloaded at Southern Pacific Railway’s station in Thousand Palms and were eating everything in sight. “Our lovely wildflowers are gone, and there’ll be plenty of dust for Indio and the rest of the valley soon,” he told the newspaper. Two days later, Riverside’s Enterprise began its article titled “Sheep Problem at Stalemate” by referring to “flower-eating sheep” and quoted Oliver (whom it referred to as “famed desert rat”) as saying, “Sheriff’s deputies are confused, citizens are wearing guns, county officials are racing around in cars with reporters and photographers, and the sheepherders are calm.” 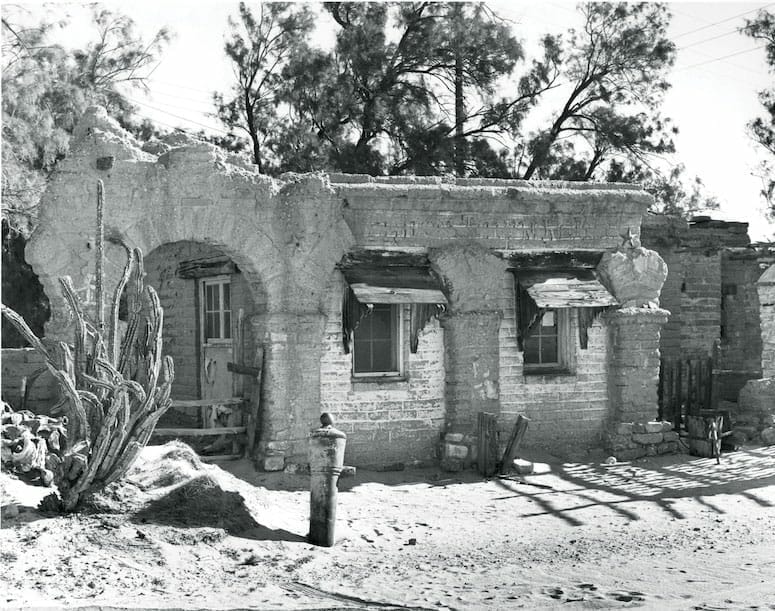 Harry Oliver claimed “Fort Oliver” was “as old as the hills” because he made its adobe from the clay of surrounding hillsides.

Like a dog with a sock in its jaws, Oliver wouldn’t let go of the issue, raising it again in 1953. He told The Desert Sun, “The wildflowers are hitting their peak now, and we are not going to stand for this sheep business.” The newspaper reported that Oliver would take up the issue with the county board of supervisors and previously had managed — “after a vigorous and heated campaign” — to have visiting sheep removed.

In 1951, Oliver targeted Indio’s annual Date Festival, for which he had designed the Arabian Nights Pageant stage (in 1947). He pointed out to festival organizers that the two-hump camels they featured each spring were inappropriate for the celebration. “What you people want are dromedaries — the one-hump variety,” he said. “They are native of Arabia. The two-humper comes from what was once Persia.” Oliver suggested the fair board contact Los Angeles Shriners, saying, “They have some dandy one-humpers. Photogenic, hygienic, well-trained, compatible, and handsome.” 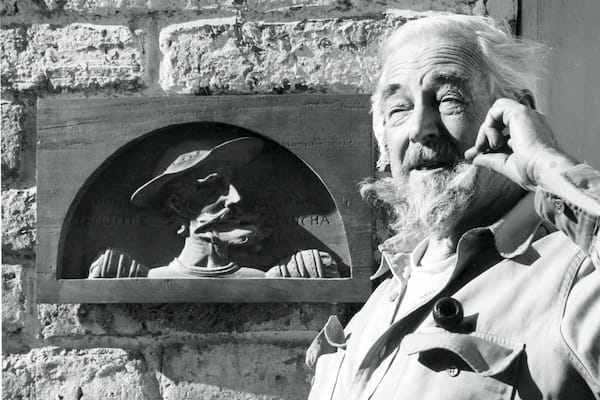 Harry Oliver homesteaded in Thousand Palms.
He waged his most protracted fights over roadways. He criticized the narrow, twisting section of U.S. Highway 99 where numerous accidents occurred. After a head-on collision between two ambulances on the highway fronting his property, he created a barricade with a trio of 1800s-era cannons — but with their muzzles down “so they point toward Russia,” he explained, making more than one point.

San Bernardino Sun’s historian/columnist Burr Belden sent Oliver a clipping of the article about his barricade with this note: “Evidently you got RESULTS, as state announced Monday that new 99 would be built from Whitewater to Thousand Palms following [railroad] alignment instead of present dipsy doodle one.” The paper’s July 17, 1957, edition mentioned Oliver’s decadelong campaign for the four-lane, divided highway and his lobbying for the 10-mile stretch to be named in honor of his ally in the cause, county supervisor Homer Varner, who died the prior year. The article went on to state that “Oliver wants his county to modernize and reopen the historic south entry into Joshua Tree National Monument.”

The second traffic issue he tackled singlehandedly: littering. In 1954, he planted 100 signs wherever he found roadside trash during a thousand-mile sojourn in his 1928 station wagon — going as far as Nevada: “SHAME. Look What YOU Did! (Beauty Was Here Until You Came!)” In his duels with litterbugs, he particularly drew attention to Kleenex and beer cans and cheekily suggested that the latter be made of seasoned soybean meal so that cows, horses, and coyotes might eat the discards. 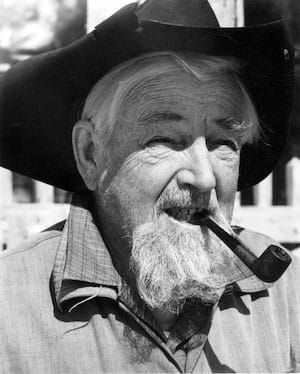 Harry Oliver himself said, “Sure I walk around 10 feet off the ground. But I throw a bigger shadow that way. … You’ve got to fight for what you believe in. Quixote fought with a lance. I fight with humor and showmanship.”

In 1958, he posted more signs aimed at guarding the desert’s beauty: “We are Wild West Wildflowers. Do not pick. Let it be said that we died with our roots on.”

Oliver was so adamant about the soil beneath Coachella Valley residents’ feet that, in 1946 and again in 1955, he tested the prospect of secession from a county named Riverside. He even designed campaign-style buttons reading “I Am a Secessionist” and “We Want Desert County.”

“‘Desert County’ will tell the world where we are, what we are, and what we have to sell,” he said. “Desert growers boast of their desert grapefruit. There are no other dates than desert dates. Nobody has a resort here that isn’t a desert resort. I believe the majority of residents will agree that for good promotion of this area we should throw out ‘Riverside’ and be just plain ‘Desert.’” 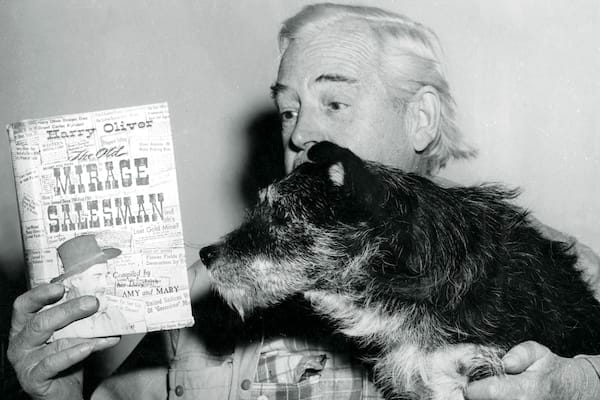 Harry Oliver reads to his dog, Whiskers, from the book his daughters wrote about their father, titled The Old Mirage Salesman.

In 1958, Oliver authored an editorial about plans for a cement plant near Palm Springs.

“[T]he foolish people let a cement mill move into the only place our wind comes from,” Oliver wrote, referencing 1949. “Dust covered the valley the first two dry years. Then in the fall of 1952, we got a lot of wind and rain. This started at tumbleweed time, and those tumbleweeds rolled around in the rain picking up cement and sand until they turned to boulders.”

Oliver died in 1973, long before the world amassed its current well of issues. But we can glean some wisdom in the guidance he offered in his Desert Rat Scrap Book: “When you are in doubt and perplexed, just do the task at hand with greater will and effort.”

Maybe, in fact, we need to don our Quixote armor.

Professor Greenfield Lawrel wrote this of “Oliverism” and “Quixotism”: “To a marked degree, [they] are expressions of faith in the power of the human — you and I — to create value by virtue of our faith in value — to generate a world above, the world of nature. … We cannot shrug them off as mere curiosities, as characters out of step with the rest of the world or as nuisances who disrupt the peace of our conceptions of right and wrong. There is something more to them, to their childlike stunts, their fondness for laughter, their love of idealism. Perhaps they bring a message to the great mass of us who dress, act, eat, think, and even dream alike. Can we afford to pause in our struggle to know what reality really is?” 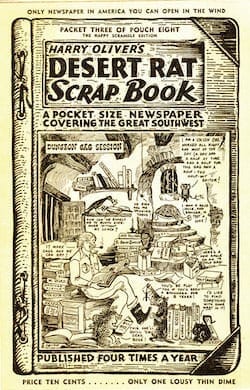 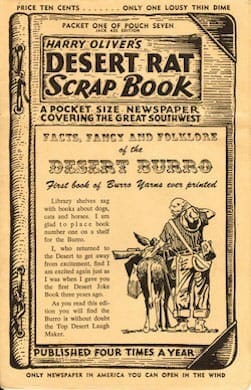 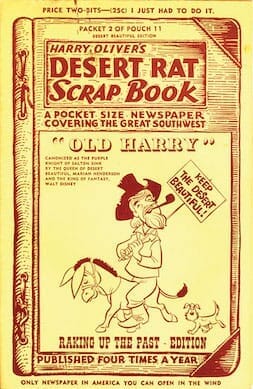 • Thou shalt love the desert, but not lose patience with those who say it’s bleak and ornery (even when the wind is blowing).

• Thou shalt speak of the desert with great reverence and lie about it with great showmanship.

• Thou shalt on the sabbath look to the mountain peaks so’s to know better your whereabouts, so’s you can help others to know the desert.

• READ NEXT: How The Desert Inspired Inventions, Creativity That Are Relevant Today.