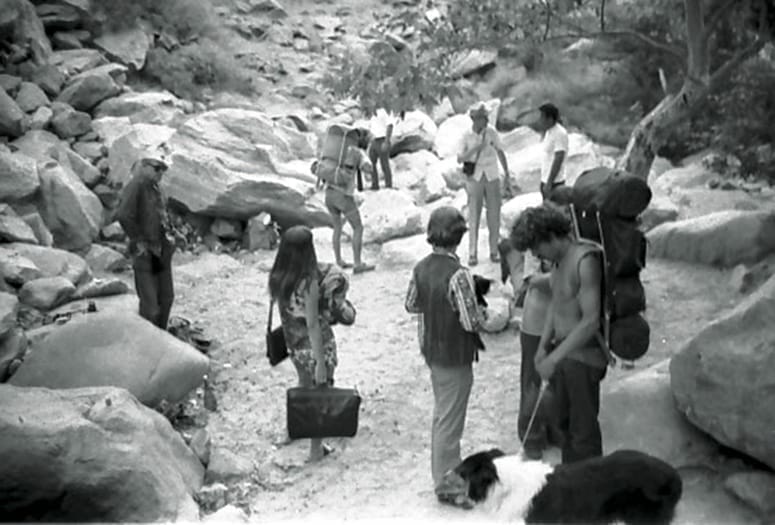 Concerned that hippies wanted to settle in Tahquitz Canyon, police raided and then closed the sacred ancestral home of the Agua Caliente Band of Cahuilla Indians until the tribe reopened it in 2001.
PHOTOGRAPH BY GEORGE AQUINO

Fifty-three years later, people have vague memories. Many were too stoned back then to remember now. Which is why there’s no consensus on how many young adventurers poured into Palm Springs during Easter week in 1969. The college students came for spring break. The hippies came on a pilgrimage to Tahquitz Canyon, the ancestral home of the Agua Caliente Band of Cahuilla Indians, whose thick patches of hallucinogenic Jimson weed elevated its reputation as the place to “turn on.”

Then there were those who came for the Palm Springs Pop Festival. Reliable estimates on the influx range from 5,000, reported by The Desert Sun, to 15,000, according to Palm Springs Police Department’s official postmortem. Talk to those who were at the Palm Springs Drive-In on April 1 for the first of the festival’s two rock concerts, and the number swells to 25,000.

They began gathering at 10 a.m. under the marquee that someone had changed from Pop Festival to Pot Festival; it urged attendees to “Come high and stay high” for the 6 p.m. concert. With tickets priced at $4 in advance and $4.50 at the door, come they did, in droves. By midafternoon, Ramon Road was backed up to Sunrise Way with traffic inching toward the drive-in, where cars were double-parked or left in the desert for a mile in every direction.

That afternoon, a hastily scheduled meeting of city, county, and state law enforcement officers determined that Palm Springs was woefully unprepared for the perfect storm that was about to make landfall. The crowds of Easter weekend vacationers, spring breakers, hippies, Hells Angels, and local kids were more than the city’s 55 sworn officers could handle. For the first time in Palm Springs history, they called in reinforcements from neighboring cities.

Downtown, bumper-to-bumper traffic tied up Palm Canyon Drive, where hundreds of young people lounged on sidewalks watching the parade of cruising vehicles. According to police reports, 1,000 to 2,000 “unkempt, sullen, dissipated, and resentful hardcore hippie types” had set up camp in Tahquitz Canyon. With no restrooms or camping facilities, they ventured into town to bathe in public fountains, dine-and-dash at local eateries, and shoplift their way through supermarkets. Police claimed they created “a more violent type of atmosphere” than the “usual friendly and healthy teenagers.” 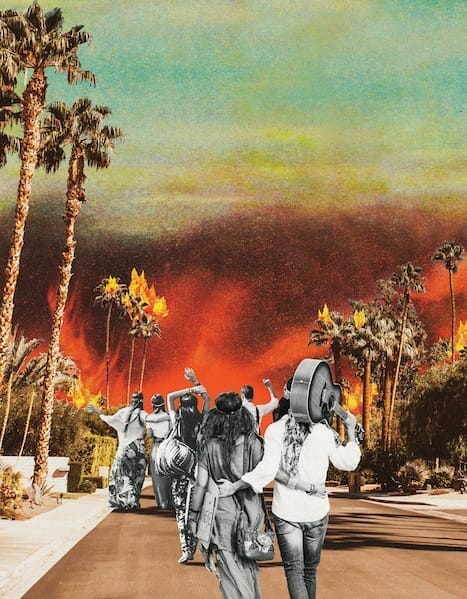 Those healthy teenagers had been sneaking into the drive-in for years, but a group of almost 1,000 out-of-towners, unfamiliar with its breachable south side, crashed the gates. Armed with sand-filled bottles, bricks, and two-by-fours, they tore down a 20-foot section of chain link fencing and charged the police, injuring five officers.

Onstage, Los Angeles disc jockey B. Mitchell Reed introduced Timothy Leary, the Harvard psychologist and LSD guru whose phrase, “Turn on, tune in, and drop out,” became the mantra of a generation. It was well after 6 p.m. when John Mayall, The Paul Butterfield Blues Band, Lee Michaels, and others performed.

By the time the show ended, 67 additional officers were on the scene. Nevertheless, approximately 1,000 concertgoers refused to leave. Setting up camp for the night, they tore down a snack bar for firewood and, according to police, exhibited “all types of uninhibited behavior.” It was the ’60s after all.

Meanwhile, downtown, two cops stopped a stolen car with four young occupants in it. When the 16-year-old-driver refused to comply with orders, Officer Ken Elkins reached in to turn off the ignition. The teen accelerated, lost control, and crashed into a building, dragging Elkins, who suffered a broken back.

In the morning, the city realized it had a big problem: Another concert was scheduled for that evening at Angels Stadium. Officials considered cancelling it, but because of robust advance ticket sales, they decided it was better to try to contain the crowd than cancel the show and risk retaliation. 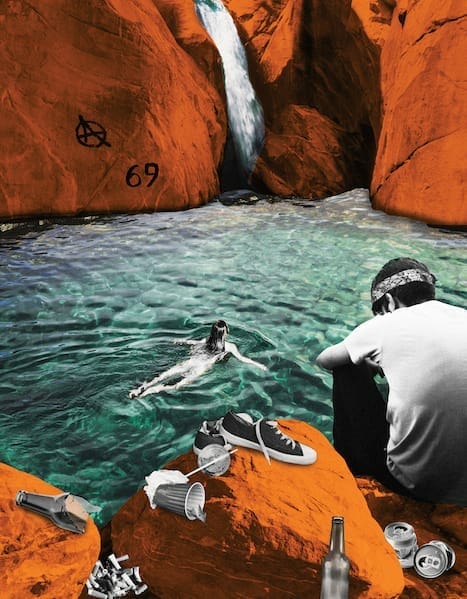 During the day, a police helicopter flew over Tahquitz Canyon advising campers to disperse or risk arrest. Among the 1,500 people drinking wine and smoking pot at the canyon’s seven waterfalls (including the one used as the setting for the movie Lost Horizon) were local boys who fondly recall seeing their first naked woman swimming in one of the sacred pools, accessible only by hiking trails.

That night, under the glare of stadium lights, 110 police officers disregarded the drinking, drugging, and sexual activity. They had other concerns, and neither the headliners — Ike and Tina Turner, Buddy Miles Express, and Canned Heat — nor the 3,500 audience members seemed to notice when a large number of cops began slipping out to deal with a situation developing outside.

There, a chanting mob of 3,000 ticketless youth were joining forces. Pushing forward, they bottlenecked the entrances. One large group charged the fence. The police responded by discharging pepper spray, driving them back to the front of the arena where they attempted to take over the ticket booth. Pushed further toward Sunrise Way, the crowd formed a battle line, throwing rocks and breaking car windows. A large number of them crossed over to a Shell station on the corner of Sunrise and Ramon, breaking its plate glass windows. With his frightened family inside, the proprietor, Harlan “Moose” Moore, armed with a rifle, warned the advancing crowd to stop. One 17-year-old boy charged Moore and was shot. Another bullet ricocheted, striking a 20-year-old woman in the chest.

The enraged crowd moved into the desert south of Ramon Road and continued to hurl bottles and rocks at passing cars and pedestrians. They were met with tear gas and pepper spray, deployed as a Los Angeles Police Department helicopter flooded the area with light. The defiant mob threw many of the grenades back at the police but then began to wane. At that point, the concert organizers, who kept the show going well past its planned closing time, released the crowd. 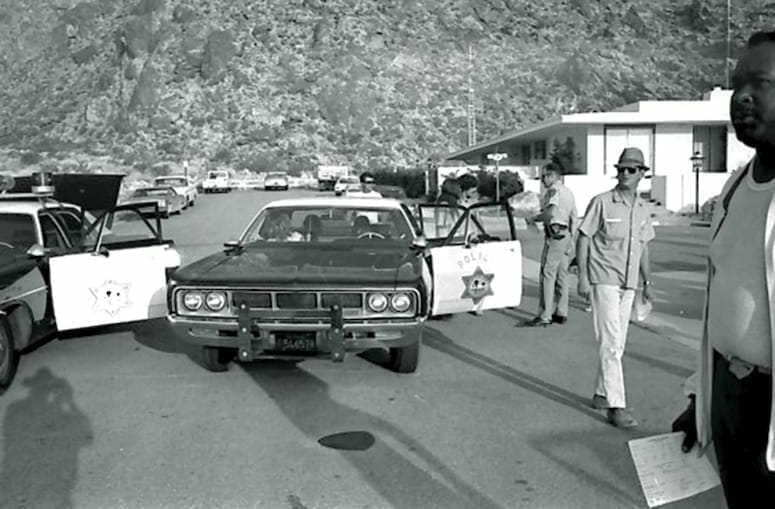 The shooting victims were taken to Desert Hospital (now Desert Regional Medical Center), which saw more than its typical share of activity that week, including a police officer whose eye had been gouged out and a young girl who had the remains of a broken beer bottle removed from her vagina after a “love-in.”

The following day, police determined that the illegal takeover of Tahquitz Canyon was the root of the city’s problems. Harkening back a few years to when a 17-year-old girl was found living in one its caves, they were convinced that a large number of hippies intended to make the canyon their permanent home.

About 100 officers assembled in the canyon as a Riverside County Sheriff’s helicopter circled overhead announcing that the party was over. They used tear gas in a last-ditch effort to clear out the caves. Some stragglers threw rocks at police from canyon ledges. Those who could walk or be carried out were allowed to leave. Facing little resistance, the eviction resulted in only 13 arrests. Despite the efforts of a few to regain entry, the liberation of the canyon was completed by sundown.

Describing the hippies’ exodus, a report in The Orlando Sentinel was reminiscent of lyrics from the Broadway musical Hair, depicting them as “beaded, bearded, bare, and berserk,” claiming “they bestrewed the streets with filth … and brazenly peddled pot and LSD.”

In the aftermath, Boy Scout troops, police cadets, and volunteers cleaned up Tahquitz Canyon, and the city put policy changes into effect. Outdoor concerts were banned for more than a decade, and Tahquitz Canyon was closed to visitors until 2001.

Compared to the 250,000 who gather for Coachella, the 1969 Pop Festival crowd seems miniscule. People have a hard time remembering how things got out of hand. Blame it on faulty memories or the drugs. Either way, it all seems like a distant dream, or law enforcement’s worst nightmare.