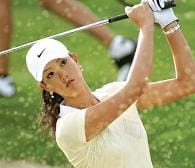 The next time golf sensation Michelle Wie sends the ball orbiting deep down the fairway or kneels for a close-up scrutiny of a putting green’s terrain at Bighorn Golf Club’s Canyons Course in Palm Desert, she can do so in the absence of a crowd. Perhaps she will take her first swing off the first tee in the stillness of an early morning — greeted only by the sun rising above the Santa Rosa Mountains.

The course where this 16-year-old made her pro debut last October during the Samsung World Championship feels like home — now more than ever. That’s because her family bought a second home at Bighorn for an undisclosed sum. They intend to keep their Honolulu home as their main residence and aspire to eventually add a third home in Florida to use as a base for golf events on the East Coast and in Europe as Michelle’s young-but-stellar golf career takes flight. All of this is possible because Wie turned pro and could finally accept prize money and sponsorship dollars. Nike swooped in and signed her to a sweet-16 contract estimated at more than $10 million. Michelle pocketed her first LPGA paycheck totaling $73,227 in late February by finishing third at the Fields Open at Kapolei, Hawaii.

"We fell in love with Bighorn during her first visit two years ago at the Samsung 2004,” says B.J. Wie, Michelle’s father, during a telephone conversation as he drove her to Punahou High School in Honolulu, where she is a junior. “Palm Desert has the best weather October to April, and we love the great restaurants and shopping that are just a five-minute drive down the street from Bighorn.” A protective father, B.J. Wie knows that the gallery of fans continues to grow with each appearance by his daughter, who has competed in PGA and LPGA events. He spoke of the need to provide crowd-free places for her to hone her golf game.

“We are impressed by how tight security is at Bighorn,” says B.J. Wie, a professor at the University of Hawaii. “At Bighorn, members respect the privacy of other members. That is why this is such a great place for Michelle to be able to practice in a quiet atmosphere and truly concentrate on the physical and mental aspects of her game.”

Trying to get inside Bighorn is tough — just ask Donald Trump. Three times, this billionaire and star of "The Apprentice" attempted to enter through the security gates to play the Canyons or Mountains courses. Three times, he was turned away.

“A former FBI director runs our department of privacy,” says Theresa Maggio, director of marketing at Bighorn. “Donald Trump happily shared his story on National Public Radio and said how even he couldn’t get in because you must own property here or be invited by a member to play here. That’s our policy. We have lots of fantastically successful people who live here — celebrities and self-starting entrepreneurs who want to come here, escape the public spotlight, and enjoy the privacy we offer.”

[…] This article continues in the May 2006 issue, or subscribe to avoid missing future issues!