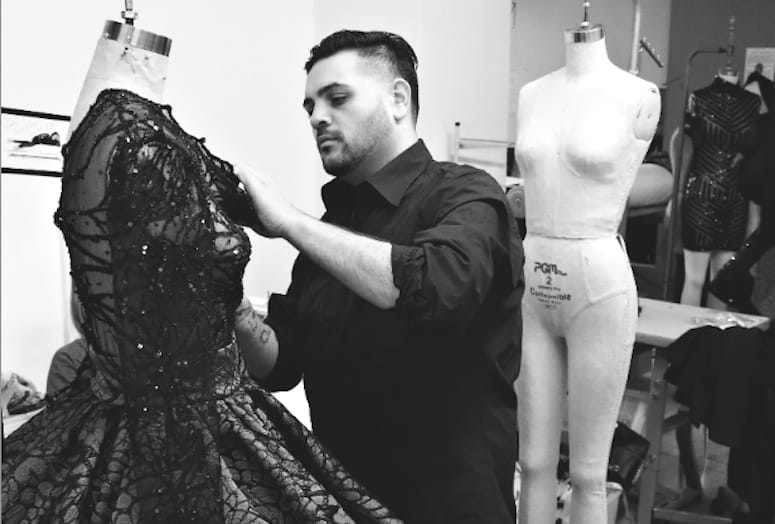 Michael Costello attends to a detail on a gown in his studio in Los Angeles.
Photographs by Fredrik Brodén

In high school, the boy crowned prom king often is the most popular, most athletic, and best-looking. But Michael Costello’s version put a different spin on the typical sock hop drama, and today his backstory comes as no surprise to anyone who follows fashion.

Costello’s saga began at a building his family owned at 286 North Palm Canyon Drive in Palm Springs. Although he was born in Los Angeles and raised in the San Fernando Valley, Costello’s family owned property in Palm Springs and spent a lot of time here. “My dad never had a ‘job job,’ ” explains the Project Runway alumn. “Whatever he could make a quick buck on, he would get into.”

Some kids have tennis moms. Costello had a fashion dad. In 1998, George Costello saw an opportunity to monetize the property that sat enviably right across from the Hyatt. The rent was only $500 a month, so he took 15-year-old Michael to see it. “He looked at me for a good five minutes,” recalls the son, “and then said, ‘You know what we’re going to do? We’re going to open your  %&%# dress store up there. That’s what we’re going to do.’ ” Michael Costello is not at all surprised his gowns and star turn on Project Runway made him a fashion sensation.
Photography by Fredrik Brodén

“Huh?” the designer remembers saying to his dad. “I’m still in school.” But he had been sketching his whole life, his parents knew how passionate he was about fashion, and they saw entrepreneurial potential. His father suggested Michael leave school, go to work, and get his GED.

So he did. “I loved school and had so many friends,” says Costello, “but I was ready to say goodbye to it. I knew it wasn’t going to help me with what I wanted to do next.”

Costello had long admired the work of Bob Mackie and William Travilla, and hoped to bring the glamour and glitz they were known for back to Palm Springs, which he believed had gone down-market. Mackie (the “sultan of sequins”), had dressed Carol Burnett, Cher, and Barbie; Travilla was an Oscar-winning costume designer and Marilyn Monroe’s go-to guy.

A few potential customers dropped by, primarily prostitutes and escorts. “Palm Springs had a lot of them and I was the only person making the revealing dresses to service their needs,” he recalls, laughing. The down-market critic was writing that script.

Then he went to the prom, and things began to change. He put on fashion shows at Palm Springs and Cathedral City high schools in advance of the big dance. “I offered a special: $250 for a prom dress. Actually, it was $268 and 12 cents, with tax. I’ll never forget that,” he says. The fee included hair and makeup services, which he provided in his boutique. “I was kind of like the prom king … of dresses,” he says. “I was doing something no one else in Palm Springs was doing, and I was making a lot of money off of it because I had at least 30 or 40 girls from each school coming to me.” He began to attract the clientele he’d been hoping for, some of whom had discovered his eye-catching windows, which he changed every Thursday night. “People would come just to see the windows; they hadn’t seen anything like it for years in Palm Springs,” he explains.

One day, a woman walked in and, after looking around, sat down and began playing the piano that was part of his décor. “That’s Toni Braxton,” Michael’s sister whispered to him. Braxton became a regular client, followed by Brooke Shields, Mary Bono, Suzanne Somers, and Faye Dunaway. According to the Los Angeles Times, Dunaway once told Costello, “I’m sick of all these $15 stores around here. It’s so wonderful you’re giving fashion back to Palm Springs.”

He was a working kid whose kid friends used fake IDs to recreate at the Spa Resort Casino and CostasNightclub. But for Costello, “ [M]y high came from being able to stay in my own workplace, make dresses, put them on mannequins, and do photos shoots with models,” he recalls. But one distraction was a boy named Jack whom he describes as “a super slim, gorgeous ballerina gay boy” who worked down the street at Baskin-Robbins. (“If those walls could talk … Their A grading would go down to a D.”)

One night, he invited Jack to his studio to watch American Pie. His mother figured it out and hatched a plan to arrange a marriage with a girl in L.A. he scarcely knew.

For some reason, her parents were amenable, and he went along with it. “I was only 18 or 19 at the time, and I just wanted to make my parents happy,” he explains. They had two children, but the relationship was doomed. “I think she always knew that I wanted something else,” he says. “She didn’t want me going to work because she thought I was going to cheat on her with the models. I kept thinking, ‘If you only knew.’ ”

They separated in 2005, and not long after, Michael met a man at Toucan’s Tiki Lounge. They became partners, for 10 years. “He was the first guy who ever treated me to lunch or opened doors for me,” says Costello. “There was a kindness about him that I liked a lot.” They sneaked around for two years trying not to get caught by Costello’s wife or parents before his partner eventually outed Costello, and they moved in together.

It took seven years to repair his relationship with his parents. Costello closed the store and took two jobs to pay the bills, one at CVS Pharmacy and the other at Tahquitz Creek Golf Resort. He saved his money and gave retail another chance a year later, abandoning the old space for a new one on East Tahquitz Canyon and focusing on ready-to-wear. Business was better, but money was still tight.

He auditioned for season eight of Project Runway in 2010, and was selected. “I remember saying, ‘I’m going to do something great with my life.’ ” He finished fourth and was asked to tape Project Runway All Stars in 2011, where he placed third.

Although the series gave him national exposure, his business really took off thanks to Instagram . “I started posting pictures of my dresses, which no one else was doing at the time,” he explains. “They were just posting fun things. No one was trying to make a business out of  it.” It was simple, he says. “You get a dress, put it on a model, post it, and put an email address or phone number so that the person who sees it can buy it.”

What really got people’s attention was a black lace number he designed in 2012 for model Jessica Burciaga. Burciaga, who could be J. Lo’s double, has 1.5 million followers on Instagram. She posted a photo of herself in the dress, and then J. Lo, who has 33 million followers, acknowledged the similarity. “Jessica got a lot of publicity out of that and I got tons of publicity, too,” says Costello of the $695 dress. “That was our No. 1 selling dress and I can’t even get the lace [anymore].”

Costello was making a lot of money, sometimes $20,000 a week. He got emails at all hours of the day, from across the U.S., and as far away as Saudi Arabia. He could hardly keep up with them, so he and his partner worked in shifts to reply to the emails that came in the middle of the night.

It broke his heart to leave his parents, but Costello felt he had no choice. “I remember saying, ‘I need to move to Los Angeles and hit it as hard as I can,’ ” he recalls. “I want the cover of the Los Angeles Times. I want to dress an A-list celebrity. And once I get that, I’m gonna go and do it in New York, too.”

Costello has waltzed his way onto the biggest dance floors, dressing A-listers and expanding his creative horizons into costume design.

He rented a tiny space in the L.A. Apparel Mart in the fashion district downtown, found a manufacturer, developed relationships with stylists, and watched the orders pour in. Celebrities started reaching out to him.

The A-lister he’d been waiting for  surfaced in January 2014. That’s when Costello met Ty Hunter, Beyoncé’s personal stylist, at a Golden Globes after-party. Hunter expressed interest in seeing Costello’s designs. He called a few days later and said he was in the area and wanted to stop by … in two hours. “We painted the walls, moved furniture around, and bought pastries; we did whatever we could to impress him,” says Costello. He even showed Hunter the secret stash of dresses he kept upstairs, out of sight. Hunter was noncommittal, but Costello and his team of seamstresses made 11 dresses for Beyoncé to consider wearing to the Grammys later that month .

In her first appearance on Grammy night, Queen B wore a black beaded La Perla jumpsuit. Costello was devastated. He and his partner went to Macy’s for some retail therapy. Monitoring Instagram on his phone, his partner noticed Hunter’s post of a close-up photo of the white lace from one of Costello’s dresses. Fifteen seconds later, Beyoncé walked onstage wearing the sheer handmade gown with white lace and nude-illusion fabric. Twenty-four hours later, Costello had 250,000 more followers on Instagram and had booked appearances on eight or nine entertainment news shows.

“It was a dream come true,” he says. “And that just started it. After Beyoncé, we got Britney Spears, Kim Kardashian, Khloe Kardashian, Nicki Minaj, and the list goes on.”

It wasn’t long before he was dressing the real Jennifer Lopez: She and Nicki Minaj, Meghan Trainor, and Kelsea Ballerini wore Michael Costello designs to the American Music Awards in November. It appeared L.A.’s elite could not imagine appearing in public without a Costello gown.

A New Member of the Costume Party

Costello has talked about giving retail yet another go, and developing a ready-to-wear line, but for now, he’s pursuing an interest in costume design. He created 16 original pieces for the most recent season of American Horror Story: Hotel, dressing castmates such as Lady Gaga. He appreciates the permanence of that platform. “I … think about how the show is going to go to DVD,” he says. “Television is there forever, and shows become iconic and memorable. I’m a part of that now and I love that.”

Costello has waltzed his way onto the biggest dance floors, dressing A-listers and expanding his creative horizons into costume design. But he remains in touch with his inner kid, and that guy’s idols. Bob Mackie, whom he met as a teen, says, “Michael has always known how to design beautiful and glamorous clothes. He understands how to enhance a woman and make her feel feminine.”

Next month, Costello will help produce the Stars of Project Runway night at Fashion Week El Paseo, where he will also stage his own show, Michael Costello Couture Presents. Although he no longer calls Palm Springs home, it’s where he got his start, where he still owns property, and where he harbors fond memories. “I lived a good life in Palm Springs,” he says.