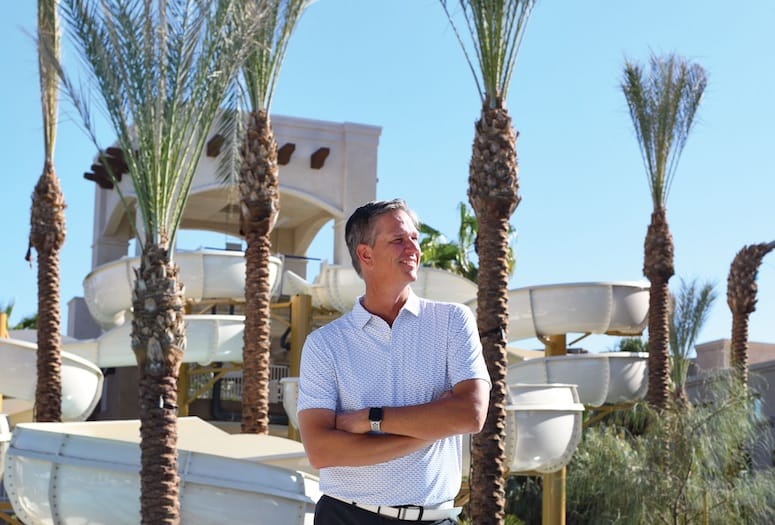 You were a valet back when the resort hosted the Indian Wells Masters (now BNP Paribas Open) tennis tournament?

Yeah. Wild, isn’t it? I grew up in the valley and went to college in San Diego and got a degree in business. After I graduated, just like many students who don’t know what they want to do, I moved back home. I was working for my family’s landscaping company. I didn’t really have a passion for it. I ran into an old friend at the gym one day who told me he made good tips parking cars at the Hyatt. I interviewed and got the job the next day. 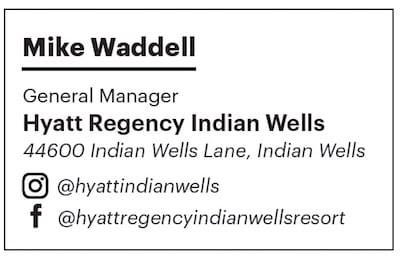 What were the circumstances for you to return as the top dog 22 years later?

It was really by chance. I’d gone down the sales path, working my way through multiple positions, including in the corporate office. I lived in London for four-and-a-half years overseeing sales. My wife was ready to leave. There was a hotel in Scottsdale that needed a general manager, which I’d never been before. I was there for two years, then I got a call: “What do you think about Indian Wells?” I said, “I grew up there! That was my first job.”

Why did you want  to come back?

When I think about all the places I’ve lived —  San Diego; San Francisco; Los Angeles; London;  Scottsdale; Washington, D.C. — I look at them fondly but feel blessed to have the opportunity to return. I’m not just saying that because I’m from here, but what we have to offer in the Coachella Valley is better than so many places.

How has the hotel changed over  the years?

When I was here, it was only 330 rooms with a 10,000-seat tennis stadium, which was torn down and developed into additional rooms and villas. We have 530 rooms and villas now, so it’s much larger. We added a ballroom across the street, and this year, of course, we opened an $8 million waterpark for guests that has been incredibly popular.

How many times have you gone down the new waterslides?

I haven’t gone down  the slides.

Why not?! Are you scared?

No, I’m not scared of anything! When I was a kid, I had season passes to  Magic Mountain, Knott’s Berry Farm, all those places. I think it’s because my son is too small to go down them right now, so when I do go to the pool, we’re at the splash pad with the little kids. I will go down them though. I promise.

Make sure you do something outdoors where you can appreciate the spectacular views of this valley. I forgot how beautiful it was here until I came back. I’m a big golfer, so my favorite view is from the fifth and sixth holes at the Players Course at our Indian Wells Golf Resort. Unbelievable.

• READ NEXT: Get to Know the Brew Master at Sixth Street Coffee in Coachella.