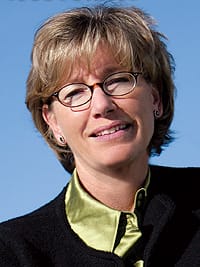 When Boris Becker was ready for his first driver’s license, Dee Dee Felich took him to the Department of Motor Vehicles. “That was probably more exciting to him than playing the [Pacific Life Open] tennis tournament,” says Felich, assistant tournament director and senior vice president of PM Sports Management Corp.

It is but one personal encounter she has had with some of the sport’s high-profile personalities. Ivan Lendl joined her 25th birthday celebration, and she joined Jim Courier’s Pacific Life Open win celebration in 1991.

An athlete herself, Felich grew up near Boston, Mass., competing with four brothers in a sailing program. “Instead of being picked on all the time, I picked up a racquet and taught myself to play tennis hitting the ball against the backboard,” she says.

Now tennis plays a major role in her life. In addition to her career, there are tennis connections at home. Husband Greg owns and operates tennis clubs in Lake Tahoe, son Donald competes on the Palm Desert High School tennis team, and son Jack wants to be a tennis pro like his father.

“We started [Donald and Jack] out in tennis when they were younger, but they didn’t want to play,” Felich says. “We are busy now driving to USTA events.”

Felich was 24 when she became one of PM Sports Management’s first employees in 1981. Since then, she has helped PM owner Charlie Pasarell realize his dream of bringing a world-class tennis tournament to the desert. The Pacific Life Open (March 6-19) has become the world’s fifth largest tennis event in attendance (the top four include more sessions) and the Indian Wells Tennis Garden, with 16,100 seats, is the world’s second largest tennis stadium.

There’s one goal yet to be realized.

“You see this historic old wooden racquet? People come in all the time and say, ‘Have this,’” Felich says. “I’m sure some day we will have a tennis museum. That was one of the ideas when we first moved here.”