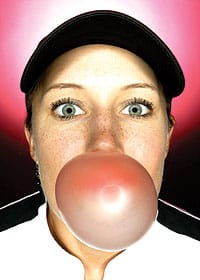 When 16-year-old Beatrix Hoyt dominated a field of seasoned players to claim the first of her three consecutive U.S. Women’s Amateur Golf Championships, we all should have seen it coming: Impetuous teenage girls the world over would soon pick up golf clubs to the wonderment of the stuffy old guard who still view the sport as the sole privy of gentlemen. Why, it was likely conjectured, a female golfer may well want to beat an all-male field at a high stakes Skins game!

Never mind that Hoyt’s accomplishments occurred between 1896 and 1898 and that in the intervening years women’s golf saw more than its share of roughs along the way to becoming perhaps the top female professional sport — because the spirit of the young woman who produced shock and awe at the turn of the previous century is alive and well in the latest crop of youthful LPGA professionals, especially those primed to play in this month’s Kraft Nabisco Championship.

It appears the public has noticed.

“We’ve seen a real change in the audience,” Tamra Borson says. Borson, the marketing and advertising coordinator for the Kraft Nabisco, has been with the tournament for nearly a decade and has seen firsthand the rise of coverage and excitement brought by the new wave of golfers. “Last year, especially because of players like [13-year-old amateur] Michelle Wie, it became much more of a family event.” Wie’s brand of golf — big, powerful drives that belie the fact that she’s legally prohibited from driving — is naturally crowd-pleasing, but it was her age that was most spectacular last year. “People are bringing their kids to watch these players, and it’s having a real impact,” Borson says.

Though Wie remains an amateur, a strong contingent of pros whose youth and skill have garnered notoriety — and lucrative endorsements — have a legitimate shot to win the first major of the 2004 season. Annika Sorenstam might be the best female golfer in the world — and her recent results suggest she’s one of the finest golfers, period — but the future of the sport may end up looking a lot like 21-year-old Natalie Gulbis.

Already beginning her third full year on the Tour, Gulbis’ game has grown proportionally to her media-ready persona: With model good looks, it would be easy to dismiss her recent inclusion on the covers of magazines and within the digital world of the latest Tiger Woods video game as mere window dressing — until you realize that she earned more than $250,000 in prize money in both 2003 and 2002 and that her resume includes 15 top-20 finishes.

Raised on golf by her father, John — a retired probation officer who used to take his daughter with him to the links near their Sacramento home during his time off — Gulbis might not yet be a household name like Sorenstam  (or Nancy Lopez before her), but she knows how to get there.

“What sells sports — and really what sells entertainment — is not just a person’s appearance or a person’s personality or even how they play,” Gulbis says. “It’s a combination of all of them. You look at a player like Lopez. She had the charisma, the spunk. She had the appearance, and she definitely had the game. I have to be the total package.

”And while this may seem like heady talk for a player only a few years removed from watching her playing partners on TV, Gulbis represents a generation of professional athletes who have found immediate success by leap-frogging their college, and, increasingly, high school contemporaries. While the sports world buzzed this winter about the impact 18-year-old Lebron James was having at the heights of the NBA and 14-year-old Freddy Adu gaining international acclaim (and endorsements) as the U.S. national soccer team’s rising star, educators and talking heads alike hypothesized about the life lessons lost by this sudden entrance into the adult world of taxes, house payments, and estate planning. For Gulbis, who spent a year at the University of Arizona earning All-American honors both on the field and in the classroom, all this talk only motivates her.

“The year I spent at the University of Arizona provided me with a great stepping stone to get to the LPGA Tour,” Gulbis says. “I don’t know if more is expected from me [because of her early jump to the pro ranks], but I’m certainly under more of a microscope. But then I look at like at how Beth Daniel won last year at 46, and in my mind that’s just as big a story. I hope to have that same kind of longevity.”

Longevity within the cult of personality is always a risky proposition. One needs only to think of the many athletes who’ve met with early acclaim for their fast starts but who ended up flaming out beneath the pressure. But Gulbis appears to have more than just smart marketing behind her.

“Natalie may have been popular initially because she’s fun to watch,” Borson says, “but she’s proven that she has the ability to be a winner.”

However, wins have eluded Gulbis thus far as a pro. In an era where every move an athlete makes is rehashed on TV and through the scrolling pages of the Internet, Gulbis understands that no matter how many endorsements she signs, no matter how well she performs in a video game, or how many hits her Web site receives, success boils down to performance.

“In 2003, I made a lot of mistakes,” she concedes. “I realized that course management was an issue for me. I made some poor decisions, posted a lot of high numbers, and that kept me out of some tournaments. That won’t happen this year.”

With its narrow fairways, deep bunkers, and exuberant galleries, the Dinah Shore Championship Course at the Kraft Nabisco will test Gulbis’ resolve, certainly, but the wonderful thing about youth is that its will is boundless, its hope is generous, and if Beatrix Hoyt happens to peer down through the clear blue March skies, the LPGA might just have a new champion on their hands. In the meantime, Gulbis is happy to keep perspective.

“I’m living my dream come true,” she says, and no matter how old she is, or whether she wins or loses, it’s hard to argue with that.