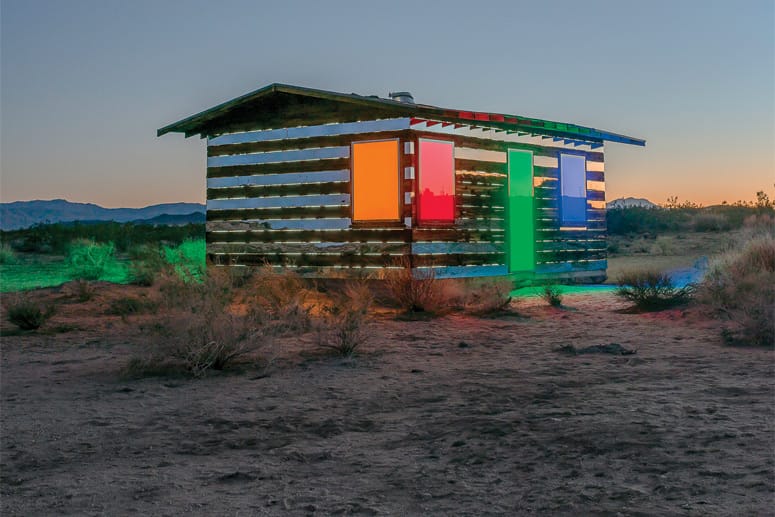 Philip K. Smith III’s Lucid Stead is a remote and ephemeral monument to light in all its shifting, blinding, beckoning, alienating, meditative, magical, natural, and artificial splendor. The site-specific art installation occupies a homestead location about 20 minutes outside of Joshua Tree — a skeletal shelter on five acres surrounded by 40 of federal land that Smith augments with one- and two-way mirrors, weathered wood, and interior light sources to create a temporary, yet epic work. While not officially part of High Desert Test Sites, Lucid Stead coincided with this year’s iteration, and Smith conceived it as a conceptual and geographical cousin — inspired by this “raw environment that invites investigation” — that will live in an indefinite and evolving state.

Smith, also an accomplished architect, has gained notoriety for his large-scale public sculpture in California, Arizona, Virginia, Tennessee, and Oklahoma. He was the 2010 artist in residency at Palm Springs Art Museum, where he created Aperture, a light-based sculptural installation “in a constant state of slow change.”

Lucid Stead is different from and on a continuum with works like Aperture, which demonstrates his architectural way of thinking about structure, scale, and sightlines. Smith uses combinations of high-grade plastic, steel, lighting, and electronics, but he reminds you that his light itself is his true medium. He uses LEDs to “extract the distilled experience of how light changes over time — how a mountain out here can be blue, red, brown, white, purple, and black all in one day,” he says. “Color creates space that’s both crisp and organic.”

Sounds like the words of a painter. In fact, Rick Royale of Royale Projects, the Palm Desert gallery that represents Smith and opened an exhibition of his work in November, places him partly in the context of what might be called desert painting. “Much of his passion and inspiration is derived from the distinctive desert light, the slowly changing colors of the landscape, and the unrestrained volume of its wide-open spaces,” Royale says. “These are elements that artists have marveled over for centuries. From the early California Impressionists to Light and Space artists such as Peter Alexander, Phillip consciously continues the historical lineage.”

Smith bought the five acres that became Lucid Stead in 2004. He grew up near Joshua Tree, had moved back from the East Coast several years earlier, and was pursuing his architectural practice as his visual art was coming to the fore. “I wanted to be in the raw, have the experience of no close neighbors. The desert is part of who I am. I missed my brown mountains and my open horizons.”

This relationship is paramount in everything he does — architecture, public sculpture, site-specific installation design, or some combination. The experience of Lucid Stead lands on this continuum, demanding the same kind of hyper-awareness and attentiveness as Aperture and his gallery works. It’s a durational spectacle; it requires a time commitment. Smith says the drive to Joshua Tree is “not the same as a trip to the museum. You have to really participate; you have to engage.”

In these ways, all his work hinges on experiential quality — and that is especially true with Lucid Stead.