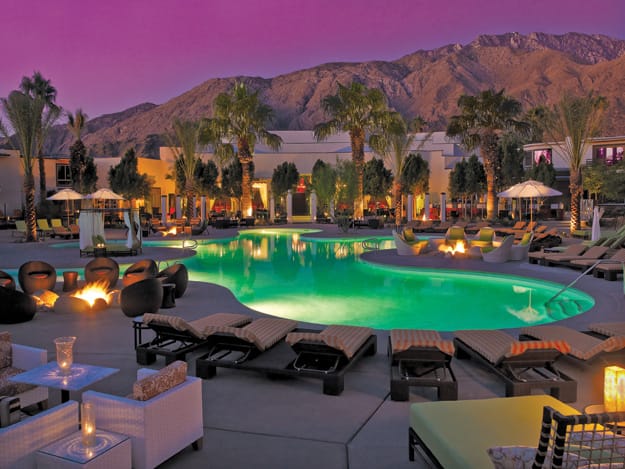 While burgs around the country fretted and feigned helplessness over the last year, Coachella Valley cities spruced up, attracted luxury retailers, and coaxed entrepreneurs out of hiding and into some of the best real-estate rates in decades. Here, we look at progress in the desert.

THE WILD WEST
Palm Springs has attracted its share of new retailers, ranging from the perpetually chic Design Within Reach, which opened during February’s Modernism Week, to Partylab Warehouse, the self-proclaimed “purveyor of mirth” brought into being by entrepreneurs Vicki French and Steve Lippman.

“Since we live in Palm Springs, it was important to us to stay local,” French says. “Opening our business here was a natural and easy decision. Palm Springs has a strong sense of celebration and fun in its community.” Last fall, as if to tout the viability of new construction, the city welcomed Dink’s Restaurant & Ultra Lounge, the city’s first restaurant built from the ground up for many years. Missouri-based Panera Bread felt so confident in the desert that the company chose to double-dip by launching two new bakeries: first in La Quinta, then in Palm Springs.

Trendy Ace Hotel & Swim Club took advantage of an opportunity to renovate a circa-1965 Howard Johnson motel into a cheeky hideaway with hip programming, while Riviera Resort & Spa and Holiday Inn underwent major renovations and emerged as glowing testaments to the viability of recycling real estate.

“We’ve seen some very positive success all around,” says Palm Springs Economic Development Administrator Cathy Van Horn, “especially in Smoketree Commons, which in June was already about 90 percent full with Jensen’s, Michaels, World Market, TJ Maxx, and Chipotle. … Five years ago, we didn’t have national chains like Chipotle and Rubio’s. Now we see that those national retailers are taking notice of the Coachella Valley.”

Cathedral City enjoyed a retail boon with the arrival of two Cardenas markets. “They hit a sweet spot in the Coachella Valley,” reports Steve Morris, president of the Cathedral City Chamber of Commerce. “By being a supermarket that focuses very heavily on the Hispanic market, they have a whole range of ethnic products you can’t get at Ralphs or Vons.”

You only need look to the streets for signs of another of Cathedral City’s new upstarts: Classic Yellow Cab, which came on board with a hundreds-strong fleet of canary-colored cars serving the entire Coachella Valley. Other new businesses in the city include Montage Healing Arts Spa, Sisters Cupcakes by Design, D&R Photography, and Johnny Pasta’s.

CENTERS OF ATTENTION
The streets of Rancho Mirage buzz with robust redevelopment. With the bulk of new business arising in the form of medical offices, the city enjoys an influx of complementary businesses such as Marivic’s Scrubs, a medical apparel supplier with an Indio operation that opened a second location on Bob Hope Drive last spring. Also known for its furniture stores, Rancho Mirage added to the list Plummers, a California chain that moved into a new space at Monterey Marketplace.

KP’s Golf Cars took up residence in the former Prosser Piano building on Highway 111. A bit farther west, a long-vacant building that formerly housed Dominick’s restaurant will get a spruce-up with the opening of Crab Pot, the second such restaurant in the valley (the first is in La Quinta).

As expected, Palm Desert continues to burst at the seams with opportunity. Along El Paseo’s sunny mile, Bottega Veneta, Vilebrequin, and Burberry opened their doors in late 2008 and were soon followed by Gucci, Ambiente, and red-carpet shoe impresario Stuart Weitzman. In The Gardens on El Paseo, Bare Escentuals Natural Cosmetics welcomed new customers, as did id, fine furnishings for the home. In an act of simultaneous confidence, id owner and local design entrepreneur Thomas Getz also launched Distinctive Interiors by Thomas, a full-service interior design studio, on the upper level of the plaza.

“From a business standpoint, I knew I didn’t want to be anywhere else than on El Paseo next to Saks Fifth Avenue,” Getz says. In late spring, he decided to experiment with a business practice that might make other entrepreneurs balk. “I actually ran an ad in the paper offering complimentary interior design services [a $195-an-hour service] in order to draw some new clients. I ran the ad for two weeks and managed to get 13 new design jobs within that two-week span. Now, for once, I can sit back and know that I have plenty to do in the coming months. I couldn’t be happier.”

Louis Vuitton will start construction at the end of 2009 on the Gardens space occupied by Banana Republic, which will relocate temporarily before opening in the new El Paseo Village in 2010. Look also for the opening of an Eileen Fisher store in November and the impending expansion and rebranding of Sunglass Hut, which will upgrade its inventory and reopen as the high-end Illori.

Across the street, construction on the 40,800-square-foot El Paseo Village, slated for completion in fall 2010, has geared up with vigor. Think high end and cutting edge. “The Village will feature Mastro’s Steakhouse, Kate Spade, and Juicy Couture,” says Palm Desert Economic Development Manager Ruth Ann Moore. Also on the docket: Lucky Brand, Janie and Jack, and bebe, as well as Banana Republic. In keeping with the greening of the desert, El Paseo Village plans to pursue LEED certification through solar-powered fountains and common-area lighting.

ENTICING LOCALES
Indio’s Enterprise Zone also attracts new businesses. “A lot of businesses that are deciding where to come into the Coachella Valley realize that if they can get these state tax incentives it makes it more attractive for them to come into our area,” says Mariano Aguirre, Indio’s development manager.

Coachella’s humble roots are mirrored in its businesses, which is just fine with Economic Development Director Lorie Williams. “We don’t get a lot of the new big-box stores that you see in other communities. That’s not the kind of community we are,” she says. “But what we do see are new locations for stores like Sally Beauty Supply, Juice It Up, and CVS [drug stores], as well as small entrepreneurs like Eye Sk-8 Shop and Minnie’s Ice Cream.”

NORTHERN EXPOSURE
Desert Hot Springs’ citywide focus on branding and strategic thinking appears to be working. “New retailers are starting to line up,” says Redevelopment Director Rudy Acosta. “In fact, we just approved a Fresh & Easy, which is big for this town because we haven’t has a national chain approach us in a while. This will set the tone for architecture, land use, and the aesthetic of future development.”

The success of the newly remodeled Bella Monte Hot Springs Resort & Spa serves as further evidence of this aesthetic direction. “With its kitschy past and forward thinking, Desert Hot Springs is the perfect example of a small town trying to improve itself and the lives of its residents,” says Assistant General Manager Deborah Sweigart Terrusa. Judy Bowman, president of the Hoteliers Association of Desert Hot Springs, agrees, “Bella Monte took a little spa hotel and did an amazing job redesigning it. And now it — and properties like it — are drawing visitors back to Desert Hot Springs and our miracle healing waters.”

Rather than fearing further economic mayhem, desert businesses have every reason to feel confident that the determination that got them here will carry them through like those miracle waters flowing beneath the sand. Credit proactive planning, bullish attitudes, and creative thinking for the entrepreneurial hum buzzing through the valley.