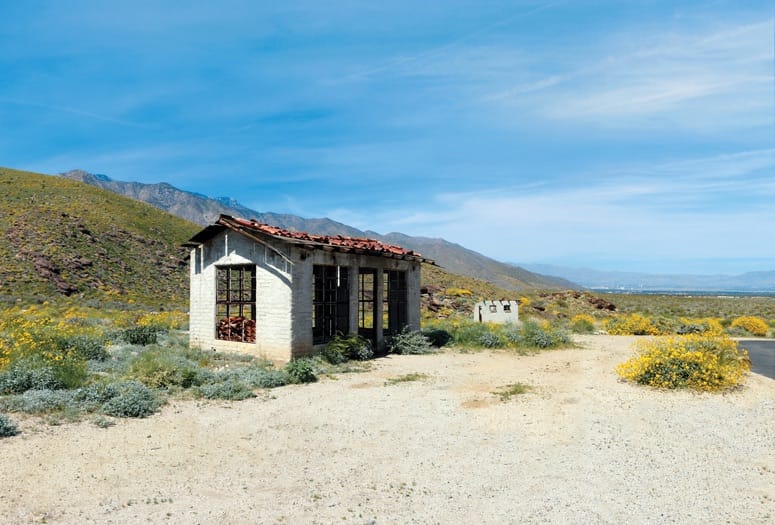 Making the winding drive from the Indian Canyons Toll Booth to the entrance of Palm Canyon is like entering another world; you become so immersed in the environment and its sweeping silence — nothing but vast, open desert in all directions — that the indices of modernity and civilization begin to fade away.

Then something unexpected appears on the periphery as you round the curved road: the remnants of a small, rectangular concrete building. Its gray walls and red clay roof tiles pose a striking contrast to nature’s surrounding color palette of browns, yellows, and faded greens … the rusty, paneled windows, bereft of any glass, and the doorless entry impart a feeling of nostalgia and desertion. The base of an old service station pump sits out front, the only indicator of its original purpose.

The story behind the Indian Canyons gas station is shrouded in mystery. Some say it begins, like so many tales in Greater Palm Springs, with Hollywood. Movie star and business mogul Marion Davies (also known for her 30-year romance with publishing tycoon William Randolph Hearst) reportedly owned the property that leads into Palm Canyon, which she eventually donated to the Agua Caliente Band of Cahuilla Indians. There was talk during this time of extending South Palm Canyon Drive all the way to the Pinyon Pines area, and one speculator is believed to have constructed the gas station in preparation for the future highway.

Though little evidence exists to confirm this theory, a written account by Millie Wolfe Fischer notes that the building, known as Gilman Oil Company station, was owned by one Ralph Marsh, who always kept “plenty of Orange Crush soda pop” on ice. He even made the occasional 5-gallon jar of lemonade and other homemade goodies for visitors passing by on their way to the canyons. Reportedly, he planned on building a place to eat across the road, and he may have gone so far as to begin a foundation for the project (no such foundation has been found).

Such a project would have likely required permission to bulldoze through Palm Canyon, which the Tribe would not have allowed.

This notion of an extension road through the canyons may have continued well into the 1980s, when a fire burned across the face of the mountain, dropping into Andreas Canyon. Some accounts describe attempts to direct the fire department to bulldoze a fire break on the east side of Palm Canyon (where the proposed road was to be built), but Tribal Chairman Richard M. Milanovich intervened, claiming there were ancient Indian burial grounds in their path.

Some Tribal members recall the small building and glass-domed gas pumps existing during their youth (which, according to local lore, were stolen by interior designers for “décor”), but they do not remember the station ever being used or in service. This token of the past remains as mystifying as the surrounding landscape, where time itself seems to stand still.