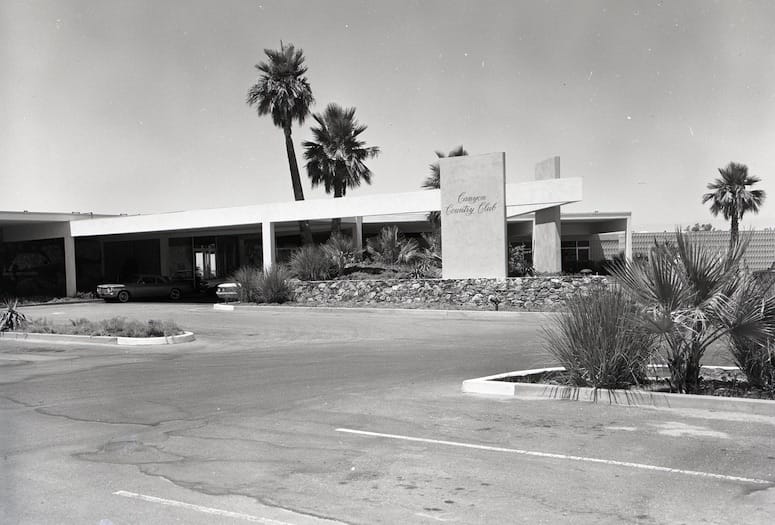 Originally opened on New Year’s Eve in 1961 as the Canyon Country Club, the South Palm Springs site comprised a 550-acre tract of land owned by several different tribal members of the Agua Caliente Band of Cahuilla Indians. After many years of complex negotiations, Harold Simon, a Palm Springs attorney, drafted the country’s largest Indian land lease in history for what would become the Indian Canyons Golf Resort.

At the time, it was a $20 million dollar investment as quoted by Robert Grundt in a September 1961 Desert Sun article. Grundt, head of the First National Realty and Construction Corporation based in New York City, noted that this was the first such development project the company had embarked on in the western United States.

That the company chose the sleepy town of Palm Springs for such a major project in the early 1960s underscores the seductive beauty of the desert environment even before the other 100-plus golf courses, luxury hotels, residential housing developments and other tourist-friendly amenities became part of the allure.

Designed by architects Donald Wexler and Richard Harrison, the clubhouse is a magnificent example of midcentury modern architecture. According to Sidney Williams, the former curator of the Palm Springs Art Museum, Architecture and Design Center and chair of the Palm Springs Historic Site Preservation Board for three years, the building has many distinctive architectural features. “The entry has a dramatic port cochere that shades the south-facing entrance,” she says. “The interior features a bow-shaped floor plan with double-height glass panels that frame the views of the golf course and the Disney fountain.”

The clubhouse itself had the stunning price tag of $1.5 million. William Bell designed the 18-hole course, which is now called the North Course. The builder was Russian-born New York master Boris Gertzen, who had retired in Palm Springs. Besides the golf course and clubhouse, the ambitious master plan included a hotel and a large tract of homes to follow. Gertzen astonished industry observers, investors, and local residents by completing the clubhouse in only 73 days. 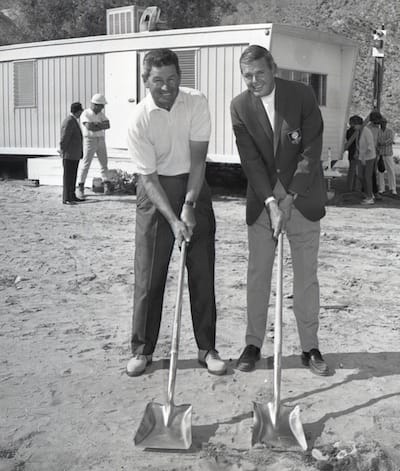 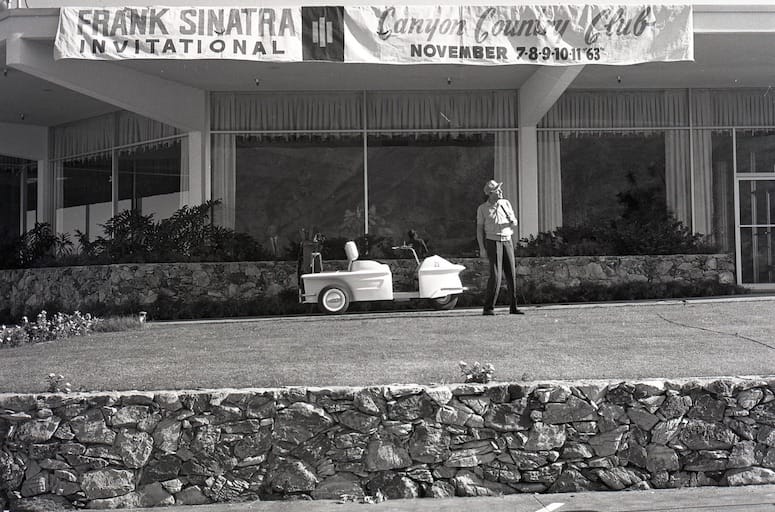 Frank Sinatra in front of the clubhouse at Canyon Country Club in 1963.

The list of luminaries who bought homes around the golf course was impressive — Walt Disney (he bought several lots), Tony Curtis and his wife Janet Leigh, Jerry Lewis, and many more. If the list of residents was a Who’s Who, the club membership also drew the likes of Jack Benny, Robert Wagner, President Gerald Ford, and others.

Indian Canyons Golf Resort was the first 18-hole golf course in the desert and hosted the first Frank Sinatra Invitational Golf Tournament. Disney gifted the large copper fountain designed as a floating lily pad that still resides on the expansive course between holes 9 and 18. Disney’s striking copper fountain with its 100-foot jets can also be seen from the clubhouse’s interior — like a sentinel of an illustrious piece of Palm Springs history. 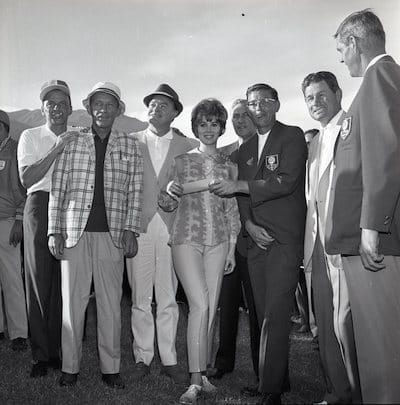 For decades, the Canyon Country Club hosted glitzy affairs and was one of Palm Springs’ social gathering hot spots. It has continued to host special events, although the clubhouse had been closed for a few years. It was reopened in November 2018 to the public for cocktails and light fare during limited hours. Owned and operated by the Agua Caliente Band of Cahuilla Indians, the Indian Canyon Golf Resort North and South Courses are open for public play while the restaurant at the South Course has continuously offered breakfast, lunch and dinner.

Todd Hooks, Agua Caliente economic development director, credits the local neighborhood association for being the impetus for the reopening. The Indian Canyon Neighborhood Association embarked on a fundraising campaign that raised $160,000 to staff and operate the architecturally significant Wexler-Harrison clubhouse. The spirit of fun and conviviality are once again alive and well there.

The Party Has
Never Stopped

Today, the Indian Canyons Country Club still hosts weddings and a variety of special events such as “Modern Love,” which is the opening night party on Feb. 14 for Modernism Week.

Besides the sublime architecture of Indian Canyons Golf Resort, “Modern Love” will give guests plenty of reasons to rave: music, food (catered by Lulu California Bistro), and mondo cocktails of the era. 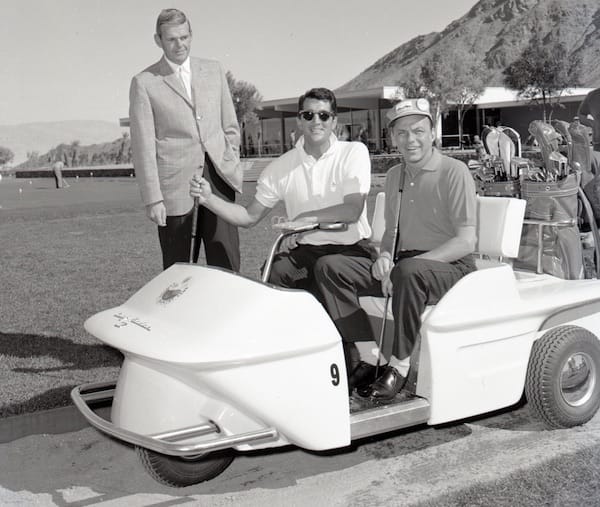 The party is made for hitting the dance floor with music featuring DJ Baz, who will spin retro tunes. Guests will also sway to the 12-piece Casino Royale Orchestra, which will bring back favorite 1960s musical classics of Burt Bacharach, Herb Albert, Dusty Springfield and others.

“Modern Love” is being produced by Momentous Events and Modernism Week and being presented by major sponsor Ferguson Bath, Kitchen & Lighting Gallery.