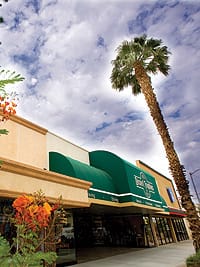 Indio City Councilman Ben Godfrey had an idea — a big idea. He envisioned a state-of-the-art transportation center, a place that would provide the spark of activity his city needed. It was something Godfrey fought hard for — and won. Fifteen years later, the Indio Transportation Center is becoming a reality.

“The original railhead of Southern California was here at one time, and the city was literally founded by the railroad as it came through from Yuma,” says Godfrey. “This is the start of the Old Town renaissance. Just look around — it is underway.”

Two years ago, Indio’s Redevelopment Agency contacted developer Tom Emmett and asked him to transform the 6 1/2 acre property at Indio Boulevard and Civic Center Drive into a travel mecca. No small feat, but Emmett set out to design what will become a key component of Indio’s downtown revitalization.

“Our goal is to make it easier for people to get in and out of the valley without having to deal with the traffic issues that plague so much of Southern California,” explains Emmett, a partner in KEB Enterprises, L.L.C. “But this will be more than just a place for travel. We are trying to design it so that anywhere you go inside the station, you can view interesting history and memorabilia as it relates to Indio and California. This will be a destination in the finest sense.”

The center will be open seven days a week, 24 hours a day. Plans for the more than $6 million facility include a pedestrian intersection at Civic Center Drive, with restaurants, a bank, space for professional offices, as well as taxi services. Locally owned Aztec Rent-a-Car will also have an office there, and shuttle service will be offered to and from valley casinos. Crucero, Sunline, and Greyhound bus lines will service the center, as will Amtrak’s Sunset Limited train, which is scheduled to make at least two stops a day there.

“Ideally, patrons will enjoy dinner here, then head over to the Indio Performing Arts Center for a great show,” envisions Emmett. “As for dining, we’ve already signed a big name here in the valley, a place that is well established and very popular with locals. They’ll offer breakfast, lunch, and dinner seven days a week here. We’re thrilled that they’ve decided to join us here. I feel it is so important to have local flavor in a place like this.”

Emmett has also incorporated a plaza with a reflection pool in the design, a place where citizens can go to honor the sacrifice of American troops during special events on Memorial and Veterans days. Emmett is also in talks with the Railroaders Association to put in a model railroad at the center, which can serve as an educational conversation piece for kids and adults alike.

There will be a green element to the design of the 17,000- square-foot center. Emmett is purchasing solar panels and glass that will help control lighting costs. His goal is for the property to cull at least 30 percent of its energy from self-generated power.

“You can get more voltage per square inch now with newer, smaller solar panels,” he explains. “The solar glass will cut our bills substantially, which the tenants will certainly be happy about.”

Some of the monies for the Transportation Center come from Indio’s redevelopment funds. The city has also agreed to lease the land to Emmett for $1 a year. He admits the project would not have been possible, had it not been for the city’s tremendous cooperation.

“They are allowing me to turn a vacant area into something beautiful. On top of that, we are giving everyone transportation and a place to hang out and have fun. This sort of thing doesn’t happen all the time,” he marvels. “The city has spent their redevelopment funds wisely in order to make this happen.”

Emmett hopes for a fall groundbreaking with a grand opening projected for summer 2009.

Getting Kicks on Another Notable Road: California’s Highway 99 Revisited

It is sometimes called “The Main Street of California.” Historic Route 99 is the only road of its kind that connects three countries (Mexico, US and Canada), and for those who have roots in the city of Indio, the connection to the history of this grand highway is strong.

“I’ve always loved old roads, especially this one,” says Indio’s Bruce Clark, a man whom many in town consider to be the foremost historian on Historic Route 99 (Indio Boulevard). “Route 66 is more famous, but the way it got that famous was through the song. I’ve always liked to say, ‘After you get your kicks on Route 66, come wine and dine on 99!’”

Clark has been collecting old highway signs for years and has several from Route 99, which was designated a historic highway in 1993. This north-south state highway began as a horse and stagecoach trail and runs as far north as Canada and as far south as Mexico, stretching almost the entire length of the Central Valley. It is mentioned in the John Steinbeck classic The Grapes of Wrath as the main road used by the Joad family during its travels through California.

“It was the highest-traveled truck road in the U.S. back in the 1920s and until the early 1960s,” says Clark. “The whole thing is scenic, going through central California, Washington, and Oregon — beautiful all the way. You could see all the old places like old vintage motels. Then Interstate 5 came along and put a lot of the mom-and-pop stores out of business. But they were neat little places to experience.”

Before his retirement last year, Clark owned and operated Clark’s Truck Stop in Indio for more than three decades. Some time before he sold the business, Clark decided to establish a free, on-site museum there.

“I put all my old memorabilia up on the walls and people loved it. I have a postcard collection of more 700 cards, just on Route 99. People would come in from all over the country. They would tell each other to stop in and see the collection. So many would come in and reminisce about staying here in the old days.”

Ironically or perhaps fittingly, Clark’s Truck Stop (now Clark’s Travel Center) is the oldest known truck stop still in business on Route 99. A highways mural on one side of the Travel Center building depicts Indio’s portion of Highway 99 as it looked during its early years in the 1920s and 1930s.

Bruce Clark is still active in educating the public on the history of the road he loves. He plans to donate his collection of transportation signs and memorabilia to the city for its new transportation center.

“It is going to be a big benefit for Old Town Indio and the people who live in this area. It’s wonderful that we can blend the old with the new here. We can’t forget our history. That is the essence of Route 99. It’s all about families — parents telling their kids what they did, where they went in the past. They want their kids to experience it too so they don’t lose that heritage.”

Indio’s Downtown Gets a Facelift

Along with the addition of the city’s Transportation Center, Indio’s downtown Miles Avenue is now home to several successful businesses. The city has attracted Precision Auto Sound, Together Forever Wedding Boutique, Old Town Café, and Amazon Spa to this growing area.

“It is very exciting to see new storefronts and businesses emerging,” says Elaine Holmes, owner of PJ’s. “We wholeheartedly support the city’s vision for creating a village atmosphere. When the renaissance is complete, it will make downtown Indio the place to shop, dine, and enjoy nightlife.”

Mayor Lupe Ramos Watson was born and raised in Indio, and remembers what the city was like in its heyday.

“There was a lot of activity and excitement there. My brothers and I used to walk over the railroad tracks on Saturday mornings,” Watson recalls. “We used to spend the day walking around trying to decide where to spend our earned allowance of 50 cents. There was a vibrant housing area here, surrounded by retail, restaurants, ice cream shops, and a movie theater,” she says. “This growth is really something to look forward to, and I am happy to see we are beautifying and greening this area.”

A multimillion dollar downtown infrastructure improvement program is scheduled to begin soon. Phase 1 improvements will include Miles Avenue between Oasis and Smurr streets and Towne Street between Indio Boulevard and Bliss Street. The proposed project along Miles Avenue will remove the one-way street section and provide two way travel with parallel parking on both sides of the street.

“Downtown redevelopment has always been my passion, and my staff is working very hard to bring this area back to its former glory as the hub of the valley,” says City Manager Glenn Southard.

In addition, a new pavement section, sidewalks, street lighting and landscaping will be installed with this initial phase of construction along both Miles Avenue and Towne Street. In anticipation of the undergrounding the overhead utility lines, a conduit bank will be installed for the Imperial Irrigation District, Verizon, and Time Warner facilities. The bulk of construction along Miles Avenue will occur in October and November.