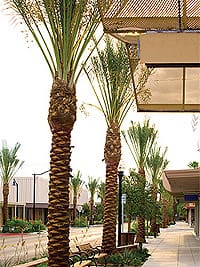 One desert city is not letting the national economic slowdown affect its progress! Indio, the largest city in the Coachella Valley, is on a steady path toward smart development with targeted infrastructure improvements spearheading its transformation into a vibrant urban oasis.

The quality of life in this City of Festivals continues to improve. From new shopping centers to street upgrades to renovated parks, visible enhancements to Indio’s overall landscape can be seen throughout the city.

According to Indio’s Mayor, Melanie Fesmire, residents are responding positively to the significant infrastructure improvements. “We’ve got our work cut out for us, but we have made a conscious effort to continue the momentum that has brought a multitude of enhancements to Indio,” Fesmire explains. “We have a number of infrastructure projects underway, and we’re excited about the transformations that are taking place in our community.”

The American Recovery and Reinvestment Act of 2009 afforded Indio the unique opportunity to create new environmental sustainability programs through a federal Energy Efficiency and Conservation Block Grant. The $780,000 in grant funds awarded to Indio will be used to launch several job-creation programs and introduce energy conservation ideas to residents. Additionally, Indio will assess the community’s energy usage to help identify sites in need of home and commercial audits. Grant funds will also allow for an expansion of recycling programs for local schools.

In developing the 2009-10 city budget, city staff carefully, and without losing sight of its long-term vision and goals, analyzed revenues and expenditures and recommended realistic numbers in both categories. Indio plans to spend more than $70 million of its capital improvement budget over the next year in a variety of areas:

Indio has earmarked $28 million to continue improving the city’s water system and increasing its storage capacity. Projects include the completion of the city’s corporate yard, a new booster station, a new 2.5-million-gallon reservoir, and a new 5-million-gallon elevated reservoir called Lost Horse Reservoir.

Construction on the reservoir, paid for with a $6,350,000 bond, began in July of this year and should take a year to complete. Last year, Indio built a reservoir similar in size at Avenue 45 and Jackson Street and is constructing an additional 2.5-million-gallon tank at Dr. Carreon Park to supplement the 2-million-gallon tank already in place. Indio has also drilled three new water wells in as many years, and is in the process of equipping those wells.

Also due for installation are two miles of new pipeline connecting the Lost Horse Reservoir to the municipal water system, a new water recharge facility at Posse Park, and infrastructure upgrades to improve water delivery. In the last three years, Indio has tripled its emergency water storage capacity and is looking at a regional approach to sustainability through conservation, reuse, and new sources.

Twenty-seven million dollars is committed to improve the city’s roads and bridges by repaving another 17 miles during the coming fiscal year. Major street projects include Phase VII of the city’s Street Rehabilitation Program; improvements to Monroe Street from Avenue 49 to Avenue 52, citywide bridge upgrades, Madison Street pavement rehabilitation from Highway 111 to Avenue 46, Clinton Street widening from Miles Avenue to Fred Waring Drive, the widening of Varner Road from CHP headquarters to Jefferson Street, the completion of Golf Center Parkway from Highway 111 to Interstate 10, the design of the Jefferson Street and Interstate 10 interchange project, and the continuation of improvements to Highway 111 from Madison Street to Monroe Street.

This past year saw the completion of the North Jackson Park renovation. With the completion of this project, all the existing parks in the city are now fully renovated. Families have returned to our parks! The 2009-10 CIP budget includes $3 million to continue improving existing parks, to design and build a park on Hjorth Street, and to continue the design of the proposed Central Park at Jackson Street and Market Street.

Downtown redevelopment continues to move ahead. The 2009-10 budget includes roughly $8 million for the next phase of the downtown infrastructure project. Additionally, redevelopment staff continues to work with downtown merchants to improve facades and expand local businesses. Commercial recruitment and expansion activities are occurring throughout the community to increase and expand tax revenues.

“We are so happy to see this new side of downtown emerging,” says City Manager Glenn Southard. “The city has developed a great vision for a vibrant village atmosphere, and we are so fortunate to have our merchants supporting the effort wholeheartedly. Downtown Indio is truly becoming the place to shop, dine, and enjoy nightlife; and we are quite proud of these changes.”

There are other citywide community-building efforts of note. With the opening of the Indio Senior Center in September, the city’s Intergenerational Campus is one step closer to completion. The campus is comprised of the Indio Teen Center, the new Senior Center, Indio High School, Coachella Valley Parks and Recreation, and the Indio Library and Community Center, which is in the design phase.

“This is an exciting and unprecedented time for Indio’s older residents,” says Mike Moreland, the city’s human services supervisor for seniors. “People are going to be awed when they come into our center. They’ll be greeted by a magnificent water fountain at the entrance and can tour our state-of-the-art facility, which is unlike any other in the valley.”

The campus properties are so intertwined that visitors can see all three buildings from the corner of Shadow Palms Road and Avenue 46, a proximity that officials believe will change the dynamic of that part of town and increase foot traffic there.

As California’s economy and that of the nation start to improve, the city is ready to reap the benefits, one project at a time. Through careful and insightful planning and with an eye toward the future, Indio is shining brighter than ever.