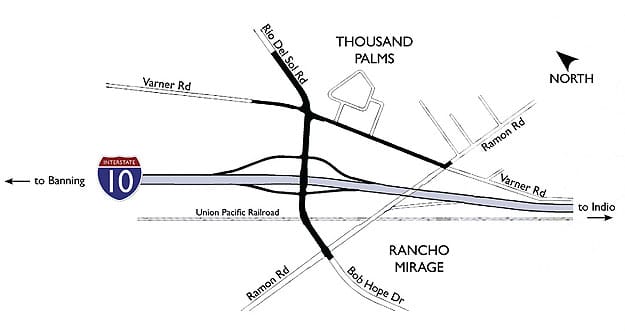 When Renald Anelle opened Little Sister’s Truck Wash 14 years ago, he was told the Interstate 10/ Ramon Road interchange just west of his Varner Road business was going to get a new off-ramp. This past February, the California Department of Transportation began moving earth there in the first stage of the Coachella Valley Corridor Improvement Projects.

“We have been looking forward to this for many years,” Anelle says. “The traffic has been growing progressively. The problem is the off-ramps and the congestion that occurs there. I have seen cars stacked up, even on the freeway, 10 to 12 deep.”

In addition to the truck wash, Ramon/ Varner businesses include gas stations and fast-food eateries. In particular, Little Sister’s and Flying J truck stop bring a lot of big-rig traffic off the interstate. “That’s another key point,” Anelle says, noting that two to three large trucks can consume 200 to 300 feet of precious roadway. When work is completed, I-10 traffic will be rerouted to a new interchange — with additional lanes — just west of the current one. “The new setup will keep traffic moving,” asserts Anelle, who has been attending public update meetings and speaks highly of his dealings with transportation officials.

In the planning stages since 1994, the Ramon Road project was “shovel ready” — and thus received $39.4 million in federal stimulus funds. But the lower-than-estimated cost allowed the Coachella Valley Association of Governments to ask the Riverside County Transportation Commission to reallocate funds to other interchanges. Additional funding comes from federal, state, and county programs and fees; Measure A taxes; and contributions by Riverside County and the cities of Desert Hot Springs, Palm Springs, Cathedral City, Rancho Mirage, La Quinta, and Indio. With staggered starting dates and the construction at each interchange taking from 18 months to two years to complete, the corridor project should be complete in 2014.

Loops will replace straight-line, onand off-ramps; palm fronds and Cahuilla basket designs will be stamped in concrete on the pillars and rails; script lettering will be mounted on overpasses; and sixlane bridges will include bike lanes(!) as the I-10 corridor through the Coachella Valley gets fancified.

More importantly — at least for those who like to travel from Point A to Point B without getting bogged down where the interstate meets the road — is that the bridges, ramps, and surface roads are being widened and realigned to improve that all important traffic flow.

The last interchange on the schedule (expected to begin in 2012) is at Jefferson Street. It involves a new six-lane bridge with bicycle lanes and a sidewalk on the northbound side, realigned off-ramps, new two-lane loop on-ramps, new traffic signals, and a realigned and widened Varner Road.

Those who want to track the progress of work on the interchanges — or check for traffic delays caused by construction — can view live camera feeds at www.i10cvcprojects.com. Recorded in 15-minute intervals, the videos will ultimately be put together for a time-lapse documentation of construction.