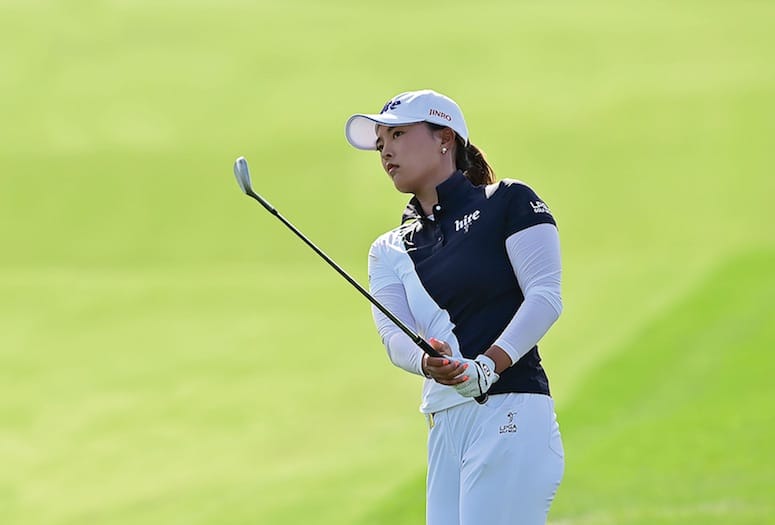 As she sits at the pinnacle of the Rolex World Rankings, Jin Young Ko, the reigning ANA Inspiration champion, realizes she’s had quite a year.

Last year’s winner of the Louise Suggs Rolex Rookie of the Year award, Ko arrived at Rancho Mirage as under-the-radar as a player could be after finishing third or better in five of her first six starts of the year.

While most prognosticators were still focusing on the likes of Lexi Thompson and Sung Hyung Park, others in the golfing know had at least an eye on this popular South Korean player, whose sunny disposition has gained her an army of fans all around the world known as the “KoKos.”

Having learned to win on the Korean LPGA Tour, amassing 10 victories, Ko won the ISPS Handa Women’s Australian Open in her rookie season. She secured her second LPGA title only a couple of weeks before.

Ko, who was in fifth place on the Rolex Rankings ahead of the 2019 ANA Inspiration, saw her maiden major catapult her both into Poppie’s Pond and to the top of the Rolex Rankings. Having taken a one-stroke lead into the final round, the 23 year old shot a two-under par 70 and won by three over M.H. Lee. It was as stress-free a closing round as you could imagine for a first-time major winner as she hit 12 of 14 fairways and 14 of 18 greens in regulation.

Since her desert victory, Ko has added a second major title — the Evian Championship — and last September, she won her fourth title of the year at the CP Women’s Open as part of a remarkable blemish-free performance which extended to a phenomenal run of 114 bogey-free holes.

In October, Ko further strengthened her hold on the No. 1 position on the Rolex Women’s World Golf Rankings when she claimed the 10th KLPA title of her career, winning the Hite Jinro Championship, one of the KLPGA Tour’s four Major Championships.

With so many goals ticked off the bucket list, Ko clearly has no problem finding inspiration, with the aim of making the 2020 Olympics team clearly front of mind in the coming months. “I’m excited,” she says. “I’m excited at the thought that I might play in the Tokyo Olympics, because for Korean players, it’s really important. The Olympics, like gold, silver, bronze, everything about it is special. So I really want to play in Tokyo and will be trying my best to qualify.” 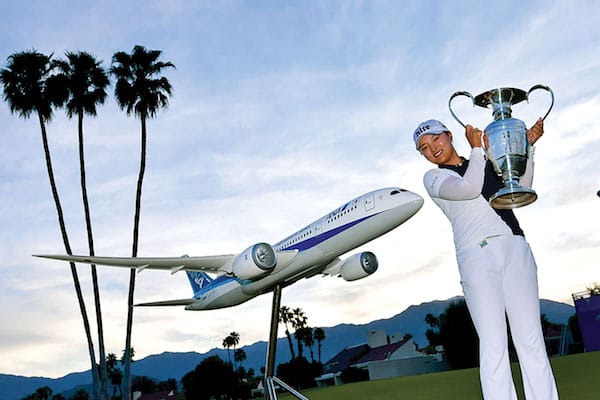 As defending champion, Ko will be one of many Olympic hopefuls returning to Rancho Mirage next year looking to secure their qualification with an impressive performance at golf’s first major of the year.

Each will need to qualify in their own right for the Olympics to secure the chance to defend their medals and a win at the 2020 ANA Inspiration would certainly help secure their place.

With her image likely to be adorning all the tournament posters, Jin Young Ko certainly won’t be returning to Mission Hills under the radar next year, nor will anyone be surprised to see her make a return to Poppie’s Pond at the end of the week. Indeed, seeing her on a podium in Tokyo next August could seem par for the course.

The 2020 ANA Inspiration will mark the 49th edition of one of the most established tournaments in the U.S. Every edition has taken place at Mission Hills and, since it launched in 1972, the ANA has become one of the most coveted titles in golf. 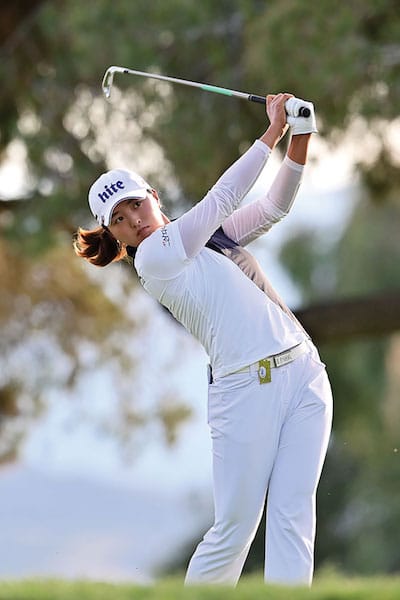 Ko’s aim of making the 2020 Olympics team is front and center in her mind in the coming months.

The international nature of the tournament is exemplified when looking at the winners’ roster over the last 20 editions, where eight different nationalities are represented. America and South Korea are tied with five wins each, while others include Sweden, New Zealand, Taiwan, Mexico, Australia, and France.

English golfer Georgia Hall, winner of the 2018 Women’s British Open, considers the ANA Inspiration one of the best tournaments on the LPGA. “It is a bit of everything really that all adds up to make it one of our favourite events,” the 23 year old explains. “The weather, the course, the set-up, the fans, the atmosphere. The minute you arrive, it feels ‘major’ and you get a really strong feeling that it is an event of a different caliber. I love it, and this year I made the cut for the first time, so I do feel as though I am making progress towards my dream of one day making the leap into Poppie’s Pond.” 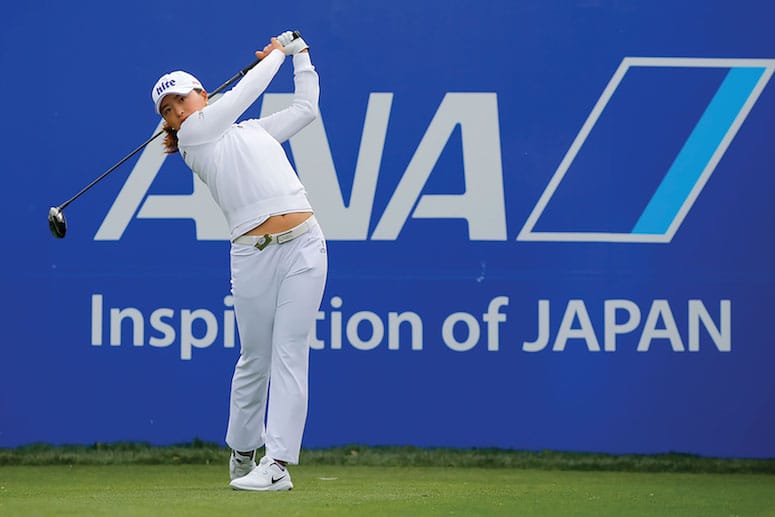 Sweden’s Helen Alfredsson, who won the title in 1993, remains an admirer of ANA. “The event has such history and an unbelievable loyal and knowledgeable fan base,” she states. “A lot of us slightly older players love to return there each year as no event looks after the past winners and history of the tournament like the ANA Inspiration.”

Every year, many LPGA legends are invited back to play alongside the juniors in the ANA Junior Inspiration. Last year’s winner, Cindy Kou of Windermere, Florida, earned the final amateur exemption into the tournament-proper by winning a thrilling three-hole playoff.

This tradition began back in 2012, when juniors in Southern California were invited to compete for the final amateur exemption in the first women’s major of the year. As part of ANA’s innovative and holistic sponsorship approach, the ANA Junior Inspiration was upgraded in 2016, extending additional invites to 10 female junior golfers from ANA’s North American gateway cities. In 2017, it became an official American Junior Golf Association (AJGA) Invitational based on AJGA Rankings points, attracting a stellar field consisting of a diverse and elite group of female junior golfers from all around the world.

It was no coincidence that the legend playing alongside Kou in her final round was none other than the 1998 champion, Pat Hurst, whose expertise and guidance no doubt contributed to Kou’s triumph.

The tournament hosts a special dinner early in the week to celebrate their past winners. It is as well attended and valued as any invitation a player will receive throughout the year. With Ko adding herself to the 2020 guest list, all eyes will be on who will win the ANA Inspiration next April to secure their place at the table when the tournament celebrates its 50th edition.

For more information and to purchase tickets to the ANA Insiration, visit anainspiration.com. 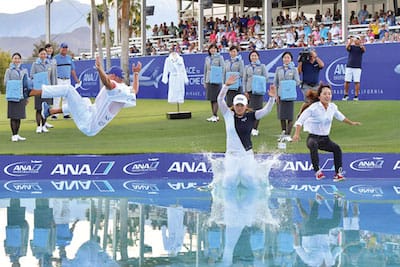 Ko achieved a dream of winning the ANA Inspiration trophy and leaping into Poppie’s Pond. 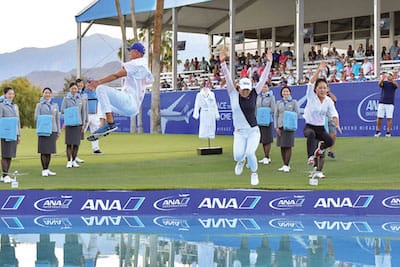 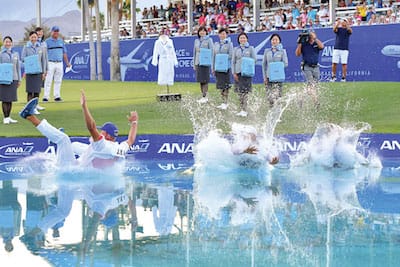