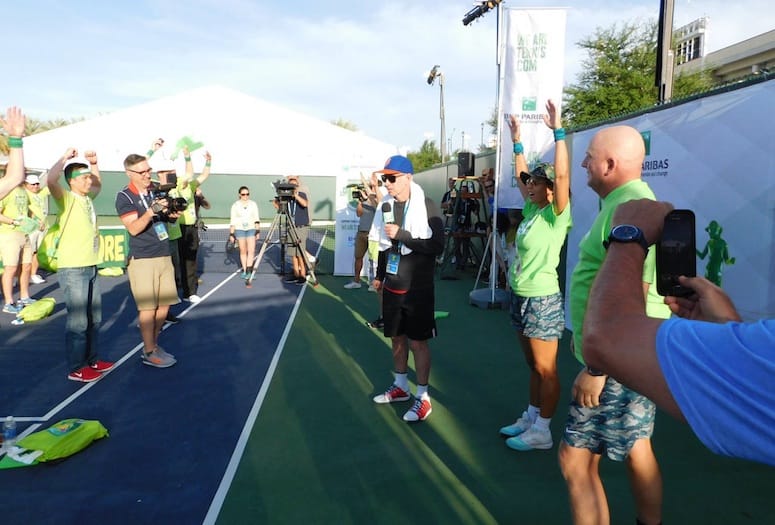 John McEnroe has a sense of humor. He also has major star power. Put the two together and you get a passionate McEnroe leading the charge for new tennis fans.

McEnroe has put his celebrity status behind a five-year old initiative to bring new tennis fans to the game. The “We are Tennis Fan Academy” has, as its leader, one of the most intense tennis players of all-time. During the BNP Paribas Open, McEnroe’s star-status was on full display as he led “We are Tennis” fans onto the courts at Indian Wells Tennis Garden.

VIDEO: John McEnroe says tennis is not reaching younger audiences like it once did.

It was a sight for sore eyes seeing Johnny Mac lead his “team” in chants, drills, and tennis jargon. While it was all in good fun, don’t think McEnroe isn’t serious. He thinks the game is fading and needs a boost of energy to attract the next generation of tennis fans.

“We are seeing the best players in the world today, “ said McEnroe from the Tennis Warehouse promo court at the BNP Paribas Open in Indian Wells. “But the game isn’t as fun as it was when I played, when Jimmy Connors played.  We need to bring the fun back into the sport.” John McEnroe with “We are Tennis Fan Academy” devotees.

Fans from all over the country flocked to Indian Wells to hear McEnroe’s message. “I love that he put himself out there to help promote the game,” said Chung Lee, who traveled from New York City. “This is exciting for tennis.” John McEnroe fires up “We are Tennis Fan Academy” members.

One thing is certain. If fans are looking to have fun with McEnroe, they came to the right place. He was leading them in chants supporting Rafael Nadal, and making his charges “give him 50” if they didn’t straighten up. All-in-all, it was vintage McEnroe.

“He brings an energy to the game that has been missing,” said Anna Cole from Philadelphia.  “If anyone came bring people to the game of tennis, it is John McEnroe.”