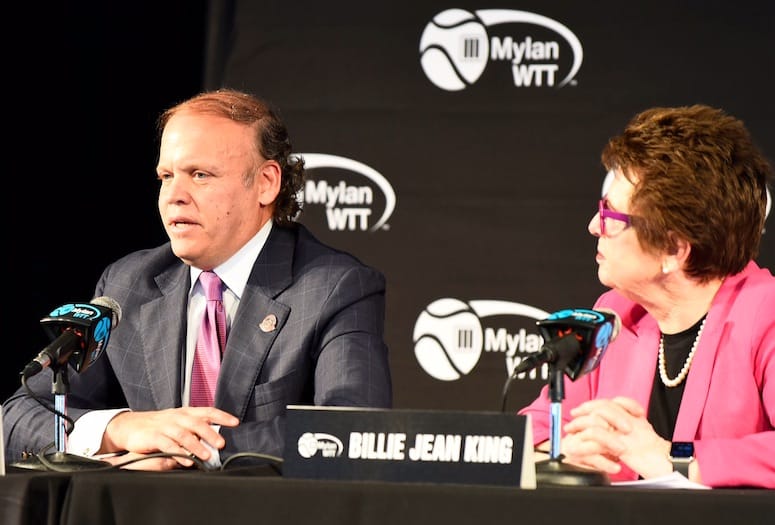 Billie Jean King was at a tennis tournament Monday, the BNP Paribas Open Indian Wells. It has been a long time since any appearance she makes has been strictly about tennis.

This was a press gathering concerning the transfer of King’s majority interest in World Team Tennis to businessmen, Mark Ein and Fred Luddy. This was supposed to be about them, but it never will be with Billie Jean in the room. Nor do they object to that.

“She is the most influential female athlete in history,” Ein said. “Maybe not just female.”

Billie Jean King came out of the public tennis courts of Long Beach and went on to win 67 tour singles titles and 12 majors. Her legacy is so revered that the United States Tennis Assn. placed her name on its massive U.S. Open facility in Flushing Meadows, outside New York City. It is the Billie Jean King Tennis Center.

“I still don’t get that,” she says, not out of false modesty, but out of ongoing amazement that a pig-tailed kid from Long Beach, Billie Jean Moffett, who hit tennis balls quite well, could end up with her name in the brightest of tennis lights for at least two weeks a year. That’s especially true because of her willingness to be open, at a time, the 70s and 80s, when openness was much less accepted. She had married Larry King, with whom she began the Team Tennis concept. Then they split when she came to grips with her homosexuality and told the world about it.

In the ‘70s, the world, especially the sports world, wasn’t quite ready. But Billie Jean King has never been one to wait for the world to be ready for her. She just kept being open, following her heart, and carrying on with a tolerance and belief the world would catch up. And it mostly has.

She is 73, and there was a sadness in her voice when she said at Monday’s gathering, “I thought I would see a woman become president of our country, but I don’t think it will happen in my lifetime now.” 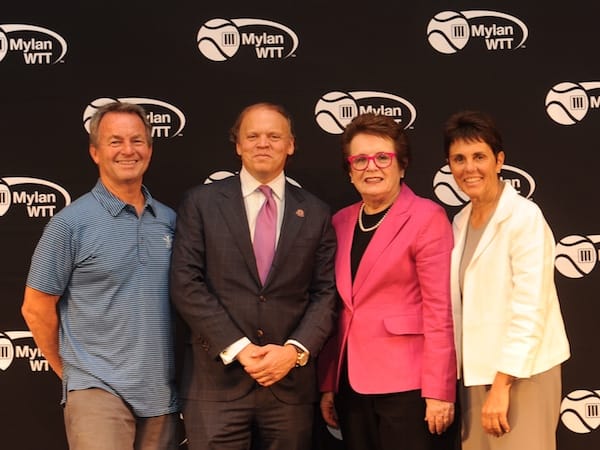 She is a longtime friend and supporter of Hillary Clinton. When Clinton lost her bid in 2008 for the Democratic Party nomination to Barack Obama, she called Clinton and asked if she should support Obama. The response was a ringing yes.

This was not a press gathering about politics. The formal part of it was explaining why it was important for Ein and Luddy to take over her beloved WTT, why you “need to know when to pass the torch,” and to not do it when you are too old or too disconnected. Despite its more than 40-years, World Team Tennis remains a floating bubble in the champagne of tennis. Its annual season is about three weeks of competition, currently with six teams, right after Wimbledon and before the start of the summer season leading to the U.S. Open. Name players compete, but often not the biggest names. In those six cities, it is popular and fun for the fans. The courts are brightly colored, the games go fast, there is always music and lots of smiles and celebrating.

The teams are also co-ed, which is now and always has been King’s message: Inclusion. She did not receive a Presidential Medal of Freedom because of her great forehand.

In the reporters’ scrum after the formal press conference, King was clear about the same message of inclusivity she has championed for nearly 50 years, especially with her classic and symbolic victory over Bobby Riggs in the Houston Astrodome in 1973. She rode in on a chariot meant to mock her femininity and then rode Riggs out of the stadium with her athleticism.

“We are in a time now, more than ever,” she said, “when we need to champion inclusion.” She talked to the ubiquity of misogyny in our world today and pointed to the WTT championship trophy, the King Trophy, as the symbol of her thinking and living. The trophy has five figurines in a circle, two men, two women and a coach, their arms extended upward and forming the base of a bowl.

She also said that, what this generation is going through is not unconquerable, nor have the challenges of other generations been.

“It is a good that we are concerned,” she said.

Throughout the discussion, there was an elephant in the room. King named no names.