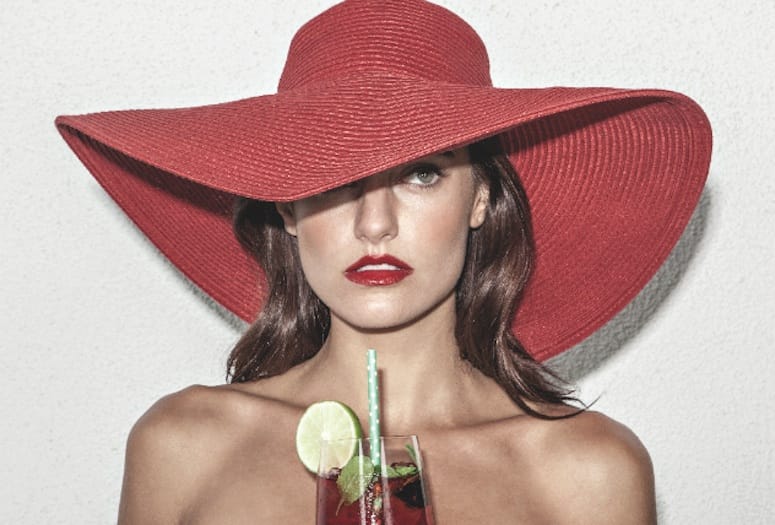 VIDEO: Gain a behind-the-scenes look of the fashion shoot at The Avalon.

La Ronde (originally, Reigen) is a play written by Austrian writer Arthur Schnitzler in 1897. Ten pairs of characters interact before and after their sexual encounters. It’s no surprise that the play was highly controversial and not performed publicly until 1920. It has been suggested that the subtext of the play by the qualified physician was how venereal disease was transmitted across social and economic lines. Schnitzler’s play is better known by its French title because that was its title in the 1950 film by famed director Max Ophüls.There have been many “loose” adaptations. American director Alan Rudolph’s 1984 film, Choose Me, is said to be inspired by it. (Natori silk embroidered caftan, $3,500, Saks Fifth Avenue, Palm Desert; Dior sunglasses, $350, Wil Stiles, Palm Springs.). The original concept for the Palm Springs Life shoot was to show encounters between the characters in the large cabana at the Avalon Hotel as if it were a theater stage. After seeing the Avalon’s grounds, photographer Fredrik Brodén decided to create multiple set pieces. This shot was the only made in the main cabana (Her: Versace black jersey tank dress, $1,300; Joe Vilaiwan crystal necklace, $880; Barbara Bui silver handbag, $660; Pollini black strappy shoe, $960; Him: Belvest black dinner jacket, $4,195; Ermanno Scervino tuxedo shirt, $510; all available at Presage.) . Several of Newton’s most famous images, such as Jail Bait, were made in Palm Springs. He died in 2004 when his car went out of control in the driveway of Hollywood’s Chateau Marmont. (Him: Eight X patterned shirt, $169, at Wil Stiles. Her: La Perla green triangle G-string, $170, and triangle bra, $310, at Presage; Trina Turk paisley blouse, $258, at Trina Turk, Palm Springs; Dior sunglasses, $320, at Wil Stiles.). In addition to hotel rooms, 13 one- and two-bedroom villas populate the grounds of the Avalon. As evidenced by this encounter between Logan and Yasmina, secluded space is abundant on the Avalon’s grounds. (Her: Maison de Papillon white silk tuxedo camisole, $225; Maison de Papillon black charmeuse boxer short, $165, at Presage. Him: Vince Woodhall blue jean, $175, Presage.).