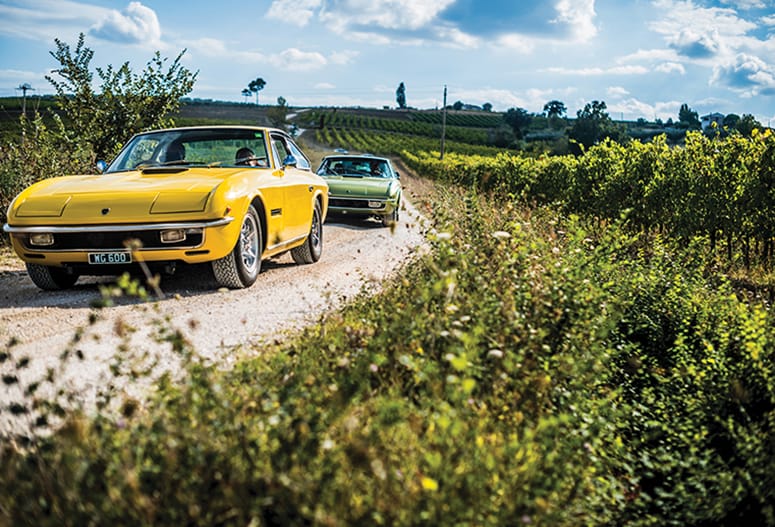 To celebrate the 50th anniversary of Lamborghini’s Espada and Islero models, a group of 20 auto enthusiasts toured some of the most picturesque scenery in Europe.
PHOTOGRAPH BY REMI DARGEGEN/ COURTESY AUTOMOBILI LAMBORGHINI

Traveling to Italy in September is almost always a delight. Spending that time traversing 500 miles through the hills of Umbria, Tuscany, and Emilia in an Italian sports car is something else entirely. And while it seems a bit odd to celebrate a 50th anniversary in a place imbued with centuries of history, that’s exactly what I came to do.

Automobili Lamborghini invited me to commemorate the 1968 introduction of its Islero and Espada models with a road trip. Organized by Lamborghini Polo Storico — a recently established factory division that supports vintage automobiles through research, certification, parts, and restoration — our itinerary combined great roads, hotels, food and wine, and camaraderie in a way that only Italian hosts in their homeland can.

I found myself with the owners of 16 vintage Espadas and Isleros, along with Lamborghini staff and management, on a voyage of the heart, mind, and soul. The experience coincided with a personal anniversary: It had been 10 years since I sold my 1969 Lamborghini Islero, and I was eager to reacquaint myself with the joys behind the wheel. Only 125 of these gentleman’s expresses were built in a span of about a year, from 1968 to 1969.

The Espada was Lamborghini’s first true four-seater production car and the first to be offered with an optional automatic transmission. It’s one of the company’s most abundant classic models with 1,226 units built over 10 years. 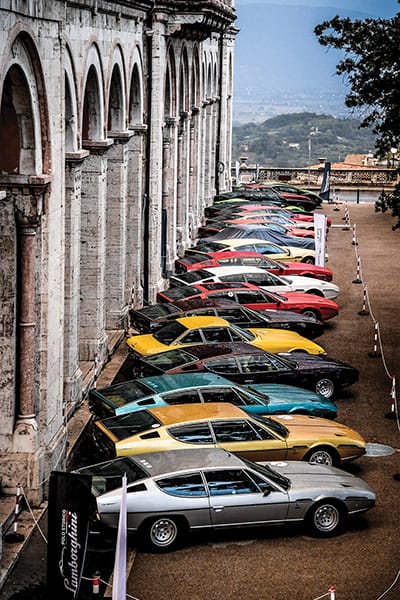 The Islero fascinated me from the moment I first glimpsed its photo in a book. I almost bought one in 2001 but backed off, fearing the cost of operation. Once that car sold, my yearning immediately returned. But it would be another four years before I could identify another for sale.

In the fall of 2005, I found my car at a Florida dealership. A hurricane had just hit the area, leaving it without power. I called the dealer every day to ask when I could come down to see the car from Pennsylvania, where I was living; on my third call he confirmed the power company had promised service for the following day, so I booked a flight and inspected it the next afternoon. After my test drive I left the dealer an offer, and while I ate dinner he called to accept.

The Islero was like no other car I had experienced. It combined elegance and a simple, restrained style with exciting power, and it was so rewarding and exhilarating to drive. Over the next few years I drove it in three 1,000-mile rallies, on many long-distance weekend drives, and on errands whenever I could. Every place I went was an adventure, and onlookers uniformly reacted with enthusiasm. Most were surprised to read the Lamborghini badge. Surely a Lamborghini is a flashy, bright, and flamboyant sports car, is it not?

Hardly. Neither the Espada nor the Islero look like what most envision when they hear the name Lamborghini. Ferruccio Lamborghini, who founded the company, wanted the Islero to be a car that a businessman like himself might buy. It had to be fast, of course, but also comfortable and able to carry luggage for its passengers as it dashed from Milan to Paris or Frankfurt. 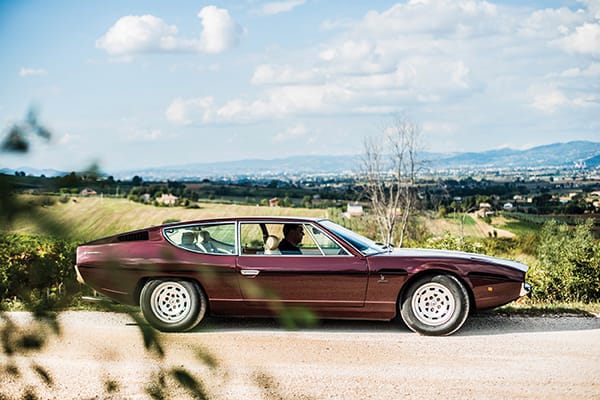 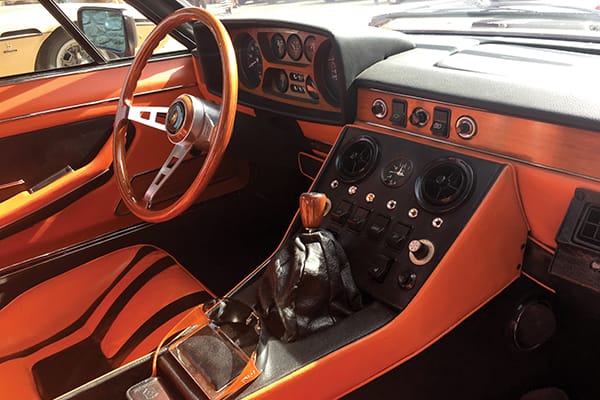 The Espada became a legend for being a four-seat expression of truly rapid transit. Two pairs of full-grown adults could travel in comfort, with room for their belongings under the big rear glass hatch. Both models share the same 4-liter, 325-horsepower V-12 engine with no fewer than six hungry carburetors and a five-speed transmission that delivers enough power to propel them to 155 mph.

Automobili Lamborghini famously emerged on scene after a “spat” between Ferruccio and the redoubtable Enzo Ferrari. An accomplished industrialist, Ferruccio built his empire on tractors he manufactured, at first from surplus military parts, as well as heating and air-conditioning systems. He became a wealthy man, and he owned a number of Ferrari’s cars. Being practical, Ferruccio expected in his Ferrari a level of reliability and ease of operation that matched its performance and price. As the apocryphal story goes, Ferruccio had trouble with the clutch mechanism in his Ferrari. When he complained, Enzo reportedly responded, “Perhaps the problem is not with my cars but with a tractor-driver using one.”

Ferruccio allegedly vowed to build his own car that would show a clean pair of heels to any Ferrari. True or not, he assembled a brilliant young team of engineers, designers, and test drivers and succeeded in bringing to market cars that met his criteria and more.

From the 1963 showing of its first car through 1968, Lamborghini astonished the automotive world with the 350 GT, 400 GT, Miura, Islero, and Espada.

Lamborghini allowed us to drive
two cars from the factory museum collection:
a 1968 islero in stunning Rosso Amaranto
and a 1976 Espada in Blu Notte.

My own Lamborghini idyll lasted but three years. As a collector, something often must leave my garage to make room for the next. I enjoyed the Islero. I used it a great deal and made fantastic memories, but in 2008 it was time to scratch a new itch. I sold the car at auction for what was then a record price for the model.

During the Lamborghini anniversary event, I met 32 people who shared my passion and satisfaction. They came from Switzerland, Germany, the United Kingdom, France, Holland, Sweden, Belgium, Cyprus, and Norway to navigate the roads on which their cars were born to run and to bring them back to the factory where it all began.

Lamborghini also allowed us to drive two cars from the factory museum collection that Polo Storico had restored — a 1968 Islero in stunning rossoamaranto (amaranth red) and a 1976 Espada in blu notte (midnight blue) — as well as a few current offerings: the fire-breathing 740-horsepower Aventador, the “everyday” Huracán sports car, and the latest addition, the Urus SUV.

The most striking similarities are between the Urus SUV and the Espada. Both were designed to comfortably seat four passengers, but you might be able to load more luggage in the Espada than the SUV. 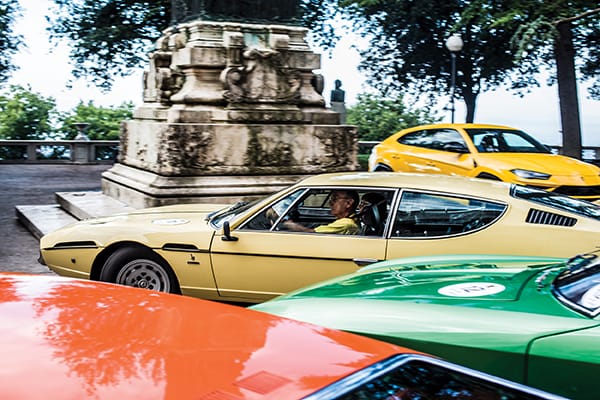 Among the event’s participants, Harald and son Frederik Skjoldt won the prize for longest drive. From their homes in Oslo, Norway, they drove their rare VIP Espada to Perugia, Italy, a round trip of more than 3,700 miles. Of the 1,275 Espadas built, the VIP was one of only a dozen with a special color scheme and interior; in the spirit of the 1970s, orange and black striped leather seats complement bright orange paint. The Skjoldts are Lamborghini mad: They own more than 20 examples of the marque combined, from the earliest 350 GT to a late-model Gallardo. Included in their collection is the sleek two-seat Miura bought new by Frank Sinatra. Also finished in orange, it boasts matching shag carpeting.

Patrice and Anne-Marie Silly from Paris and Lynne and Richard Bull from the U.K. also brought Espadas. The Sillys keep their Lamborghini with their small collection near La Défense. And it’s no garage queen. They drive their champagne Espada  across the country and to dinner in Paris.

The Bulls drove their dark brown Espada from their home in southeast Britain as part of another major celebration (this one topped my 10-year reunion with the Islero): their golden wedding anniversary and Richard’s return to health. Having purchased their Lamborghini in 1977 as a gently used car, they’ve covered substantial mileage while caring for it beautifully. They even had a bespoke wax and interior fragrance created for their car — chocolate, naturally.

We all traveled from different places to celebrate different occasions, but we came together on some of Italy’s fabled roads, sharing a culture-rich driving experience only a privileged few will ever know.