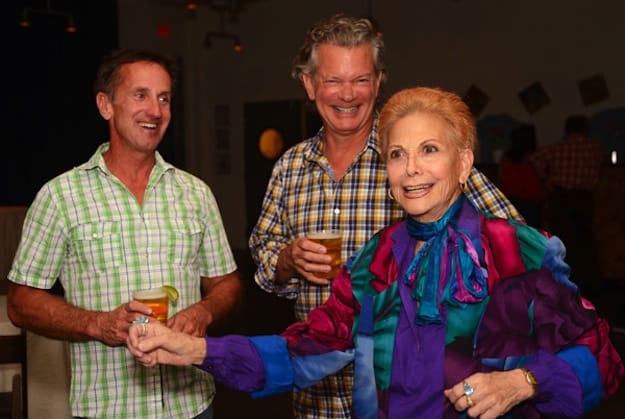 When life deals an unexpected punch,  Linda Gerard is the first person to put up her dukes and punch back.

A well-known entertainer in the desert since the early 1990s, Gerard’s most recent association the last few years have been as the iconic face of Sissy Bingo. The Monday night ritual at Ace Hotel & Swim Club in Palm Springs has developed into much more than just the traditional letter calling, but a platform for Gerard to connect with audiences in a way only she can do.

“What I love about her is her in your face approach, letting you know how she is entertaining, how she is making you feel,” said Bella Da Ball, who runs Trivia Night at the Ace in an adjoining room on Monday nights. “She’s not quiet, she’s not shy. She’s a great asset to the entertainment community, the business community. Just life in general.”

Gerard’s life has taken an unexpected detour after she learned recently that she has lung cancer. True to form, however, Gerard is not about to let the disease keep her down.

She is expected to appear at the screening of “Bingo Night” at this week’s American Documentary Film Festival, which runs April 4-8. “Bingo Night” features an assortment of Bingo hosts, including Gerard, and how they spice up a traditional American game. The film runs at 2:30 p.m. April 7 at the Camelot Theatre, and proceeds from the screening will go directly to Gerard’s health care.

Ace also held a benefit for Gerard, combining a night of music and laughter with a raffle March 25 to give back to the woman who was the understudy to Barbra Streisand in “Funny Girl” in the 1960s at the Winter Garden Theater in New York.

Gerard spent much of the night hugging and chatting with the fans that have come to adore her and “Sissy Bingo”.

“I’m overwhelmed,” Gerard said of the Ace benefit. “People have been contacting me that I haven’t heard from in years. If I wasn’t tired, I would be working tonight.”

The evening was co-hosted by Da Ball and Manny the Movie guy, who reviews films for the NBC affiliate in Palm Springs (KMIR) and on the radio (Mix 100.5FM).

Manny said he has been a loyal fan of Linda’s and welcomed the opportunity to give back to her.

“Linda is one tough cookie with a great big heart,” Manny said. “She has a quick wit, good-natured, and a fighter! I want to grow up to be just like her.

Her fans are counting on Gerard’s indomitable spirit to bring her back soon.

“I refuse to be a victim,” Gerard said. “I’ll beat this. I’m looking forward to getting back to work.”

To purchase a ticket to the screening of "Bingo Night", visit the American Documentary Film Festival website.