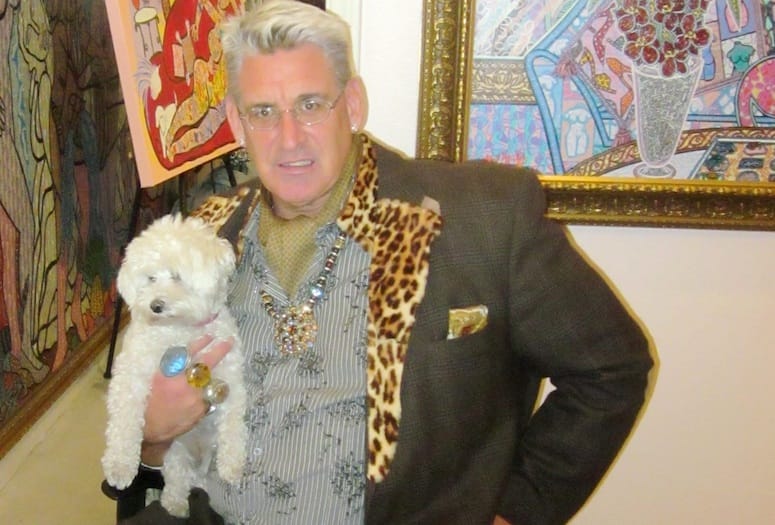 Lon Michels is larger than life.

He stands 6-foot-6, wearing a faux leopard jacket with an ascot in a contrasting pattern. On top, there’s a large jeweled pendant.

“Lon’s been called the ‘Liberace of the Midwest,’” boasts his partner, Todd Olson.

But in 2004, Michels watched the world he commanded begin to fade from view. He was going blind. His eyesight started deteriorating months beforehand, but he denied it.

“I would tell myself that I needed new glasses, or that I was tired,” Michels says. “I didn’t want to face blindness.”

Because of an eye infection, Michels went completely blind for more than a year. Yet, he refused to give up painting.

“It was tragic, but I am more grateful than before,” Michels says.

Now, fully recovered and with full vision, Michels is fulfilling a lifelong dream of opening a gallery that bears his name. The grand opening will be held from 5-9 p.m. Oct. 26, featuring his works and Olson in Palm Springs.

Visual From Beginning to End

Seeing how this prolific artist dresses gives an indication of his detailed artwork.

In one recent painting, a woman friend had posed nude, but later lost her nerve, Michels explains. So he found a way to keep her bare skin without it being obvious.

He added a torso pattern to her skin, which looks like 100 surreal tattoos. Yet, in all of Michels’ paintings, the patterns and colors complement each other to create a cohesive whole.

Michels and Olson travel the world, creating different versions of the same painting. However, Michels has been painting for 40 years, while Olson began a few years ago.

The back room of the gallery is their working studio. On any given day, people can see them painting there. Currently, they are working on different versions of  “The Dream,” a tribute to Henri Rousseau.

Michels often works from live models in four-hour stretches. He prefers not to sketch the image beforehand, but works directly with paint.

VIDEO: Listen to Lon Michels describe his mother's influence on his development as an artist.