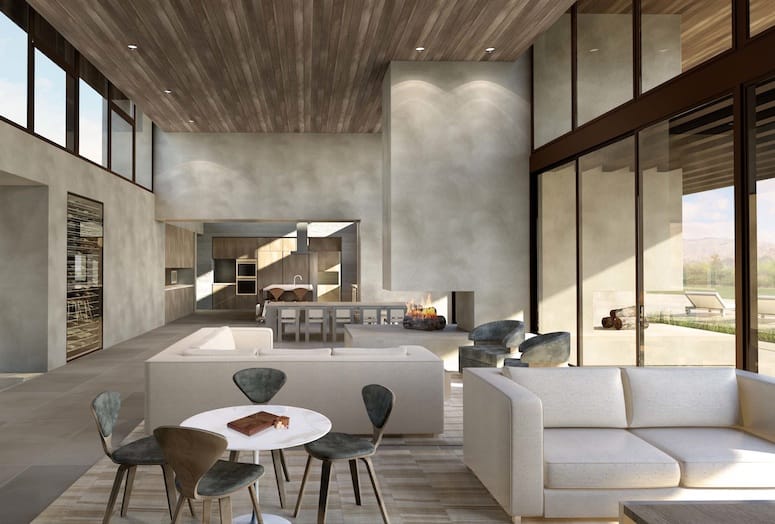 The Great Room of the Ross Residence at the Madison Club in La Quinta shows the full range of what Marmol Radziner can do - from architecture to construction to interiors.
Rendering courtesy of Marmol Radziner

The tandem’s contributions to the Palm Springs preservation landscape are immeasurable when considering their two high profile restoration projects: the 1946 Richard Neutra-designed Kaufmann House in 1998 and the 1961 E. Stewart Williams-designed Architecture and Design Center, Edwards Harris Pavilion in 2014.

Both projects have garnered international acclaim. A third notable restoration project in Palm Springs is the Ship of the Desert House, the 1937 Streamline Moderne house owned by clothing designer Trina Turk and her husband, photographer Jonathan Skow.

Ten years ago, I wrote about Marmol’s prefab Desert House for Palm Springs Life. Located on top of a Desert Hot Springs hillside with panoramic views, Desert House was among one of the first prefab structures his firm built. The Desert House was among one of the first prefab structures built by Marmol Radziner.

“Desert House was our first prefab project we did as an experiment, it was fairly new at the time,” Marmol recalls. “The desert has had a long history of being a great place for experimentation with new ideas. Subsequently we built several prefab homes abroad and around the country.”

But when the economy changed, Marmol Radziner began winding down their prefab business.

“We continue to design prefab homes, we just don’t manufacture them,” says Marmol.

They have plenty of other services to keep them busy. “Because we are a design-build firm, we build our own projects,” he says. “We have our own cabinetmaking shop; we also produce furniture, we design jewelry, and housewares, so it’s really a wide range of disciplines.”

The design-build Los Angeles-based firm covers a wide range of departments, including construction (as general contractors), cabinet manufacturing, and even a metal shop. Their work on the Kaufmann House included landscaping.

“We do landscape design and we do interior design,” Marmol says. “The Kaufmann House is an example of our range – we did the architecture, we did the interiors, we did the landscape; we did the entire project with the owners.”

Marmol Radziner is currently designing two projects in the desert, including a restoration of a home in the Las Palmas neighborhood of Palm Springs. The home commissioned in 1969 by actor Laurence Harvey is a 5,500-square-foot classic example of Conrad Buff and Donald Hensman‘s signature post-and-beam style.

“It’s a beautiful and elegant home, and once again we’re doing the construction, the landscape and the interiors,” Marmol says.

The other Coachella Valley project is the Ross Residence in La Quinta. The project is a one-story residence in the luxury golf community, the Madison Club. Extended over two lots, the home opens up to the west with views of the San Jacinto Mountain range, as well as the club’s golf course.

The Ross Residence in La Quinta opens up to the west with views of the San Jacinto Mountains.

You can practically hear the anticipation from the various preservation/architectural organizations who will want to tour Marmol Radziner’s latest architectural marvels. Architectural tours have spawned a robust tourism niche.

Marmol points out that it’s a very generous homeowner who opens their home to hundreds of people to tour. According to Marmol, homeowners are the unsung heroes.

“I don’t think we pay enough attention to homeowners,” he says. “We often celebrate the architects, but I think homeowners should get more credit for what it takes to restore a home. Not only do they go to the personal expense of restoring their homes, but they often make them available for architectural tours.”

If you want to hear more pearls of architectural wisdom from Marmol, don’t miss his Architecture and Design Council 101 lecture at the Annenberg Theater at 10 a.m. March 28. His lecture is entitled “The Midlife Crisis of Midcentury Modern.”

“As more and more postwar buildings are becoming eligible to be considered historically significant, we find ourselves at a unique and challenging moment in U.S. architectural history,” he explains. “The presentation will focus on the challenging questions of how we can make thoughtful value judgements on the worth of an entire aging body of architecture.”