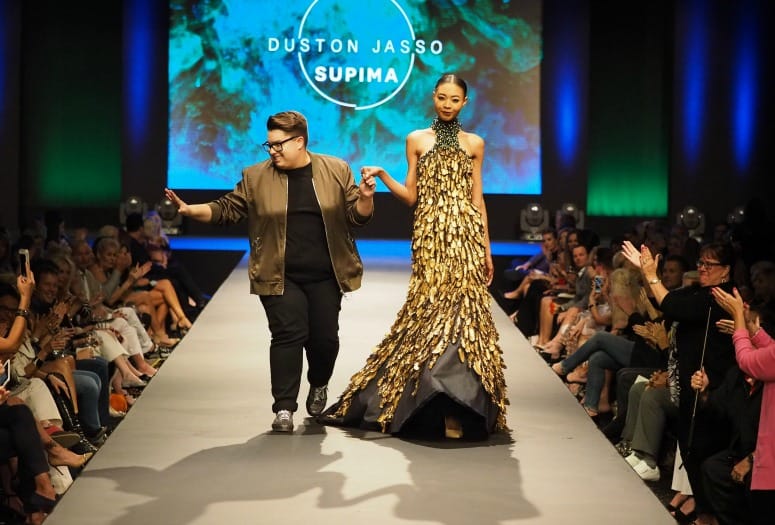 FIDM product Duston Jasso escourts one of his models down the runway, marking his second straight appearance at Fashion Week El Paseo.
PHOTO BY GARY BINDMAN

There is a sensory overload that occurs when seven very different designers flood a runway. Collections blur together amid thumping music and shouted commentary among friends as each model struts along the catwalk. By the time the post-show house lights flicker on and the throngs of voguish ticketholders pour from the tent, heads are spinning. Perhaps it’s the Champagne. Perhaps it’s the Fox & Fiddle sticky toffee pudding. Perhaps it’s the silent auction results. (Who won that BMW Performance Center driving experience, anyway?) Women wobble to the elevator, arm in arm, hands flailing as they try to recall their favorite pieces.

This was the scene following Wednesday night’s FIDM / Fashion Institute of Design & Merchandising runway explosion showcasing everything from ethereal hand-dyed watercolor cape gowns to down-home Americana jeans, tees, and scuffed up combat boots. The clear front-runners of the evening were menswear and all things gold. 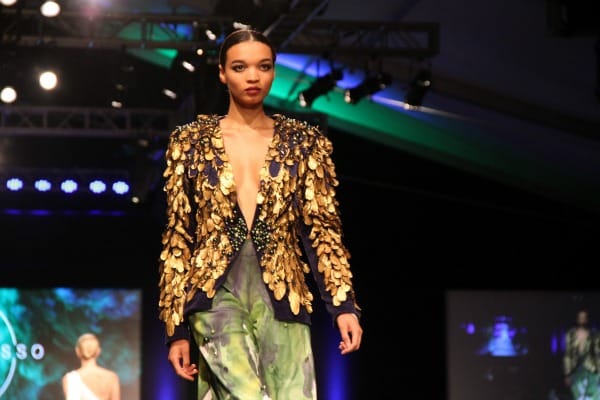 Set to Bruce Springsteen’s “Born in the U.S.A.,” the Ace Rivington collection by Lawrence opened to wild audience approval. The room erupted as men tread by in vintage-feel T-shirts and plaid button-downs, fitted denim, bomber jackets, and sweatshirts. An Ace Rivington–logoed canvas tote bag with a Wright Flyer decal and red striping across the top and bottom appeared twice, an ideal summer carry-all. Thin red piping seemed to make an appearance in all of Lawrence’s looks, tying the casual, blue-collar story together. The designer got his start manufacturing reproduction World War II–era military uniforms in Hollywood and his Fashion Week El Paseo collection gave an emphatic nod to that experience.

A few VIP Fashion Week Divas stood from their seats to perform a mini wave when Groom by Terry-Sims hit the stage — white on white on white tuxedos. The stand-out look paired a crisp jacket with shorts and gartered socks … oh so Palm Springs. Marilyn Gladstein was among the front-row guests to do a little dance as the dudes appeared. “I like to see men dress sexy, masculine, sharp,” Gladstein said. “We need more of that at Fashion Week.” Terry-Sims’ female models wore white tux-inspired jumpsuits that were fittingly sexed up — one with a plunging deep lapeled V-neck and one with a suspendered open back. 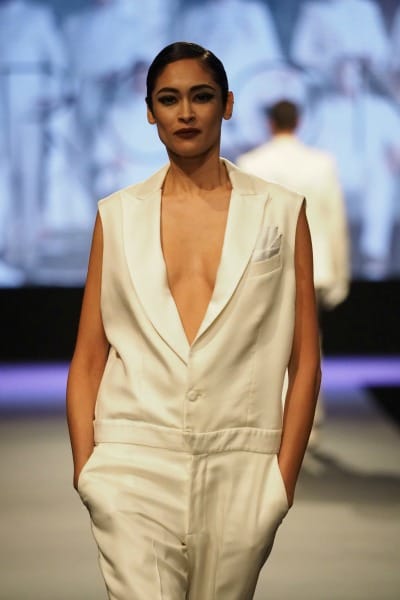 PHOTOS BY GARY BINDMAN
Most of Octavius’ designs are meant for men, but he showed this sexy,plunging deep lapeled V-neck jumpsuit for women, too. 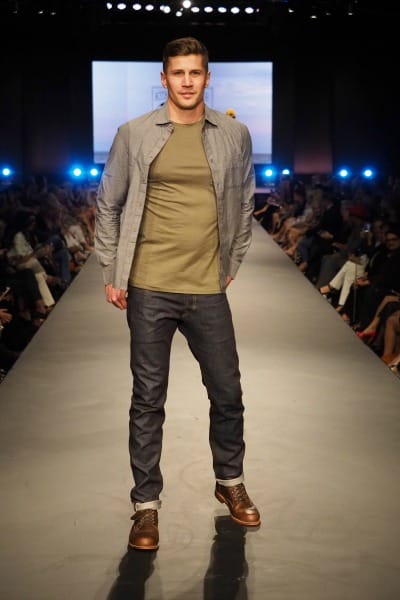 The Ace Rivington collection was chalk full of quality vintage-feel.

Duston Jasso enchanted with The Aureate, which opened the FIDM show. Supple hand–dyed and beaded fabrics swam beneath the spotlight. Oceanic watercolor prints in hues of azure and emerald evolved across the collection of gowns and palazzo pants with Jasso’s exponential addition of dazzling handmade gold feathers. As the metallics increased, so too did the crowd’s roar. Jasso’s finale stole the show: a high-neck, racer-back mermaid gown in black fabric, completely covered in his gilded, leaf-like ornamentation down to a jagged pattern at the bottom hem. From afar, the detailing gave the impression the dress was coated in crackled gold leaf. “The collection was featured in a special exhibition in Paris,” the announcer said as Jasso walked the runway, waving at his newly won fans. 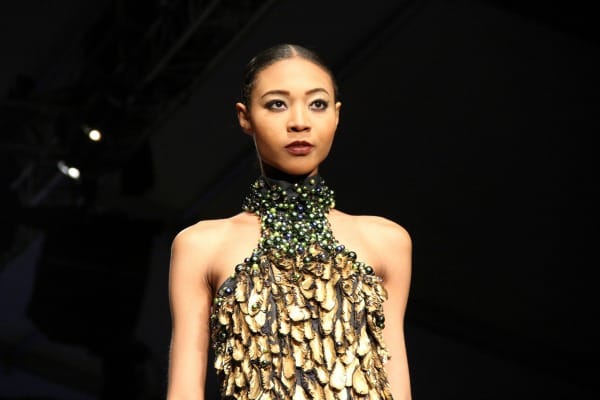 PHOTO BY ERIN PETERS
Duston Jasso’s finale stole the show: a high-neck, racer-back mermaid gown in black fabric, completely covered in his gilded, leaf-like ornamentation down to a jagged pattern at the bottom hem.

The glitz amplified in Joe Vilaiwan’s namesake Vilaiwan Fine Jewelry collection, featuring massive art-piece necklaces that had each guest leaning forward in their chair as Rihanna’s “Desperado” bellowed from the speakers. Designs included a cascading sapphire and coral oversize floral necklace with matching blossom earrings; a gold shieldlike piece extending down to a navel-height spike; and a geometric honeycomb of gems. The snaking jewels may not be practical for everyday wear unless you actually are Rihanna, but they were breathtaking to behold. “The jewelry was beautiful,” said El Paseo Jewelers owner Raju Mehta, whose company is this year’s sponsor of Fashion Week El Paseo. “I don’t know how comfortable they are, but it looks pretty bold.” Vilaiwan previously collaborated with Disney Consumer Products to create a line of couture jewelry for the film Oz the Great and Powerful. 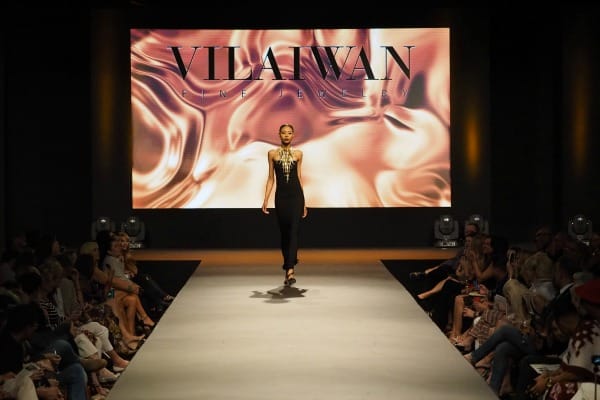 Mehta also praised the evening’s final collection, Dodo-Dez by Mohamed Salaheldin. Tiny diamond-pattern beads transitioned from cool tones to warm, blue to red. Sheer organza gave way to heavier velvet. Geometric patterns metamorphosed into birds of paradise shapes. The first bird of paradise flower made a graphic statement as the sole embellishment on a slinky velvet maxi dress with an almost unseemly center-front slit. “I have been here every day and I watch every show,” Mehta said. “I think [Salaheldin’s] clothes were the best combination. They are just beautiful and colorful; he has done a great job.” On trend with earlier shows this week, Salaheldin ended his collection with an unexpected white princess wedding gown that seemed at odds with the rest of his story. 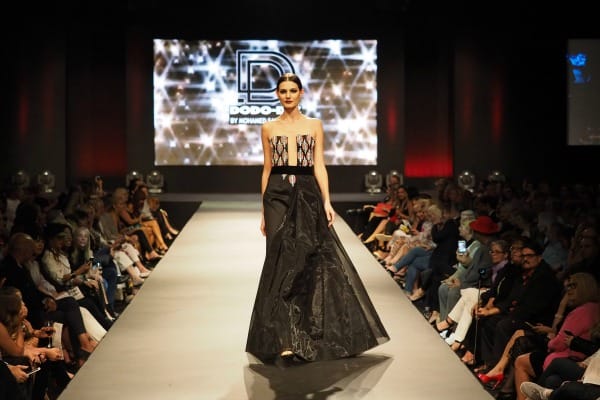 PHOTO BY GARY BINDMAN
Mohamed Salaheldin returned with a preview of his Fall 2017 collection.

Jenna Piantedosi presented J Dosi, the second collection of the night. Fitted black pants, skirts, and blouses mingled with peek-a-boos of navy and white, in pairings reminiscent of a flight attendant’s uniform. Piantedosi also showed a range of little black dresses with mesh inlays. She played up the glamour by adding gold zippers up the back and a smattering of fur.

The ambient electronic “Alice” by Pogo perfectly set the tone for Leetal Platt’s Rainbow Glitch. A nod to Alice in Wonderland, Platt’s collection appeared sixth in the evening show and began with a sleeveless, gray plaid jumpsuit with white lace paneling. White lace accented most of Platt’s looks, as did moments of anchoring black. It’s clear Platt has a thing for arms; her balloon sleeves were distinctive among other collections on the runway. One layered ensemble’s sleeves bunched at the wrists and descended to the floor, dragging behind the model as she sashayed toward the crowd of photographers at the end of the runway. 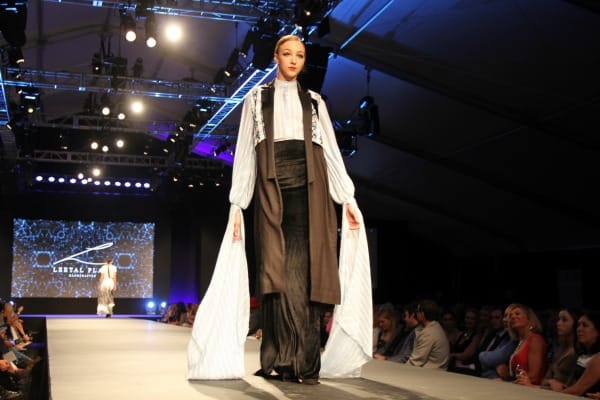 PHOTO BY ERIN PETERS
One of Leetal Platt’s ensembles had sleeves that bunched at the wrists and descended to the floor.

These seven designers, all graduates of FIDM, heated up an otherwise blustery evening in Palm Desert. It’s midweek of Fashion Week El Paseo 2017 and the collections are only getting hotter.

Fashion Week El Paseo’s FIDM night was presented by John and Victoria Hill, scholarship providers to fashion students who will go on to appear at future incarnations of Fashion Week El Paseo. The announcement of this year’s scholarship winner, Nancy Elizabeth Hennessey, followed the show. The winner walked out to wave at attendees with one of her designs, reminiscent of an evil storybook queen — a sheer black dress with an elegantly menacing cape and a towering feather neckpiece.

The evening benefited the Junior League of Palm Springs Desert Communities and ticketholders enjoyed an after-party at The Venue Sushi Bar & Sake Lounge.