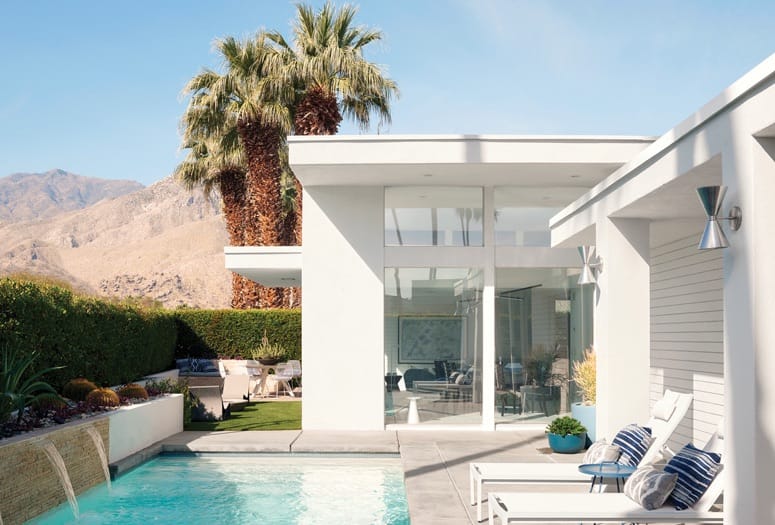 Walters worked with Bob Allred of Juniper House on the home’s outdoor furnishings. As Allred lives around the corner, the client simply walked over to see samples in his backyard.
PHOTOGRAPHS BY JOSH GRUBBS

Coast to coast, when someone gets stuck with a home-related problem, Michael Walters is accustomed to fielding the call — or, more recently, a direct message through Instagram. From shelter-mag graphic designer to stylist and art director for home retailers to home stager to interior designer, Walters has always relished a “let’s improve this” challenge. His good taste transfers to strong solutions and visual environments that are approachable yet intriguing.

Three years ago, Walters landed in Palm Springs full time after owning a vacation home here for 10 years with his partner. His experience in New York City and Northern California influences his casual-chic  sensibility, whether staging homes for sale, styling photo shoots, or designing interiors. (He practices all three.) Walters answered his latest calling — to design a three-bedroom residence in the Kings Point neighborhood  — through a referral.

“What’s so appealing about the desert is that there’s this generosity, an understanding that in order to make this work, we have to make it work together,” he observes. “We’re not at critical mass yet, so the only way we’re going to get to shore is to row in the same direction. We were seeing so much energy in the valley, so much entrepreneurial spirit, and so many things starting to happen that, even though we knew we wanted to retire here, we wanted to jump in sooner and be part of it now.”

We spoke with Walters about building custom storage, curating art, and working with a modern-minimalist client as a designer who favors less strictly modern environments.

When people ask you what you do, what’s the short answer?

I’ve actually begun to say “designer,” or “designer and stylist,” and that’s very, very recent. I must say I felt a little sheepish about it for the longest time. I feel confident in my abilities as a stylist; I’ve been doing it since 2001. But the “designer” part grew out of moving to Palm Springs. My partner and I did some staging for a client who wanted us to design a house, so the staging business became a design business.

What’s the connection there?

Our niche is driven by my background in styling, where you’re given 50 percent of the merchandise and you’re asked to fill in the gaps to tell a story. So a good niche for us, or one of them, is when people are just coming to the desert. Especially with second homes, they’re bringing things with them that financially will make the transition a little easier until they can do something else. And I can work with that.

That’s what happened with this home?

Exactly. My client got in touch with designer Mark Nichols and said, “I love your work, but I already have my art and some furniture.” Mark likes to do a ground-up project — and he’s very good at it. I knew him from some photo shoots, and he said to the owner, “I have the perfect guy for you.” 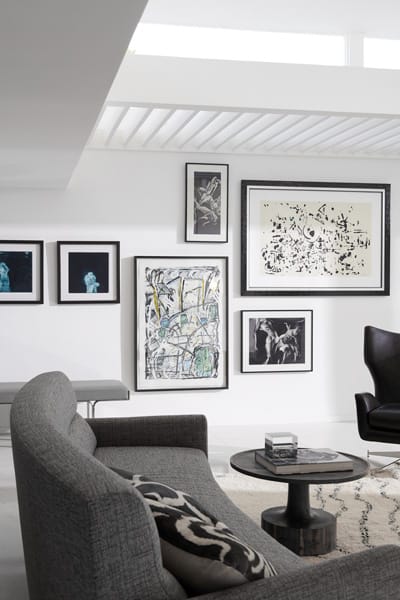 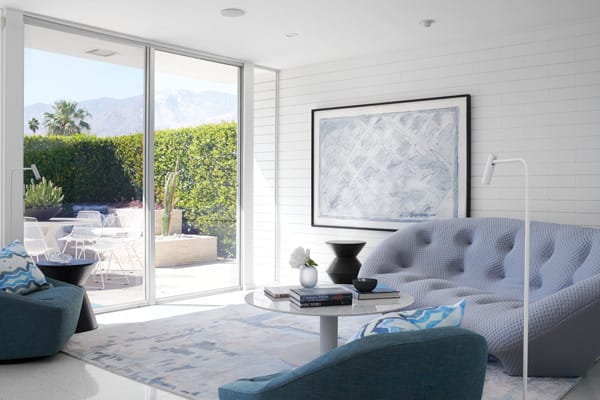 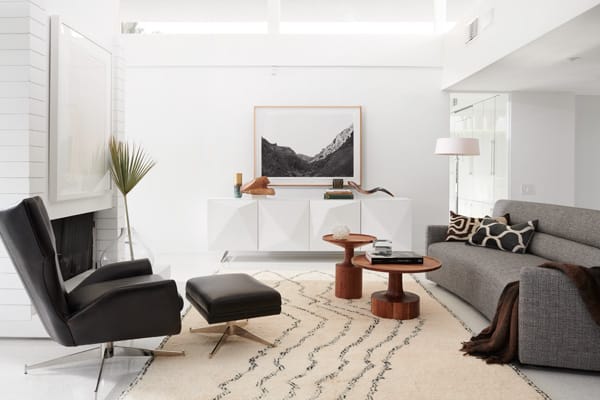 The living area’s curved Crate & Barrel sofa paired with a rug from Pure Atlas echoes the clients’ existing Ploum sofa in the lounge. Wood nesting tables from Pelago and a marble table from Modloft work as sculpture.

How did you know it would be a good fit?

Because I love the house. The previous owner had done 85 percent of the renovation and he had done a really nice job. So our focus was on furnishings and landscape.

What was the starting point?

The client and his husband, who live for now in Boston, purchased it last summer. He loved the “clean white box,” and our mission was to keep the overall design as minimal and graphic as possible. They had a number of modern furniture pieces that they had always imagined in Palm Springs, so the goal was to flesh out and unify those pieces. Then we brought in others from a variety of local and national sources: Modloft, One Kings Lane, Crate & Barrel, and Design Within Reach.

How did you make him happy?

The biggest interior goal of all was to place the furniture in the context of all the glass — to make sure the interiors and exteriors were linked so the sightlines continued. We repeated the colors and shapes of the master-bedroom ottomans in the planters just outside, for instance.

They are not big houses. They live big and look big, but the square footage isn’t that much. We wanted to create air and honor the architecture. That said, they are both voracious readers and collectors, so those collections had to be resolved. Since the Kings Point homes were designed by William Krisel, I researched storage and bookcase ideas he may have employed. The resulting master-bedroom built-in was based on that research, plus a dash of my own problem-solving — a grid of open shelving punctuated by simple closed cabinets that provide opportunity for display and access while keeping clutter at bay.

How did the art factor into the design?

These arts patrons had a collection of paintings they wanted to showcase in this white, gallery-style house. They gave me free rein on selecting and grouping pieces to create a dialog with the views and architecture. We reframed several in simple black or white to further that relationship. Ironically, given the collection, the client wanted to make sure we left many of the walls blank to show off the lines of the house as well as let the sculptural furniture hold court. I suggested that we leave all the slumpstone walls bare to act as a texture and let the house speak. We only broke that rule once: in the lounge, where the juxtaposition with the views was too good to resist. For the gallery wall in the living room, I chose the art from the pieces he was thinking about based on how they might mix together, what I could do with them, and their size. I wanted to add a little photography too, which creates a more dynamic collection.

It wasn’t hard to work remotely?

He sent me photos via Dropbox of everything he was thinking of sending out. I started to place them on an art and a furniture plan. We did a lot back and forth by email to have a written trail. We have very engaged clients. They love helping pick things out. Every lamp is a conversation. I usually set up a Pinterest board for every room, and we both pin to it. Everyone we’ve worked with wants to be involved. 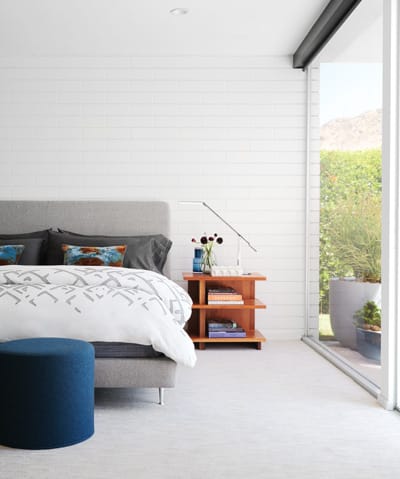 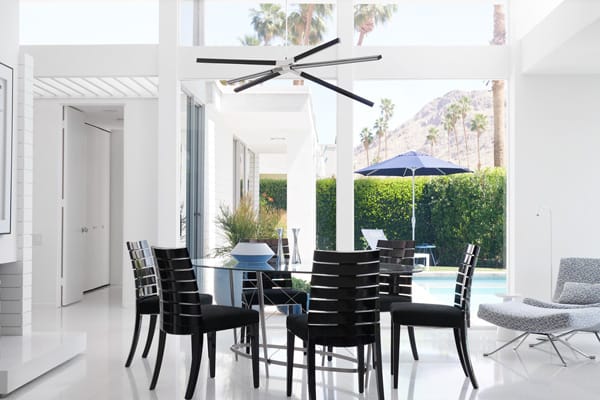 A Sky Bang chandelier by Stickbulb was a statement addition to the tallest space in the house. The arms create a mobile effect.

What if they get it wrong?

You want people to have a lot of input, but it’s a fine line. It is what you do for a living, and you want to help keep them from making a mistake. This client loves blue, and every time I kept steering away from it as a break, or to make it stand out, we kept coming back to it. I’m still learning how much to insist on something or to let it go because they are the one living in the house. People like what they like. My house works for me, and I have to give everybody that leeway.

Does the project represent your style?

The client has very modern taste, much more modern than my own — cool and contemporary. He likes every surface to shine. The thing is, none of our projects are alike. You’re probably not going to come to us for a “look” but because you need a solution. So yes, in that way it does. I never wanted to do that sort of atomic look; I have a respect for it, and I understand that when people spend time here they want to immerse themselves in the fantasy of midcentury. But I feel like there is an appetite for things that don’t look like a Mies Van der Rohe knockoff white vinyl sofa.

Williams-Sonoma, Pottery Barn, and Target have been longtime clients. I wanted to take that comfortable look and apply it to the desert. And people have responded to it, if only because it’s different. We just staged a house in Las Palmas that way, and it’s getting a lot of good feedback. The agents were thrilled, and people have asked about buying it furnished.

You and your partner consider yourselves “outfitters.” What does that mean?

When people are moving, they need a lot of things they aren’t even thinking about: a gardener, cable, an AV person, window tinting — and I’m not putting that art on the wall until we tint those windows. [As the designer] you end up coordinating those services. When this client wanted to enclose the garage, we led him to Duane Smith at Hundred Mile House. We’re not architects or builders, and we don’t want to be mistaken for them. We turned that over to Duane. And when the client comes to visit, we make sure there’s a fresh orchid because he loves them. My partner, Lee [Bottorff], is now the house manager for a couple of the properties we designed. We have an ongoing relationship with almost every project we work on.

In the end, what differentiates staging and designing?

In staging, it only has to look good for three months; it doesn’t have to stand the test of time. As a designer, you try to help people make choices they don’t have to make again in three years. I’ve talked a lot of people out of brass. Personally, I love it, and it’s warm. We just used some on a project. But my fear is doing something that you’ll want to redo in three years. I would like to be the person who can give you something that feels fresh and brand new to you and at the same time will let you live with it for a long time.