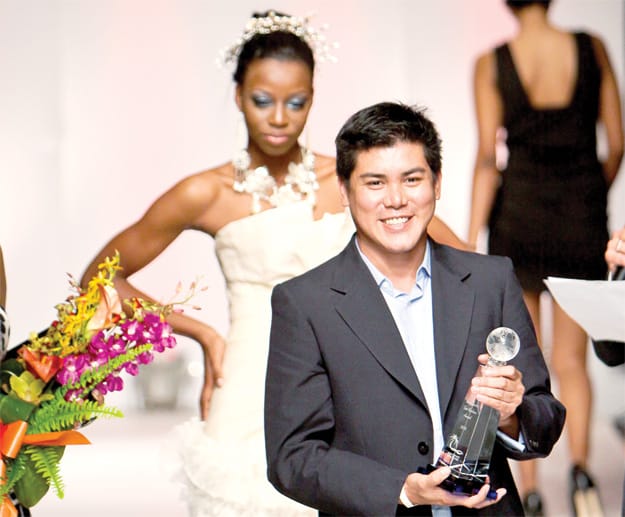 While fashion designers typically work with satin and shantung, cashmere and cotton, linen and lace, Oliver Tolentino draws from the indigenous materials of his native Philippines: fibers derived from pineapples (piña), abaca, and raw silk cocoon. These eco-friendly fashions have brought the 39-year-old couturier well-deserved attention.

“I want to show how elegant ‘green’ can be,” he says. “Piña is naturally off-white with an organza texture. It creates vintage-looking gowns, but also can be dyed vibrant colors.”

Tolentino’s piña gowns have been featured at LA Fashion Week; at Oscar and Peabody award ceremonies; and in style-conscious Geneva, Milan, Singapore, and Hong Kong. In 2008, he won first prize at Bali Fashion Week with an outfit made of Philippine Capiz shells. Hong Kong’s Green2Greener charity used a Tolentino piña gown as the finale of its 2010 EcoChic show at the United Nations headquarters in Geneva. Hong Kong Tatler magazine, which promotes “the Spirit of High Society,” featured the gown in its July issue.

Chosen one of nine finalists in the Academy of Motion Picture Arts & Sciences’ 2010 Oscar Design Challenge, Tolentino created a gown whose bodice featured asymmetrical, layered strips of piña accented with Philippine freshwater pearls along the neckline. Pearls also lined the plunging back and extended in a swirl around the waist. Hand-cut rosettes made from piña and abaca fibers covered the skirt. Although another designer won the competition, Crazy Heart producer Judy Cairo wore a Tolentino design to the Oscar ceremonies. He dressed four attendees to the Golden Globe Awards in January. Niecy Nash, Macy Gray, Vivica Fox, Patti Austin, Lea Salonga, and other celebrities have graced many events in Tolentino creations.

Born in the small town of Orani in the province of Bataan, Tolentino began his career in the 1990s in Manila and became one of Imelda Marcos’ favorite designers. In fact, the former First Lady of the Philippines asked Tolentino to create a gown for her 80th birthday gala.

As his international renown grew, Tolentino opened a Melrose Avenue boutique in West Hollywood in 2009 and was soon invited by Downtown Los Angeles Fashion Week to preview a spring-summer 2010 collection at the Geffen Contemporary at MOCA. After that October show, the As Seen in Hollywood website said his 40-piece collection “tickled everyone’s fancy. It was simply magical to have been able to preview the new, the brilliant, and the up-and-coming couture line.”

In November, Tolentino became the first Filipino designer to show his collection at Islands of the World Fashion Week at the British Colonial Hilton Hotel in Nassau, Bahamas.

As 2011 Designer of the Week at Fashion Week El Paseo, he brings couture with a Filipino flair to the desert.

“I love playing with colors and flowy fabrics like chiffon,” Tolentino says. “My design philosophy is bringing colors and prints and the labor-intensive finishings of the East to the timeless elegance of silhouettes from the West. I love playing with prints and manipulating fabrics that you initially would think won’t work but ultimately come together in beautiful creations.”