midcentury| New Layout Pulls Home Out Of Past, Into Bright Future 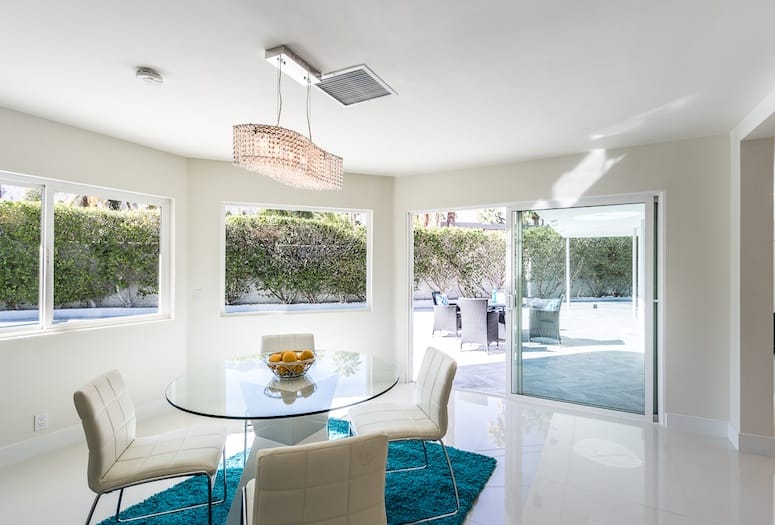 Drew Chance, owner of Islanders Properties, LLC based in Coronado, California, is no stranger to renovation. He’s been investing in real estate since 2009 and during his career he’s purchased and updated more than 100 properties, mostly in San Diego County but also in nearby Orange, LA, Riverside, and San Bernardino counties, as well in the Phoenix area.

So while this 1950s, 2,300-square-foot, three bedroom/three bathroom home in the Deepwell Estates neighborhood of Palm Springs was dark and dated, Chance was sure its classic midcentury vibe could be rejuvenated.

To help with some of the special material selections he reached out to a number of people for advice including Steve Charette of Charette Design, a firm that was founded in 1987 in San Diego with projects that focused on corporate, medical, and government facilities, as well as residential.

A three-panel front door with modern hardware is a welcome change from the previous wood door.

After relocating to Palm Springs in 1997, Charette became involved in the interior design of model homes and custom residential interiors.

“Steve was a huge asset to the design of the home,” says Chance. “He helped from the beginning with the floor plan, which started out as a mess, then helped the whole project along with material choices and advice. He really has a great understanding of Palm Springs style and had great ideas for giving us a modern, but still classic midcentury modern.”

Chance also sought assistance from two local realtors James Bianco and Jeremy Avriette of Gilbert Avriette. “They were at the home almost everyday and helped with construction management and design and have now listed the property.”

The kitchen now has European-style cabinets, a Bianco Cloud quartz on the waterfall island, stainless steel Samsung appliances, and a Moen faucet.

The complete overhaul of the home took about six months. “[Drew’s] main request was to revise the space/floor plan to become more attractive to potential buyers,” says Charette. “The existing floor plan was disjointed and not practical.”

As with many renovations, budget concerns arose but in the end Chance notes that, “We really got a lot of work done for the amount of money that we spent. We got the most out of every tradesperson we could, found bargains along the way, and Steve found us great deals on materials. But going through the project had me sweating a little, [although] maybe that was the Palm Springs summer!”

The painted fireplace in the living room was sandblasted to restore the natural look of its original midcentury stone. New finishes include the polished 24-inch square, polished white porcelain tiles, the panoramic doors, and recessed LED lighting.

Chance thinks one of the best updates is the panoramic doors that separate the living room from the patio/pool area. “One of my favorite features about the house when we bought it was the floor to ceiling windows that were existing,” he says. “The problem was they were original 1950s windows, single paned, and only opened up to about 10 feet wide.”

Now, panoramic doors slide down a track and pivot out creating a 15-foot-wide opening. “This gives the feeling of an indoor/outdoor effect, which everyone in Palm Springs wants about eight months a year, while also creating a tremendous space for large gatherings,” adds Chance. “We had a party with around 100 people [and] no one felt cramped at all.”

In the master bathroom, an old-fashioned step-down bathtub was removed and replaced with a large walk-in shower with a seamless glass shower wall. The floating vanity has Arctic White quartz countertops.

An adjoining room was opened up to create a large master bedroom closet that features built-in cabinetry and a modern-style barn door.