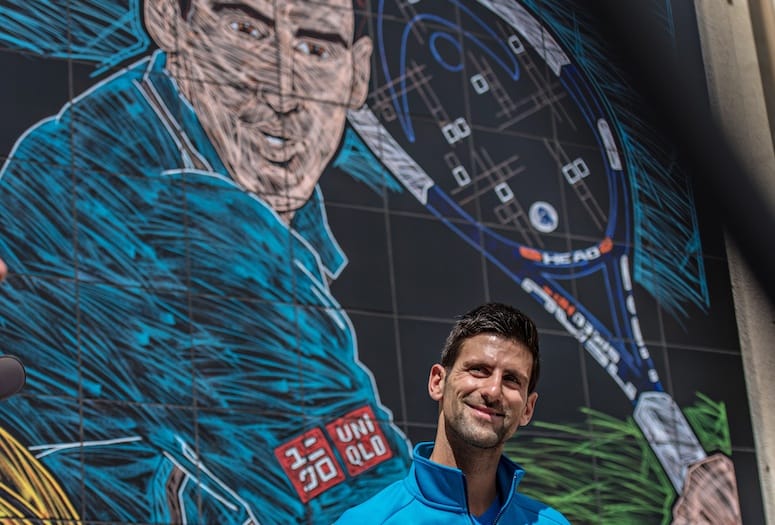 He is the best in the game right now, No. 1 in men’s tennis, a ranking earned, not bestowed, which perhaps is the reason Novak Djokovic seems less intimidated by the position — you know the adage, nowhere to go but down — than invigorated by it.

“My thinking, my approach,” he said in response to a question of what should we expect, “is not that I have to win this, I’m supposed to win this, but I’m going to believe in myself, and I carry the confidence that has brought me to where I am at this moment.”

He meant figuratively to the top of a sport played everywhere from Azerbaijan to Zambia. He also could have meant literally to the California desert, where for a fifth time he will try to win the BNP Paribas Open at Indian Wells.

Djokovic has a puckish sense of humor. Before becoming a champion, he was an entertainer, with mime routines that satirized the physical tics of other tennis stars from Maria Sharapova to Rafael Nadal.

But Djokovic, 28, also is a man with a mature point of view.

“I try to be respectful of my colleagues of the sport,” he said, “and of the fact in this tournament [that] over 90 players are fighting for the trophy.” No boasting then, no over-the-top predictions. Just very impressive production.

In 2015, a great deal was made of Serena Williams, who’s also in the BNP Paribas Open this year, going for the true Grand Slam; that is, winning all four majors in a single calendar year. That attention was not undeserved.

And already this year, the guy nicknamed the Joker has taken the first Grand Slam event, the Australian Open. Yes, he can play. He also can communicate. English might not be his primary language — for a Serb, that would be Serbo-Croatian — but Djokovic not only speaks nearly flawless English, he has a beautiful vocabulary. Fans seek an autograph from Novak Djokovic after the mural dedication.

Tuesday evening, Djokovic, a basketball fan, attended the Lakers-Magic game at Staples Center in downtown Los Angeles. Then it was on to Indian Wells, where, obviously, he likes the courts and conditions along with the amenities.

“The ball bounces high,” he said. “I grew up on clay with a high bounce. I feel comfortable playing on these courts.”

He also likes the overall off-the-court feeling, the high standard of quality, the increasing attendance each year. “These fans are truly great. You can see how much they love tennis.”

“The whole package really makes you feel happy,” he said.

The whole package. That’s a perfect description for Novak Djokovic, the best in game.