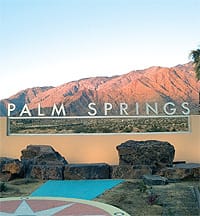 Palm Springs has enjoyed another year reaping the benefits of its creative residents, visitors, and business people.

In his book The Rise of the Creative Class, noted economist Richard Florida stresses how both individuals and communities thrive on creative energy — “from engineering to theater, biotech to education, architecture to small business.” The power of these endeavors remains unmistakable in Palm Springs.

Palm Springs has always offered residents and visitors a remarkable variety of lifestyle options. The city draws upon both innovation and tradition to meet the diverse needs of its citizens and businesses. Palm Springs’ economic development focus is on sustaining an environment in which commerce, individuals, families, and organizations can all thrive as parts of a coherent system. Though Palm Springs is rooted in rich history, it always aspires toward the newest, smartest, most comfortable, and meaningful ways of living. With the incredible array of community assets at its disposal — human, cultural, governmental, and economic — Palm Springs has an unlimited potential for smart growth.

“We are sensitive to the downturn in the economy, especially as it relates to housing, but Palm Springs has always had balanced development — not only during the boom years, but now as well,” says John Raymond, director of community and economic development for the city. While Palm Springs broke records for building permits issued from 2003 to 2007, it wasn’t just residential units. “The completion of two major shopping centers in 2008 has added more than a half-million square feet of retail space and not only brings in new tax revenue to the city, but will give our residents shopping options closer to home,” says Raymond.

The new shopping centers — The Springs at Gene Autry Trail and Ramon Road and Smoke Tree Commons at East Palm Canyon Drive and Barona Road — are examples of how the city is meeting one of its economic development goals to attract new business and add jobs for its residents. The Springs opened in April 2008 with anchor The Home Depot, followed in June by Smoke Tree Commons and its early anchors Cost Plus World Market, Michael’s, and Petco, followed in September by Jensen’s Finest Foods. But it doesn’t stop there. Among the city’s most significant projects this year is the planned development of the College of the Desert — Western Coachella Valley Campus. When built, this state-of-the-art campus on 142 acres will offer tremendous opportunities for students, businesses, and staff.

“The City of Palm Springs, the City Council, our business community, and our citizens are totally committed to the new college campus; and we are in a position to provide immediate and long-term support to ensure the college’s development, growth, and success,” says Palm Springs Mayor Steve Pougnet. “Increases in the college graduation rate directly translate into increased income throughout the region, which helps ensure the continued quality of life for all our residents.”

The college’s western campus will provide more than a convenient new location. While the college prepares students for transfer to larger institutions and offers associate degrees, occupational certificates, and vocational and technical programs, it further intends to tap into the tremendous creative energy that flows through the Palm Springs community. “In addition to being a laboratory of sustainable campus design and best practices, the Western Coachella Valley Campus will recognize opportunities to form partnerships with leaders in employment sectors, including renewable energy, film and television, and hospitality, in addition to preparing students in basic general education skills,” Pougnet says.

While the planned college campus promises to invigorate the area with academic energy, a major makeover of downtown Palm Springs will revitalize the city in countless economic and cultural ways. Proposed mixed-use projects in downtown will create the urban feel with retail, entertainment, office, and residential space planned for the area.

Hotel and resort amenities represent an essential aspect of both Palm Springs’ glamorous past and present transformation. Recently renovated facilities include the storied Riviera Resort & Spa, which first debuted in 1959, immediately becoming an alluring gathering place for legendary Hollywood visitors and celebrities. Nearing its 50th anniversary, the Riviera has undergone a $70 million renovation that preserves the hotel’s original ambiance while presenting visitors with 406 brand new rooms and a host of contemporary amenities.

“It’s really an exciting, exhilarating time,” says Riviera Resort & Spa General Manager Brett Schoenfield. “When we take down the green fence that’s been sheltering the work, people are not going to be prepared for what they will see. It really is amazing, like nothing else in the valley.”

On the other end of Palm Springs, the former Ramada Inn at Sunrise Way and East Palm Canyon Drive has been converted to a 200-room Holiday Inn, reopening in early 2008. Designed by Palm Springs architect James Cioffi , the renewed hotel emerged with stunning midcentury modern influence near the commercially revitalized and expanded Smoke Tree Commons.

"It’s been such a wonderful collateral project," says Barbara Lyons, assistant to the general manager at the new Holiday Inn Center City. “If you want to know who you are and what you’re all about, go through a major renovation.”

Nearby, the Ace Hotel, formerly the Howard Johnson Inn, is being renovated to serve “urban nomads seeking a fusion of European pensione and minimalist luxury,” according to the hotel’s literature. The property promises to cater to young hipsters seeking the classic Palm Springs midcentury experience — the sun, a lounge chair, and a cold martini. In the heart of downtown, Hyatt Regency Suites is finalizing plans of its $20 million property upgrade, which will include updated rooms and new common areas and amenities. Next door, the owners of Palm Mountain Resort recently received approval of their plan to add 40 rooms and renovate the resort’s grounds and facilities. Meanwhile, the nearby Colony Palms Hotel, which reopened in spring 2007, created a tremendous buzz with its rich history and eclectic ambiance. Built in 1936, the 56-room hotel and gourmet restaurant features Spanish colonial architecture fused with state-of-the art amenities like wireless Internet and flat-screen TVs.

Other renovations are just as significant, including the proposed renovation of Wyndham Palm Springs and rebranding of the hotel in early 2010 as a Marriott Renaissance. When the city completed the expansion and upgrade of the Palm Springs Convention Center, the response from meeting planners was extremely positive. The next item on their list, though, was the quantity and quality of hotel rooms in the community. By 2011, Palm Springs is anticipated to have benefited from nearly $200 million in hotel renovations, plus seen the construction of about 1,000 new hotel rooms.

New hotel projects are generating at least as much excitement as the renovations. The famed Hard Rock Hotel, breaking ground near the convention center, will feature two signature restaurants, a luxurious spa, an exclusive nightclub, 32,000 square feet of meeting and convention space, and nearly 500 rooms. The hotel will add a glamorous, cool vibe to the heart of downtown Palm Springs and will accentuate the recent development and renovation of the convention center. The same developers are proposing a second project nearby that would add a Hyatt Place hotel and a Marriott Residence Inn, both within walking distance of the convention center.

The super-luxe Mondrian Hotel, perched on a property at Amado Road and Avenida Caballeros, should similarly complement the dazzling convention center. Expected to open in 2010, the Mondrian will include 200 guest rooms, a signature restaurant, meeting space, a recording studio, a filmscreening room, a luxurious spa, and other high-end amenities.

Palm Springs’ continuing economic success is certainly derived in part from a flourishing relationship between the Agua Caliente Band of Cahuilla Indians, city officials, and the local citizenry. According to Todd Hooks, the tribe’s economic development director, the symbiotic relationship began years ago.

“Beyond the adjectives and superlatives,” Hooks says, “it comes down to a decision by both the city and the tribe to make this thing work. The Tribal Council, the City Council, and tribal executives all understand the policies and culture here. They work closely together and collaborate. We’ve long since moved past the position of ‘yours and mine’; now we think of the success of the city as ‘ours.’”

Hooks says that the tribe’s present efforts — like the ambitious redevelopment of its Spa Resort & Casino in downtown into a 400-room hotel, as well as the planned Agua Caliente Cultural Museum and the opening of new tribal administrative offices — reflect “continuing interest, focus, and support of the city and its land.

“This is our heartland,” he adds. “It’s the lifeblood of our tribe and the center of our world.”

The tribe’s commitment to a prudent, sustainable, mutually beneficial economic and cultural environment helps enrich the lives of everyone who visits Palm Springs and the Coachella Valley.

“Palm Springs is the traditional ‘city center’ of the Coachella Valley,” Hooks says. “When people come to the desert, they talk about coming to Palm Springs, and that speaks to the modern relationship between the tribe and the city. It speaks for our recognition of the importance of Palm Springs’ local merchants, tourism, and the entire community.”

The tribe’s commitment to the city goes beyond policymaking and publicity. The tribe is a steward of more than 31,500 acres of traditional tribal land in the valley. While they take pride in maintaining their culture and heritage, they support and develop Palm Springs in numerous ways. They employ thousands of residents, thus providing for individuals and families throughout the valley. They draw countless tourists to the valley throughout the year. And the tribe has donated millions of dollars to valley charities and civic groups that enhance the lives of everyone in the desert.

Palm Springs prospers because of the creative and collaborative efforts of its community members, and the benefits of this prosperity reach beyond city boundaries to enrich the life of the region, the state, and the nation.