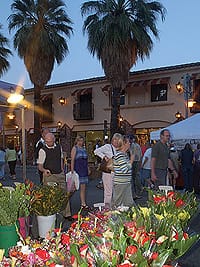 Palm Springs — the Coachella Valley’s most famous and breathtaking resort playground — is experiencing a tremendous renaissance!

Consistently voted the Coachella Valley’s most popular tourism attraction, the festival — founded 21 years ago by then Palm Springs Mayor Sonny Bono — draws in thousands of visitors every January and features a star-studded awards gala, which, as a precursor to the Academy Awards, honors some of the best actors, writers, and directors in the world — including Clint Eastwood, Sean Penn, Brad Pitt, Leonardo DiCaprio, Anne Hathaway, Cate Blanchett, Marion Cotillard, and many more.

In addition, visitors from around the world flock to Palm Springs for a variety of other unique tourism events and attractions that include hiking in the Indian Canyons, witnessing the spectacular desert views atop the Palm Springs Aerial Tramway, and the increasingly popular Modernism Week — an event held each February celebrating a renewed appreciation for the city’s famed midcentury modern architecture, as well as vintage furniture, clothing, jewelry, and much more.

When visionary architects like Richard Neutra, Albert Frey, John Lautner, William F. Cody, William Krisel, and Donald Wexler designed sleek, modern structures they felt were perfectly suited to the desert environment some 40 and 60 years ago, little did they realize that as America approached a new millennium their work would be more admired than ever.

Some of the most famous examples of midcentury modern treasures in Palm Springs include the 1946 Neutra-designed Kaufmann House, the John Lautner-designed home in Southridge for Bob and Dolores Hope, and the famous Tramway Gas Station, now the Palm Springs Visitors Center, designed in 1965 by Albert Frey, John Porter Clark, and Robson Chambers. It is their work that inspired Modernism Week.

Palm Springs’ famed village atmosphere is another huge favorite with locals and tourists who enjoy strolling among the unique shops, galleries, bistros, and coffeehouses — and no event is more popular than Palm Springs VillageFest. The Coachella Valley’s most heavily attended street fair, held every Thursday night in downtown along Palm Canyon Drive, features booths showcasing handcrafted items from around the world — while shops and restaurants stay open late.

“Visitors love VillageFest and often plan their trips around this year-round street festival,” according to Mary Jo Ginther, Director of the Palm Springs Bureau of Tourism. “Conventioneers also enjoy this event because it’s on a Thursday when many of them are in town on business. What could be better than strolling under the stars along Palm Canyon Drive!”

Palm Springs is also home to some of the finest golf resorts in the world. The city-owned Tahquitz Creek Golf Resort, which features two 18-hole championship courses, is a longtime favorite of Palm Springs golfers. The Legends Course, originally designed by William Bell in the 1950s, recently underwent a major renovation that includes the addition of 40 bunkers. The newer of the two courses, the Resort Course, is a Ted Robinson design that debuted in 1995 with a par-72, 6,705-yard course featuring a desert links-style layout. Both the Legends and Resort courses offer spectacular views of the San Jacinto Mountains.

An exciting renaissance is also underway when it comes to where to stay and play in Palm Springs. In fact, many of the city’s luxury resorts have recently undergone multimillion-dollar renovations — or are undergoing renovations now in response to a continuing wave of visitors who crave year-round sunshine and the relaxed desert lifestyle.

Some of the city’s renowned properties refreshing their look include the legendary Riviera Resort & Spa, which underwent a $70 million luxury renovation, as well as the trendy new Ace Hotel & Swim Club, which underwent a $25 million transformation from a Howard Johnson Inn. Additionally, the Wyndham Palm Springs is undergoing a $30 million renovation into a Renaissance resort and a $15 million renovation of the Hyatt Regency is underway in downtown Palm Springs. A new Mondrian Hotel, featuring the hip Sky Bar, is in the works near the Palm Springs Convention Center.

“Palm Springs is experiencing a tremendous renaissance when it comes to tourism and special events. The fact that so many hotels are choosing to renovate their properties right now proves that, despite a down economy, our city remains the premier resort destination in the Coachella Valley,” says Mayor Steve Pougnet. “No other desert city can claim the same kind of tourism investment or worldwide name recognition.”

Pougnet attributes part of this success to the city’s innovative Hotel Incentive Program, which qualifies hotels who have completed multimillion-dollar renovations to receive a rebate of up to 50 percent of any new transient occupancy tax that may be generated following a renovation.

“It’s a great incentive for hotels to renovate,” according to Pougnet, “These upgraded properties allow the Palm Springs brand to renew itself by reaching every generation.”

Palm Springs is also the ancestral home of the Agua Caliente Band of Cahuilla Indians, who continue to be a major force in the cultural and economic enrichment of the city. The tribe knew the area as “la palma de la mana de Dios,” the palm of God’s hand. Their ancestral healing mineral waters are still a part of the success of Palm Springs, showcased at the popular Spa Resort Casino, which is in the midst of planning for a major redevelopment, according to Todd Hooks, the tribe’s Economic Development Director.

“As one of the city’s largest employers and business partners, the tribe remains focused on the cultural, aesthetic, and the economic development impact of its activities in supporting the viability of Palm Springs” Hooks says. “With tremendous focus on the core downtown area, the tribe envisions developing a larger footprint for the Spa Resort Casino — adding more hotel rooms, restaurants, entertainment venues, and lifestyle attractions that will bring visitors from all over the world.”

In addition, Hooks noted that the tribe recently retooled the Agua Caliente Cultural Museum in downtown Palm Springs and has undertaken the operation of the Indian Canyons Golf Resort — which boasts two championship 18- hole courses nestled at the base of the San Jacinto Mountains.

The tribe is steward to 31,500 acres of tribal land in the Coachella Valley, including the Indian Canyons — Palm, Murray, Andreas, and Tahquitz — made famous in the 1933 Frank Capra film Lost Horizon. After being closed to the public for more than 30 years, Tahquitz Canyon is now open for guided tours and is a favorite Palm Springs attraction.

So as the city of Palm Springs celebrates 71 years of incorporation, this once tiny village where Hollywood celebrities and visitors from around the world continue to stay and play boasts a permanent population of over 47,000 residents and some of the finest resorts, golf courses, and spectacular tourist attractions in the Coachella Valley.

Rooted in rich history, Palm Springs — the desert’s ultimate resort playground — continues to “celebrate its past and present,” according to Pougnet.

As Old Blue Eyes himself once said … the best is yet to come!