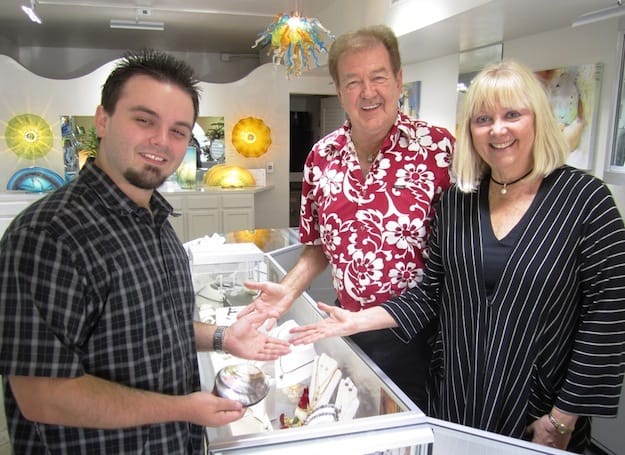 The object of his desire turned out to be a pearl, a Tahitian black pearl, after a friend showed him a handful of the luminous gems brought back from a visit to the South Sea island.

At the time, Don was in the gold jewelry business. In an instant, that changed.

“I just fell over by their natural beauty and decided then and there to open a store dedicated to Tahitian black pearls,” said Kelly. “I’ve had a love affair with the pearl ever since.”

Kelly’s wife Mary said when Don first opened his store in Hawaii, friends and colleagues were skeptical. "They said, ''What is this? One pearl? You’ll never make it with just this. You’ll soon be selling T-shirts with the rest of us,'” she recalled.

Mary laughs at the memory.

“We’ve had a wonderful business and career that began with that one pearl. For the first 25 years, we did nothing else but Tahitian black pearls.”

The couple have had stores on Oahu, Maui, Kauai, Balboa Island in Southern California, and in Florida. Currently they have one store on Maui in Wailea.

When they thought about opening a second gallery, Mary said Palm Springs immediately came to mind.

“People go to Hawaii for vacation, but when you live there, you have to find someplace else for your vacation,” she said.

That place for the Kellys became Palm Springs.

After visiting for the past 10 years as tourists, they decided to take the leap and open a shop when they found available space in the 1934 La Plaza complex.

“We love the location,” said Mary. “Being downtown in an historic building, we can feel the energy of the town and we’re charmed by Palm Springs.”

Their grandson, Kris Kane, moved from Chicago to manage the store. He’s looking forward to a winter “without having to wear a full body snow suit.”

Since opening, he said customers have been enthusiastic about the variety of pearls offered, and the edgy jewelry designs of Gary Ewing whose Midnight Collection is currently being showcased at the gallery.

Other artistic creations, aside from pearls, can also be found at Oasis Gallery, including glass wall art and paintings by Joshua Tree Artist Karine Swenson, who works with acrylic and oils.

Oasis Gallery is located at 119 La Plaza in Palm Springs. Store hours are 10 a.m. to 5 p.m., Monday through Saturday, and closed Sunday.