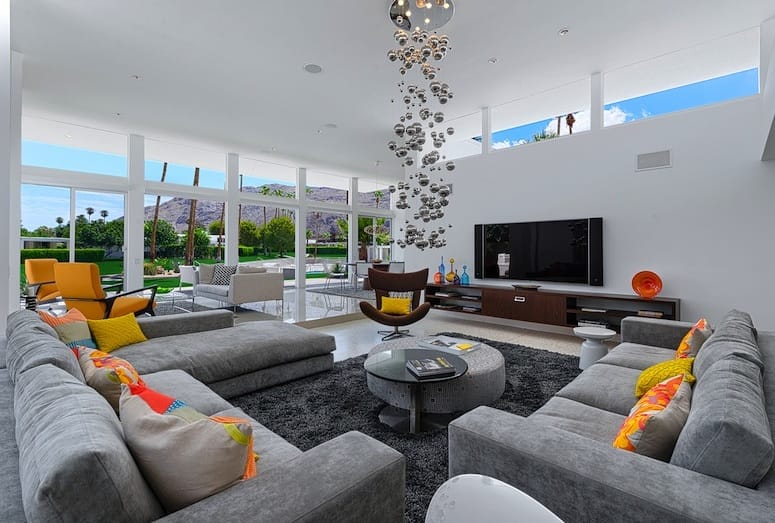 Tucked away in the southern reaches of the Indian Canyons neighborhood of Palm Springs, Kings Point is an enclave of midcentury homes designed by architect William Krisel in 1969. The Kings Point Homeowner’s Association website notes that Krisel “used an architectural style described as ‘International Modern’ . . . This style embodies strong vertical and horizontal aspects of the buildings, characterized by simple geometric forms, often rectilinear.”

A recent remodel of one of the community’s homes by Howard Hawkes and Kevin Kemper of H3K Design seems to have taken that axiom to heart. The living room before the transformation.

“We really were inspired to edit the space to show off all the existing clean bold lines of the house,” says Hawkes. “It had been nicely decorated, with an emphasis on ‘decorated,’ and there was a lot going on. All the décor distracted from the amazing architecture. A lot of that went away when the former owners moved out, but the house needed to be edited and the bathrooms and kitchen needed to be redone. They had been updated over the years but there was never an extensive remodel.”

The firm undertook a six-month renovation that completely transformed the 2,900-square-foot-residence for the homeowners, a couple who split their time between San Francisco, Washington, D.C., and Palm Springs.

Opening the kitchen to the dining area also provided the couple with vistas of the green belt running through the center of the community.

As evident in these dramatic before and after photographs of the renovation, every room in the home has been beautifully transformed while respecting Krisel’s vision.

EXTERIOR FRONT (Before & After): Hawkes and Kemper worked with a landscape designer on the front and rear landscaping and collaborated with her to come up with something that wouldn’t distract from the architecture. “She chose a series of Mexican Post Cacti to offer some screening and interest to the area in front of the sliding glass door and used various size rocks to enhance the desert feel,” says Hawkes. “The entire front was finished off with LED lighting that casts fantastic shadows of the Post Cacti onto the house in the evening.”

SITTING AREA (Before & After): A boring wall that was once just a place to hang a television now has a beautiful fireplace covered in Albastrino travertine. A new window, on the right, was also added. “The owners were so excited about the fireplace that we all decided to do an entire floor to ceiling accent wall opposite the room in the dining area,” says Hawkes. “We also reproduced the concrete block column to the right of the marble to make it look just like the existing one on the left. The owners definitely use this area and the fireplace as their ‘go-to’ hang out spot.”

MASTER BEDROOM (Before & After): With the exception of the addition of a small work area/office, very little was done to the master bedroom. “The back wall behind the headboard is painted just slightly darker than the rest of the room so that the dramatic white leather headboard would pop a bit against the wall color,” says Hawkes.

MASTER BATHROOM (Before & After): “The master bathroom is one of our favorite rooms,” says Hawkes. “All of the bathrooms share a similar vision and a similar tile, just different versions of it.  One is a ‘Z’ or ’S’ pattern, one is a chevron or a ‘V,’  and our favorite version is in the master bath which is actually the same tile as the chevron just layered in a different pattern.” The designers also added a soaking tub, two custom sink vanities with Cambria Stone "Whitney" countertops, and a separate toilet room that includes an auto-flush Toto urinal. “The shower was kept simple and LED accent lighting shows off a long niche and the soap/shampoo niche,” adds Hawkes. POWDER ROOM: Hawkes thinks that one of the coolest details they added to the home was the custom-made sink top in the new powder room, which was previously a closet. “We had a custom steel frame made to support it—the frame spans from side to side and all the plumbing connects from the side,” he says. “The sink/vanity top is pulled off the back wall about five inches and up-lit giving it a floating effect. If you lean forward and look behind the vanity, there are no pipes, wires, etc.”

BACK YARD (Before & After): “We tried to keep as much of the hardscape as possible and collaborated with a landscape architect who worked with the homeowners on the actual plants, rock and gravel, and outdoor lighting selections,” says Hawkes. The designers also created several different seating areas and a complete barbecue cooking area off the kitchen.

KITCHEN (Before & After): The kitchen was challenging because if we widened the counter area under the window the entire kitchen would have been asymmetrical, in a bad way, and the kitchen sink would have only been partially under the window,” says  Hawkes. “The countertops are Caesarstone and the tile is a beautiful white, half-baked tile that adds a lot of texture rather than color and goes with the overall tile scheme of the house. The kitchen backsplash is also absent of electrical outlets as we cleverly hid them so they are accessible but out of sight."

DINING ROOM (Before & After): The dining room was one area that didn’t need much work. “We did add a beautiful Moooi LED chandelier that really helps to define the space,” notes Hawkes.