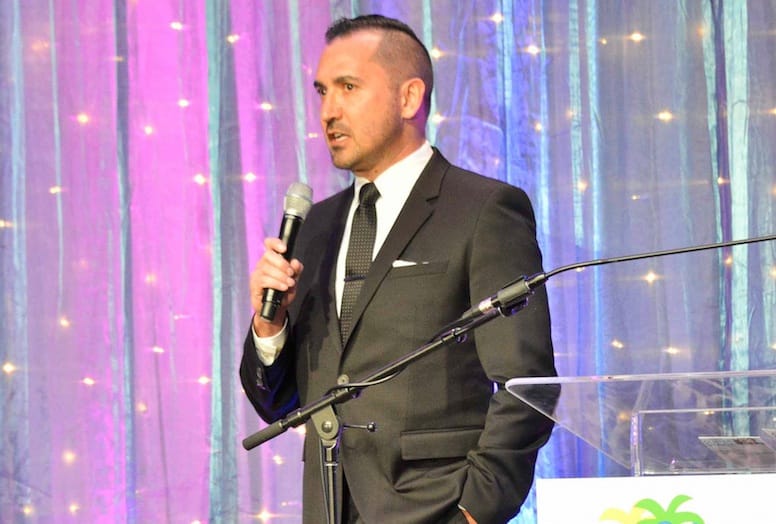 Mike Thompson speaks at a recent event for the The LGBT Community Center of the Desert.
Photo by David A Lee

Palm Springs is considered one of the most gay friendly spots in the country.

But calling Palm Springs home and connecting with like-minded people can still be challenging.

The LGBT Community Center of the Desert provides a bridge to bring LGBT people together through a variety of health and wellness offerings.

“I tell people all the time that I believe our competition is isolation," says Mike Thompson, executive director of The LGBT Community Center of the Desert. "A community center’s job is to bring people together and create opportunities for connection. Our work is about creating a vibrant community. We all live in this great place together — how can we do life together?” A native Oklahoman, Thompson came to The LGBT Community Center of the Desert nearly a year ago. He has worked in several major U.S. cities and understands that each community has its own set of needs.

“A very common issue that I’ve learned in my 10 months [in Palm Springs] is that a number of people move here with a spouse who, after the spouse passes, find themselves left with, 'How do I do live as a senior gay person on my own, when that wasn’t my plan?'" Thompson says. "We’ve got to tailor our programmatic needs based on the uniqueness of the communities within our larger community.”

Thompson, who began his nonprofit career as executive director of a school for special needs children, says he “stumbled” into LGBT work upon relocating from Denver to Salt Lake City. His goal of raising money to oppose Utah’s anti–marriage equality amendment led to a job with Equality Utah. From there he founded One Colorado, an organization that advocates for Colorado's LGBT community, before moving to Los Angeles, where he served as chief operations officer and, eventually, acting president of GLAAD (Gay & Lesbian Alliance Against Defamation).

But his passion, he discovered, was seeing firsthand the impact of community-based work.

“While I loved my experience at GLAAD, and I think it’s important to have conversations about how LGBT people are portrayed in news and entertainment media,” he says, “I found that my heart sings whenever I’m on the ground having a connection with those who are impacted by the work.”

Inspiring people comes naturally to Thompson, who believes the responsibility of a good leader is to tap into a colleague's unique characteristics to help them unlock their potential. For example, Thompson says one of his happiest accomplishments is that seven people who have worked for him have ended up as executive directors themselves.

“One is a young woman who is now the executive director of the Utah Democratic Party,” he says. “She was a field coordinator on the campaign in 2004. I hired her as an intern and created a position for her at Equality Utah while she was in college. To see her named as executive director of a statewide political party makes me incredibly proud.”

In addition to his passion for mentoring, Thompson is also enthusiastic about photography and animals, which led him to write and publish an inspirational book, Lessons From Gordo the Dog.

As for his long-term vision for The Center, Thompson envisions the organization as one day having a positive impact both inside and outside the Coachella Valley.