“People want to get away, and that desire to travel and experience new things is not going to disappear.”

A formidable powerhouse has sucker-punched the world to the mat. But is the Coachella Valley down for the count? Community leaders aren’t about to throw in the towel.

Greater Palm Springs Convention & Visitors Bureau reports that Southern California’s nine-city paradise attracted 14.1 million visitors last year, with an economic impact weighing in at $7.5 billion. But this past spring, COVID-19 knocked down revenues 91 to 100 percent for more than half (56 percent) of the 200 businesses responding to a Coachella Valley Economic Partnership survey.

• READ NEXT: View the Digital Edition of Vision.

CVEP’s CEO, Joe Wallace, acknowledges the integrity of the desert’s reputation as an escape from bad weather and the hustle and bustle of big cities. But he sounds a warning bell over dismissing the potential for this strength to also constitute a weakness.

“We are overly dependent on tourism, and that tourism has been dependent on big events that require people to be in close proximity,” he worries. “We will continue to enjoy the Palm Springs brand. But when will tourism be back to where it was in February? All our eggs are in one basket. National reports say that basket is not going to come back for four or five years.

“This is a great opportunity for the Coachella Valley to do what it should have done in 2001 [the year of the dot-com bubble burst and 9/11] and 2009 [the end of an 18-month recession],” Wallace continues. By that, he means diversifying the local economy, especially by introducing tech businesses into the hospitality mix of attractions, hotels, and restaurants.

Scott White, president and CEO of the CVB, contrasts the 2020 environment with the 2008-2009 recession based on his organization’s shift in focus during those intervening years from attracting group business to informing travel-lusting consumers at large about the area’s “pillars like art and culture, outdoor adventure, and health and wellness,” as well as to building a “roadmap of access.” To that latter point, White says that JetBlue, in July, committed to restoring Palm Springs air service on Oct. 8 with four flights a week.

“Our resiliency [since 2009] has changed because we have a more educated customer,” White claims, though he divulges that he would prefer that tourism was not the desert’s No. 1 industry. “If high tech was No. 1, that would help us on several fronts.”

The concept bears weight precisely because COVID-19 has shown companies that employees can work effectively from remote locations. Specifically, White says, “We are hearing of more and more executives from the Bay Area looking for homes here.”

“We will not be hit as hard as other destinations. Americans will still spend money ... That’s a big opportunity for the Coachella Valley.” 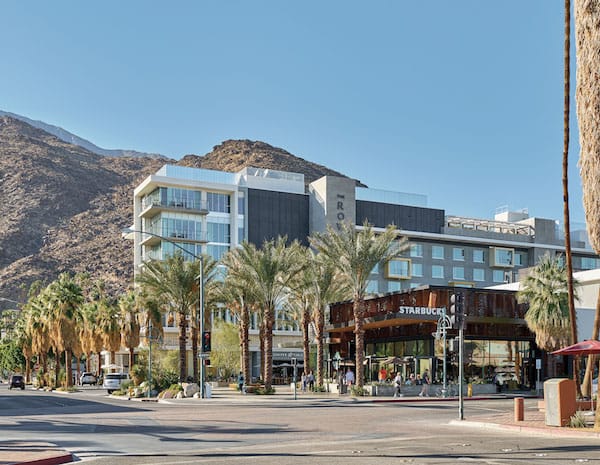 This is where tourism proves to be a contender for their dollars: “If it wasn’t for tourism and marketing and branding, we would not even be on their radar as a remote destination,” White asserts.

A third-generation resident whose family has owned businesses in the Coachella Valley since the 1970s, Adam Gilbert views the situation through a long and pragmatic lens. “We are a community that has gone through ups and downs across decades. We deal with a harsh summer climate. It’s built into the makeup of our community to deal with a boom during the season and then essentially a bust,” says the broker of commercial and residential real estate (The Firm Commercial), owner of a shopping center, and lawyer.

“My interpretation [of the situation] is that we are going to lose some foreign tourism and see a huge increase in the drive markets. [Greater] Palm Springs allows people to have a different experience and climate without jumping on a plane,” he reasons.

Like Wallace and White, Gilbert sees opportunity in telecommuting. “Our residential market has been on fire. People want to work here,” he says. In fact, he wonders whether a shift away from office space might lead to an increase in multifamily housing.

“That’s where creative entrepreneurs look for ideas,” he suggests.

Michael Braun, president of Grit Development, which owns property in Palm Springs’ essential downtown, remains a staunch believer in the Coachella Valley as a place to live, work, and recreate.

“We will go through a painful adjustment,” he acquiesces. “However, we will not be hit as hard as other destinations. Americans will still spend money — just in different ways and more likely in [proximate] places. That’s the big opportunity for the Coachella Valley.”

“Tourism is a very important piece of the puzzle to attract the next generation of workers.”

Braun holds that the desert’s abundance of outdoor recreation and ever-on-vacation aura will remain attractive to retirement-age people with elevated fixed incomes.  “Humans want to be entertained. They do not want to be bored, and this is especially the case for baby boomers,” he says.

The area’s economy is resilient from certain standpoints and vulnerable from others, according to Greater Coachella Valley Chamber of Commerce president and CEO Joshua Bonner. “We have three major drive markets — Los Angeles, Orange County, and San Diego. That provides a large pool of tourists we can tap,” he says. “Another advantage is that we have a lot of retirement income in the desert, and that income is holding up. The third [advantage] is more speculative, but it seems that people are starting to move out of urban markets. The desert is a very appealing place to live.

• READ NEXT: What is Ahead for the City of Palm Springs?

“The majority of our economy is based on tourism. When you enter into any recession, you do not want to be in that position,” Bonner concedes. “But people want to get away, and the desire to travel and experience new things is not going to disappear. I think what people will do is modify their travel behavior closer to home. And I think that works to our benefit.”

While the desert economy needs to diversify, the experts agree, tourism remains essential to its long-term sustainability. “Without tourism, you wouldn’t have flights here,” White says. “You wouldn’t have the quality of life, restaurants, attractions, and events. Tourism is a very important piece of the puzzle to attract the next generation of workers. Optimist that I am, I think that COVID-19 is probably going to be an accelerator for the growth of our destination.”

Braun credits civic leaders with recognizing that an active business district is key to a vibrant community. “It’s the economic concept of a flywheel,” he says. “Get it spinning and it requires less force to make it move faster and faster.”

And, as he points out, even a pandemic cannot wipe out nice weather.

Greater Palm Springs Convention & Visitors Bureau launched a pair of campaigns to respond to the pandemic’s impact on tourism.

One took a tongue-in-cheek approach on social media with “Dear Home” letters suggesting that maybe it was time to spend a little time apart.

The CVB reports that more than 400 businesses signed on and attributes 550 room nights booked in June and July as a result of advertising the pledge.