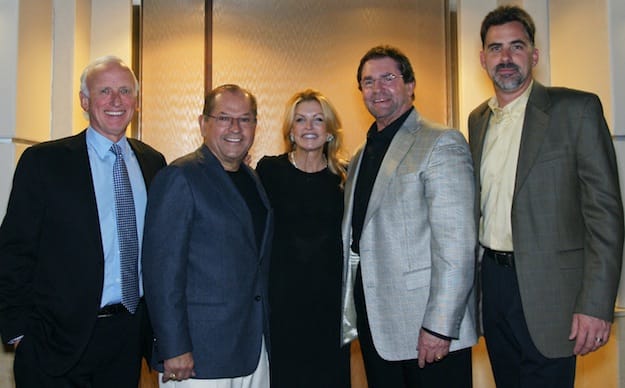 Peter Webster picked the one day it actually rained in Palm Desert.

The co-owner and president of Roberto Coin still managed to get in a round of golf on Dec. 13 around the raindrops with a select group of customers as part of an event marking the one-year anniversary of the luxury jewelry boutique opening on El Paseo.

That evening, Webster shared a meal at Mastro's Steakhouse in Palm Desert with the store's top customers.

In the media kit for Roberto Coin, Webster is described as a sport aficionado who possesses a master's degree in law and economics from Cambridge University. When he met Roberto Coin in 1977, Webster was a CPA. Coin, who was born in Venice, Italy, had been the managing director of a 5-star hotel in Geurnsey.

Their paths to that point had very little to do with the jewelry industry. The Roberto Coin line launched in 1994 and within two years Webster was bringing the brand to the U.S. He still does. The Palm Desert store became the eighth boutique store to open in the U.S. last year.

As he was headed to Los Angeles the next morning, Webster spoke with Palm Springs Life on the telephone about the unique partnership.

What convinced you and Roberto to try the jewelry industry?
We thought it looked easy.

What was the biggest challenge in starting this business to get your product recognized internationally?
I think finance was the most difficult because the jewelry business is very capital invested. Gold is not cheap and no one will lend it. That's what we had to learn. We were running on shoe strings to start with, so we had no expenses. We plowed everything back into the business.

What do you know now that you wish you had known then?
If you maintain a high level of customer service, any business can succeed because you have to listen to your customers.

Sounds like you had a strong belief in the product to believe it was going to succeed.
Roberto is amazingly talented. He's one of the most creative people in the jewelry industry. It was a duck to water. He was just good at it. He comes up with between 600 and 1,000 new designs every year, which is an accounting nightmare and will give you a headache, but it's worth it.

So are you the brains behind the artist?
He's actually pretty good at the numbers. He ran 5-star hotels in London for awhile, and he covered all aspects of the business. Our business took off in 1995 because we learned to listen to our clients.

How has the jewelry industry weathered the economic struggles going on here and abroad?
Europe is very, very tough. We have focused a lot on the Far East, Middle East and America still. America is more than 50 percent of our business. The items under the $1,500 price tag are strong, and over $25,000 is strong. It's a little bit in the middle that has been soft. Because we have such a strong cross-section of selections, we can adjust quickly to the state of the market.

Do you think the market is improving?
In the next 10 days , yes. 2013, I think the jury is still out as well as your politicians.  It will make a big difference where everything settles.

What was the hot item for 2012, and what appears to be leading 2013?
We have these 13 bracelets. They are called Primavera, which means 'spring' in Italian. They start at about $1,000 and go to $4,000. Anyone can wear them.  They pull over the wrist. They have a clever mechanical technique that we developed. And then a lot is still black and white. Black sapphires and white diamonds make quite a contrast. We're selling a lot of those. I think that will carry on in 2013.

What is the best part of your job?
Meeting people. It really is fun. I met some amazing people here. I met people from the hotel industry to the legal profession to retirees. Everyone had a story.