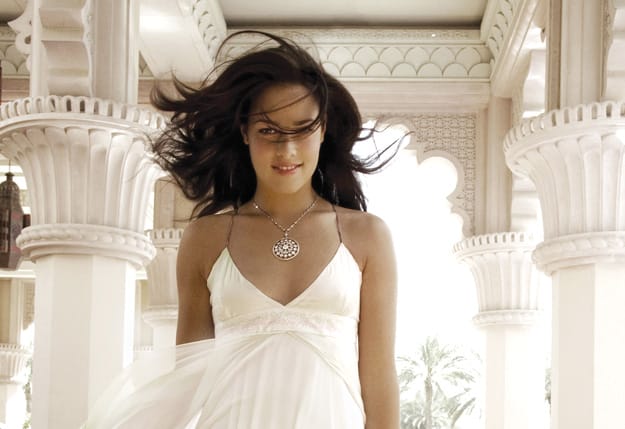 On a warm evening a year ago, a group of eight shirtless teenage boys sat in the Indian Wells Tennis Garden stands watching Ana Ivanovic with rapture. Having trekked to the desert from the Charlie Hustle Tennis Academy in Colorado Springs, Colo., they spray painted each of their chests with one of the letters of “Ivanovic.” Sam Martin, fourth in order with “N” emblazoned over his thin frame, showed off three photos of the tennis star on his cell phone. At the next changeover, he led the squad in a cheer, screaming at the top of their lungs, “Ana, Ana, Ana!”

Ivanovic gazed up for a scant moment, then resumed her game face.

Having won last year’s Pacific Life Open, the 21-year-old Serbian tennis star defends her title in this month’s event, renamed the BNP Paribas Open. “It’s one of my favorite tournaments,” Ivanovic says. “It’s so peaceful, and the scenery is beautiful. I feel very comfortable there.”

Even her practice sessions drew large crowds last year. Her hitting partner was Marcin Rozpedski, former coach at College of the Desert and a teaching pro at The Lakes Country Club in Palm Desert. While others’ practice sessions are conducted in monastic silence, Ivanovic’s workouts were punctuated by Rozpedski’s frequent jokes and Ivanovic’s beatific smile, interrupted by her occasional yelp when she’d miss a shot or drill one past her partner. Practice Court D at Indian Wells Tennis Garden became grand theater in its own right.

“Ana’s got a stunning personality,” says tournament Chairman Charlie Pasarell. “Her looks, the way she carries herself, her personality — it’s all exemplary. She seems to relate very well to the public, to the fans. But make no mistake: She’s an athlete, a real competitor.”

Arriving at Indian Wells a year ago, Ivanovic was merely an engaging ingénue. By the end of that week, her powerful ground strokes and attack were razor sharp. In winning the title, she emphatically validated her status as a force with which to be reckoned.

It was but a prologue. At the end of May, Ivanovic arrived in Paris for the French Open — one of tennis’ four most important titles. She was eager and confident. Rozpedski was there too, having proven himself to Ivanovic and her coach, Sven Groeneveld, as a worthy practice partner. The previous year, Ivanovic reached the French Open finals. This time, she won and claimed the position as the world’s No. 1 women’s tennis player.

“These weren’t just baby steps she took,” says former world No. 1 ranked Tracy Austin, “These were large steps. She has a good team in place, she works hard, and you can see it all pay off in these kinds of results.”

In conversation, Ivanovic is engaged, chatting in the carefree way of a college freshman pondering potential majors. She is, in fact, prone to study — to the point of taking time out from her days in Indian Wells to trek with her entourage to a bookstore, where she poured over books on philosophy and psychology. But she’s also prone to the frequent giggle, displaying a refreshing level of innocence that can rapidly vanish in the business of professional sports.

“You can tell she’s good at keeping things in balance,” Austin says. “It’s nice to see someone not jaded, but always enthusiastic. That’s commendable in tennis, where you can age rapidly.”

Don’t let her laughter fool you, though. Ivanovic has long been exceptionally determined. Consider what it has taken for her to reach this stage. At the tender age of 5, sitting in her family living room in Belgrade, she saw Yugoslavian Monica Seles playing on TV, found the phone number of a local tennis center, wrote down the number, and demanded her parents provide her with a racket and lessons.

But there were other remarkable, intrusive factors. Ivanovic was 11 when NATO commenced bombing raids on Belgrade. “You realized that they are not bombing just everything, only certain buildings,” she says. “So after a month, I started practicing, and that was good.” One of her prime practice spots was an abandoned swimming pool, which explains much about the forceful, concussive way she strikes the ball.

By the time she was 15, Ivanovic so impressed Daniel Holzmann, a Switzerland-based entrepreneur, that he relocated her to his country for more training and provided sponsorship money. After losing the first time she played in front of him, she cried for hours, worried that he would end their relationship. He didn’t; and three years after they met, she became one of the world’s top 20 players. She has repaid Holzmann — and then some, given her wide range of endorsements and earnings (more than $6 million in career prize money).

While Ivanovic rapidly ascended after last year’s Indian Wells victory, the second half of 2008 was a different story. Upon winning the French Open, her record was 27-6. Over the rest of the year, she won only 11 of 20 matches, a frustrating patch of play that included exceptionally early exits from two of tennis’ other major events: Wimbledon and the U.S. Open. A mysterious thumb injury made it hard for her to practice and compete with her trademark confidence.

But there was also the matter of having gone from being the hunter to the hunted — the expectations that come with winning major titles and defending territory week after week while also trying to improve. Maybe the French Open win and the No. 1 ranking added up to a case of too much, too soon. By the end of the year, Ivanovic was ranked fifth in the world — amazingly enough, one spot lower than she’d finished at the end of 2007. “I’m a more mature player,” she says, reflecting on 2008.

“I try to take something from each new experience, to learn from it and improve, to become a better all-around player. I’ve learned a lot about myself.”

In some ways, returning to Indian Wells is a case of Ivanovic coming full circle, back to a place where her ascent kicked into high gear. “It helped a lot in terms of ranking points, of course, but more in terms of confidence,” she says. “Also, with every win, you get motivated to trainer harder, because you can see that the hard work is paying off.”

“No question, she had a tough second half of the year,” Pasarell acknowledges. “I think what we’ll see in 2009 is a calmer Ana — an Ana who’s a bit less eager to pump her fist and more serene. She has this rare mix of poise and passion, this way of being focused yet engaged. It’s stunning. People enjoy someone who’s so good and so nice. They fall for her.”