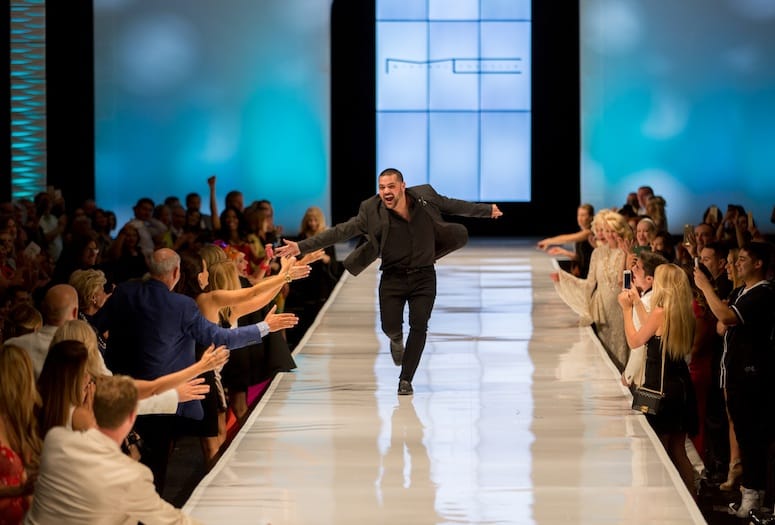 Bare shoulders, toned tummies, long legs, and décolletage — most often in beautiful taste—were some of the biggest stars of the Stars of Project Runway show on April 5.

Michael Costello and nine fellow designers from seven seasons of Project Runway seized the warm-weather timing to reveal whatever was on their minds. These cheeky (yes, those cheekys) Spring/Summer 2016 collections created specifically for the desert’s annual fashion event framed barely the bare essentials. And no one seemed to mind.

• To view the VIDEO of each Project Runway designer's show, visit www.fashionweekelpaseo.com, and click on Designers.

Only Costello has roots in this area. For this versatile crew, however, the runway itself feels like home: the place that launched their first lines. Drama, cattiness, tears, backstabbing, and fashion regrets were left for the reality show reruns. Here, collections were cohesive and professional. The designers’ group hug at the show’s closing affirmed genuine respect for their colleagues’ talents. Modeling slinky summer dresses and their least comfortable shoes, women holding wine glasses filed into the tent for 10 distinct fashion shows rolled into one. Between each, the next designer’s name or logo flashed on the screen as his or her personal soundtrack set the mood and the styles in motion. From a range of backgrounds (self-taught to advanced degree), all came with something to say.

People in the audience certainly didn’t need to be familiar with the television series to enjoy the production. Yet raucous appreciation as each designer took a victory lap hinted that the crowd had followed these former contestants along their individual paths. Absent sharp commentary from the judges or Heidi’s deadpan declarations, guests were free to decide which ones made it work. The show highlighted the designers’ emerging and established careers through crop tops, high waists, knee socks, and fluttering hems. Sheer fabric was almost a theme. Sheer pants, sheer skirts, and multiple versions of sheer dresses over bikinis and lingerie got the point across. Black, white, lipstick red, and hot pink defined the palette. Solid colors let the cuts and cut-outs do the talking, yet stripes, chevrons, dots, and the occasional floral print held their own.

The most sensible, wearable pieces earned every moment on the runway. Anthony Ryan Auld took a risk with easy, ultracasual wear. Short, ombre jean shorts and wide-leg denim pants received a layered treatment thanks to breezy white cotton. Christopher Straub captured a 1980s teen sleepover, fueled by hours of video games. With hands in their pockets, models donned “Space Invaders”-printed tops and a dress that read, “Game Over.” Sunglasses let us know they had stared at the screen too long. Playful and interesting, Peach Carr flaunted her flair for having fun. Lobster-covered pants and sheer white culottes received nods, but a sassy maxiskirt of blue ruffles stole her show. Hawaiian designer Kini Zamora proved unpredictable with an artful array of Mondrian color-block prints. His flouncy swing skirts started thigh high then rushed to dust the floor.
Jesus and Antonio Estrada played with lengths and structured shapes. A mermaid-flared skirt complemented a top of the same silhouette in the twin brothers’ fitted and feminine collection. Justin LeBlanc’s ensembles moved from richly beaded sleeves and cloaks that fell in folds and waves to dresses painted like drop cloths. Most memorable were sheer fabrics covered in tiny red tassels that swayed to the music like a school of angry betta fish.

Among such beauty, much of Valerie Mayen’s work felt as confusing and misdirected as her oddly striped babydoll dress. The successful Mychael Knight’s designs seemed purposefully uncomfortable. Garters over miniskirts, exaggerated cut-outs, criss-crossed bodices, even metal bars across the back that seemed to hurt the audience’s eyes. Bulky cuff bracelets and foot-long tassel earrings added to the angst. Overly slitted and overly strapped in all the wrong places, some bondage-inspired frocks made the bodycon dresses worn by confident attendees look like cozy PJs. Nevertheless, these two garnered intense applause and audible admiration. Is it really Fashion Week without biceps and a few banana hammocks? As predicted, Casanova turned every head in the house with skimpy men’s swimsuits. Teamed up with tube socks, bomber jackets, leather flying caps, and duffel bags, they were, all agreed, an unusual choice for a pilot’s uniform.

Michael Costello had his own version of scantily clad, but everyone was well-prepared. His video introduction to the show lamented that his female relatives might be shocked and dismayed by his plunging dresses and see-through fashions. Although V-necks dipped to new lows and red-carpet gowns stretched from daring to triple-dog dare, Costello’s racy designs were never raunchy. Constructed almost exclusively in black fabric that shimmered like starry constellations, they emphasized the female form while honoring instead of exploiting it. The encore walk of his sexy and formal collection was like an army ready for a glamorous battle, as long as they didn’t have to move too much. As Lifetime’s enduring TV show for the fashion-obsessed prepares for Season 15, the evening’s standing ovation mirrors the ratings that keep it on air. Every designer surely felt the enthusiastic support customarily reserved for a Fan Favorite.