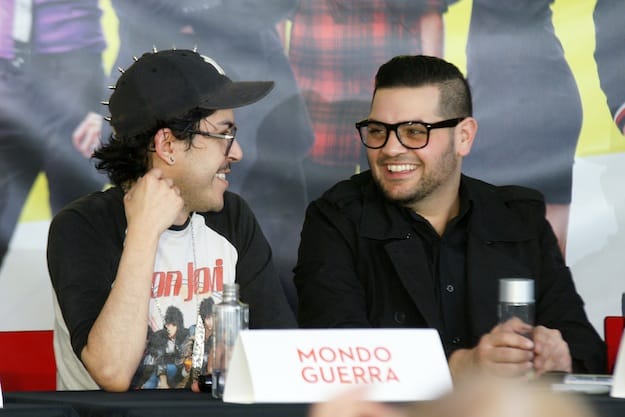 The outside world doesn’t exist when you’re a contestant on the hit reality TV show, “Project Runway”.

Cell phones are immediately confiscated. No TV, newspapers and no contact with immediate family for at least five weeks.

“They literally block the windows. They don’t want you looking outside,” said Bert Keeter, a Season 9 contestant. "Project Runway" is currently airing its 11th season on the Lifetime cable channel.

Michael Costello, the Palm Springs finalist from Season 3, detailed a stairwell where contestants hang out waiting for that week’s episode to be taped.

“The sad thing is that we cannot talk to each other,” Costello said. “It’s really tough. We can sometimes sit down next to each other and not talk for 2 hours, sometimes 3 hours. Production has this word. It was the worst word ever. ‘Ice’. They would look at us and say ‘ice’. ‘Hard ice’ is when production was really upset with us.”

They will show off their designs Wednesday night (March 20) followed by an after party at The Viceroy, and then return to the white tent on Larkspur Lane Thursday (March 21) for a trunk show from 11 a.m. to 3 p.m.

At Wednesday morning’s press conference in the white tent, attendees were interested in anything the TV cameras don’t reveal about the show and its cast.

Here’s a sampling of the questions and the responses.

What happens to the clothes you make during Project Runway?

Seth Aaron: “Everything is auctioned off immediately. The clothes that are produced by us go up for auction immediately after the show.”

“It’s clearly stated that these may or may not be finished,” joked Cook.

How did you go about applying for the show?

Anthony Ryan: If you are going to apply online, it’s literally a two-month process just to get it together. To get photographs, everything catalogued, a website to send to them. From there, you go to a private casting. I went to Dallas and they invited x-amount of people. There is a panel and you show them what you got, and they make cuts. You either get a call to come back or not, and then you get videotaped for an hour. From there, they won’t call you for like two months. Literally on Season 9, I got a call two weeks before I was supposed to leave for New York, and they said pack like you’re going for the summer, but you may be coming back because in our season, they brought in 20 and four were cut immediately. So I packed for three months thinking that I may come back in a week. So you basically pack your entire life up.”

Korto Momolu: “When I did it (on the Bravo series), it was actually like ‘American Idol’. I remember being on the streets in Times Square in front of the W. Everybody was there. Anyone could audition. You had to do your application part and have it with you. I remember this guy coming around and look at everyone’s stuff, and telling some people, “Honey, just go home”. You would actually see Timothy Gunn. They tell you right then and there if you are going on to the next round, and go home to make a video and you have two days.”

Do you actually go home when you are eliminated from the show?

Bert Keeter: “They don’t let you go home. They basically keep you sequestered. You all travel in a pack even if you are the first person voted off, you’re there five or six weeks. They separate you and you go down to the basement and stay down there for 12 to 14 hours. So the people who watch the show can’t tell who is off the show. It’s torture.”

Is the drama for real? Do you really say those things about each other?

Mondo Guerra: “When you’re working so much, you’re so focused on the work and being in the room with everybody else. There is so much energy whether it’s negative or positive. When you go into that producer interview, it’s like therapy. You can let go and we do say certain things about certain people.”

Korto Momolu: “Imagine this whole front row, someone says you get to live together for five weeks, you don’t get to talk to your family so you have each other, you can’t talk to each other, so obviously you get into that confession room and they tell you someone said your skirt was kind of jank. So you go after the person and ask them if they said your shirt was jank. You just go for the jugular.”

Anthony Ryan: “What do you classify as drama? It’s you getting us fully. If you want to see me, you’re going to see every solid inch of me if that makes sense. We’re filmed 24-7. So if you see me have a breakdown, I’m having a breakdown. It’s not necessarily drama, it’s me being a person. I don’t know if the producers love it; they just want us to be ourselves.”

“We shoot an episode every 2-3 days, so there’s not a lot of sleep,” Bagshaw said. “Not a lot of time off camera. Everything that happens is real. The whole experience is to elevate the work that they do. We do challenges that push their creativity to deliver their best work. In the moment, because it is tough, it may not feel that way for the designers, but ultimately when you look at the show you are either proud of the work or you may be slightly embarrassed, but it shows a full experience. At the end of the day, we’re funny, rude, intelligent, witty, embarrassed, stupid, but all of that has to be condensed from 12 people into 43 minutes of TV every week. So of course we’re going to see the extremes of someone’s behavior. Hopefully, we always show the truthful side of everyone and it’s always in context.”