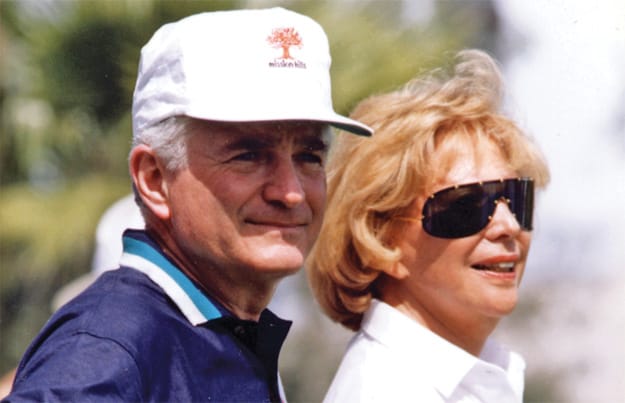 Jane Blalock, Julie Inkster, Sandra Palmer, Donna Caponi, Nancy Lopez, and Amy Alcott may be the names most Kraft Nabisco Championship fans recognize. But followers of the golf tournament should at least know Neil Golub’s face. The president/CEO of Price Chopper Supermarkets has played in the pro-am portion of the competition every year since the original Colgate Dinah Shore in 1972. He has been teamed with the aforementioned pros, as well as Dinah Shore — and won twice.

Jane Golub, Neil’s wife, has played in the tournament as well, but preferred the less-stressful “ladies day” play. Neil has a 4 handicap and Jane a “left-handed, competitive 28.” With their food industry ties, the Golubs have been invited over the years by the various title sponsors. This year, only amateurs paying an entry fee can play with the pros — and Neil was not about to let his long-running streak of play lapse (Jane is happy to play cheerleader).

The couple harbors fond memories of Dinah Shore. “She was a fabulous lady,” Jane says. “The two of us did needlepoint, and she would say, ‘Hi, Jane,’ without my name on a nametag, ‘How are things in Schenectady, New York? Are you still working on that needlepoint?’ I played with her and Lee Annenberg on ladies day. It was very exciting to be in her presence. She had a house on the ninth hole and there would be a chef in her house. When you finished playing, he would cook hamburgers on her fireplace. You just felt good and comfortable.”

“She would pick up the conversation where she left it off the year before,” Neil echoes. “She was a warm, gentle lady, but a competitive golfer.”

In the early years, the Golubs would be among a small crowd of 50 or 60 guests in a Mission Hills house enjoying entertainment by Dinah and her friends, including Frank Sinatra, Jack Lemmon, and Burt Lancaster.

Although Neil plays in other tournaments, “The Dinah” (as the Golubs still refer it) is the only one he plays religiously. The couple comes here a few days before the tournament and stays through the end every spring.

“We used to love to attend the La Quinta Arts Festival,” Neil says, adding that works they purchased hang in his office and in their house. The tournament and art festival dates no longer coincide, but the Golubs visit local galleries and shop at the Cabazon outlet stores. They also visit supermarkets “to see who’s doing what,” the Price Chopper CEO says. “We spend most of our time at Mission Hills. It’s always an opportunity to see friends from around the United States.”

Back home, team photos from the tournament fill a wall — reminders of what they find special about the event.

“It’s the competition, the beautiful weather. It’s Palm Springs and the mystique of Palm Springs,” Neil says. “I love playing the golf courses and looking up at the mountains and the lush green of the fairways. It’s just a very captivating place, and we feel warm being there and very much relaxed.”