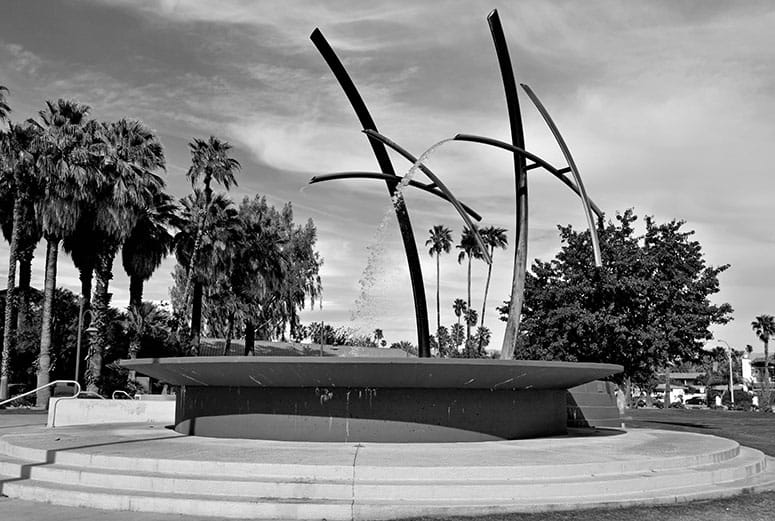 The "Rainmaker Fountain" has gained a foothold on YouTube.
PHOTOGRAPH BY DICK EBERT/ENCIRCLE

Search for “Rainmaker Fountain Palm Springs” on YouTube, and you’ll uncover an alarming number of videos devoted to the kinetic water sculpture created by artist David Morris. (To be fair, “alarming” is a subjective term. But for this messenger,  more than, say, five videos showing love for a water fountain in the bone-dry desert is deserving of the adjective.)

Located in Frances Stevens Park on the brink of Uptown Palm Springs, Rainmaker is a nearly 25-foot-tall sculpture with four colorful arms that bob up and down as they slowly fill with water then tip, depositing the water into a large basin. There is also an adjoining amphitheater — where one is presumably meant to sit and enjoy the cool breeze coming off the dancing water-dumping wands — as well as a smaller kiddie pool.

The fountain was born out of a 1988 decree from then-mayor Sonny Bono for public art. His administration formed the city’s first Public Arts Commission (PAC), and it was thought that a fountain on the corner of Alejo Road and Palm Canyon Drive would bring traffic to what was at the time an underutilized part of downtown. Rainmaker made its debut in 2000, and from the beginning opinions were mixed. Fans called it a landmark; detractors decried it as an unsightly money pit.

Unfortunately, it seems the artist did not take into account the city’s super-calcified water and often intense winds, and in 2007 the PAC unanimously voted to decommission the work because of its high maintenance costs (figures bandied about ranged from $50,000 to $70,000 per year) and the simple fact that it often did not work. Also factored into the decision was the unpleasant reality that many of the city’s homeless had adopted the fountain as a bathing facility. A bathroom even. A month after the vote, however, the City Council decided to investigate further before taking action. Rainmaker remained.

During the drought of the 2010s, the fountain was again the subject of controversy. “I know the city is working at being responsible, and flowing water is not something you should see upon arrival into town,” stated one PAC member, according to the minutes of the May 14, 2015, regular meeting. Indeed, all of the city’s fountains were shut down for a spell, until the Council voted to turn them back on, Rainmaker included, in July 2015.

Despite the back and forth, fans will be glad to know that Rainmaker is here to stay. Says Jennifer Henning, public arts and special projects coordinator for the City of Palm Springs, “This work is part of the city’s permanent public art collection and will remain on display and operational.”