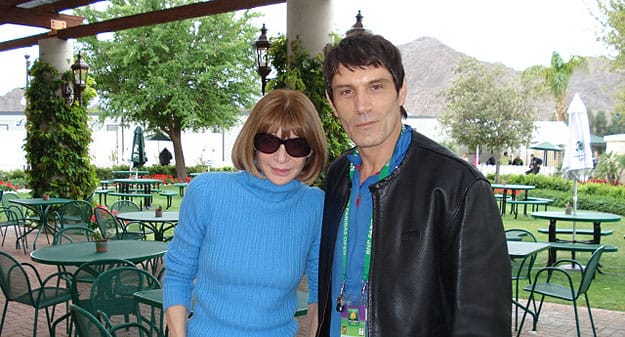 The famed editor of American “Vogue” had coffee with Roger Federer and his wife Mirka and then stayed to watch the Federer vs. Nadal semifinal match.

Wintour, a longtime friend and confidant of Federer’s, wore her trademark dark sunglasses and a blue sweater with white pants. Sans bodyguards (a rare occurrence), she granted www.palmspringslife.com an exclusive interview (also a rare occurrence), as she visited with Mirka after Roger left.

Wintour generously offered a fashion statement to www.palmspringslife.com on tennis attire. “I think those who wear clothes on the court that are a little bit simpler usually look the best.”

Wintour has been spotted watching tennis at the U.S. Open in Flushing Meadows, NY, but this was her first time at the BNP Paribas Open in Indian Wells. “I’m just glad it stopped raining,” she teased.

A legend in the fashion industry, Wintour is believed to be the model for the main character in the book-turned-to-film “The Devil Wears Prada.” She was also depicted in the 2009 documentary “The September Issue.”