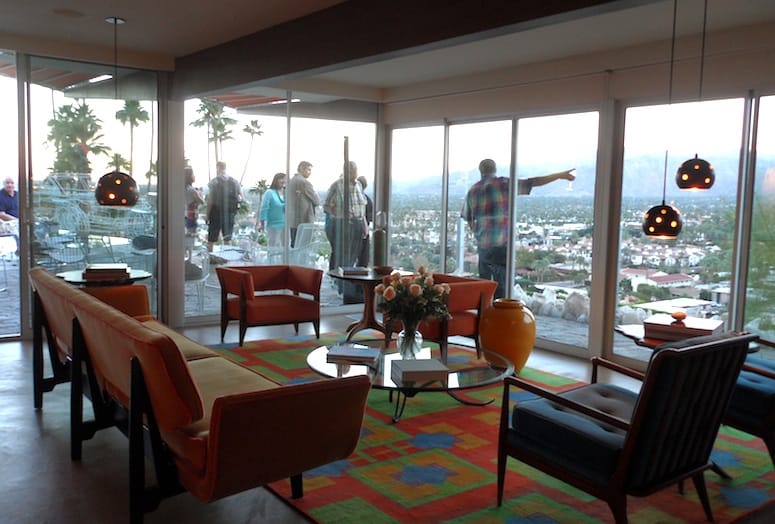 While the go-go boots and 1960s vintage glad rags have been put away, the memories and afterglow of the 2015 Modernism Week still remain. With more than 200 fun events, it was impossible for a mere mortal to attend them all, but what follows is a just a snapshot of a few fun events: The iconic photograph “Poolside Gossip” shot by Slim Aarons at the famed Kaufmann House in January 1970 was the subject of a slide presentation and discussion at the Annenberg Theater with a capacity crowd. The renowned photo of two fashionable ladies, Helen Kaptur and Nelda Linsk, casually sitting poolside with the glorious mountains and the Kaufmann House in the background has captured the imaginations of people around the world. In the process, it has become a fabulous “chamber of commerce” image that has promoted the Palm Springs lifestyle. Local preservationist Gary Johns, who spearheaded the Modernism Week event, moderated an entertaining and fascinating discussion with Linsk, the owner of the Kaufmann House at the time, about the photo shoot with a small group of friends who gathered for poolside cocktails while Aarons photographed the scene. Among the friends were renowned designers Arthur Elrod and Steve Chase, as well as actress Lita Baron, the third lady who appears in Poolside Gossip. A reunion of sorts took place 45 years later. This past January, photographer Klaus Moser restaged the photo with Helen and Nelda at the Kaufmann House. Sadly, Helen, wife of architect Hugh Kaptur, passed the week before the Modernism Week event took place. But the photos of Helen and Nelda as young lovely Palm Springs models in the 1960s and Nelda’s fond recollections of their decades-long close friendship was a poignant tribute to her memory. Bob Alexander, president of the Palm Springs Walk of Stars, with Raymond Neutra on the dedication of his father Richard's star.

Modernism Week continued its tradition of kicking off Modernism Week with a star dedication for a notable architect on the Palm Springs Walk of Stars in front of the new Architecture and Design Center, Edwards Harris Pavilion. Legendary architect Richard Neutra was remembered at his posthumous star dedication by several speakers including Ron Radziner, of Marmol & Radziner, the preservation architects who did the restoration of the Neutra-designed Kaufmann House; Barbara Lamprecht, author of The Complete Works and Furniture of Richard Neutra; and Beth Edwards Harris, who with her former husband, Brent Harris, owned the house and are responsible for its exacting preservation. Raymond Neutra attended the event. Land Rover, a major sponsor of Modernism Week, raised its profile this year with a stylish design pavilion at CAMP, the central meeting outpost on Palm Canyon Drive in Palm Springs, and several media events. Among the events was an intimate twilight cocktail reception at the Siva House, a midcentury modern hillside home located next door to Albert Frey’s Frey ll. Modernism Week was the perfect opportunity to launch the new Land Rover Discovery. Michael Stern, principal of The Modern Tour of Palm Springs, conducted a Q&A with Gerry McGovern, Land Rover’s chief creative director, poolside with a stunning view of Palm Springs below. “Land Rover is on a journey of transformation; we feel design is the link to the emotion in cars and homes,” commented McGovern. “Good design has the ability to lift spirits." The first Double Decker Architecture Bus Tour in Palm Desert took place on two separate days during Modernism Week. The architectural treasure hunt was curated by Jim West, a long-time Palm Desert resident, and each of the four tours was led by Linda Holden Clode. The tour featured several Palm Desert neighborhoods and a few excellent architectural gems that have been fairly unknown. West and his wife, Karen Prinzmetal, are responsible for discovering a “lost Krisel” among other important buildings in Palm Desert. “Palm Desert has a wealth of architectural hidden gems, some in plain sight,” says West. “The low level of general public knowledge of the 1940s, 1950s, 1960s, and 1970s architecture in Palm Desert today is very similar to the way it was in Palm Springs in the mid 1990s when we all first began discovering individual properties which up until that time were virtually unknown.” Renowned photojournalist James Schnepf turned his camera on Palm Springs’ sexy architecture and the colorful characters who inhabit it. Schnepf’s book Palm Springs Modern Living was the subject of a slide lecture on his new book at the Annenberg Theatre followed that evening by an exhibition at Archangel Gallery in the Uptown Design District.  More than 50 people were interviewed and photographed for this visually stunning and entertaining chronicle of Palm Springs’ notable architecture and the fascinating assortment of cultural creatives who live here. See our VIDEO interview.

Alan Hess, author of 19 books, presented a lecture and made a convincing case why Palm Springs’ significant architectural legacy should be formalized in a Palm Springs School of Architecture. “There was a movement here with a shared set of ideas by architects who created a great range of styles and a range of solutions for the desert using modern materials, thus creating a beautiful lifestyle," says Hess, architecture critic for the San Jose Mercury News, who is passionate that Palm Springs has not been given its due. “That is what we are trying to rectify today.”