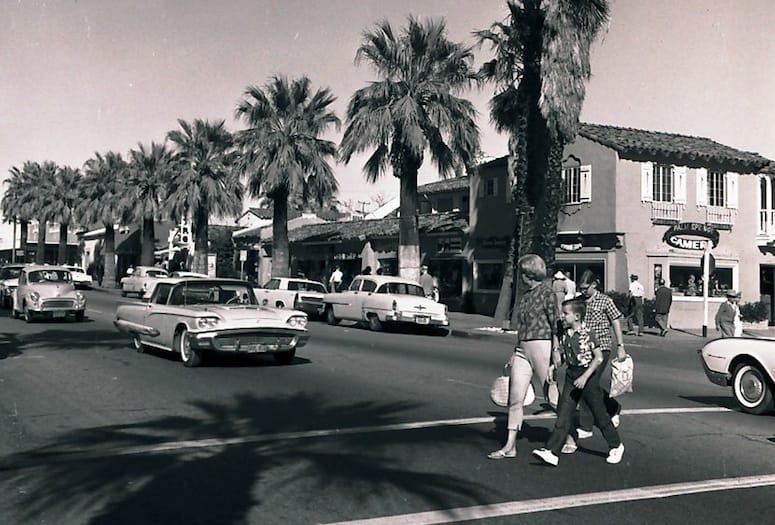 Whether you’re a longtime Palm Springs resident, a new or a returning visitor, the Palm Springs Historical Society (PSHS) Walking Tours can educate, surprise, and entertain you with a lively, specially-curated jaunt through various sections and neighborhoods of Palm Springs.

Choose from a list of eight engaging tours ranging from approximately 1 to 2.5 hours during which historical society docents will pepper their commentary with intriguing and surprising historical facts, like did you know there is a large underground parking garage at the historic La Plaza center?

“I didn’t even know it existed,” says Kathy Leonard, PSHS board vice president. Tour 3 takes you to the historic-rich Ingleside Inn.

Leonard, who initiated and curated the tours five years ago, started the PSHS Tour Program. “Six years ago, I was in San Miguel de Allende (Mexico) on a walking tour and a light bulb went on – I thought ‘why can’t we do this in Palm Springs?’” she recalls.

Leonard was not on the board at the time, so she approached Jeri Vogelsang, PSHS executive director, with the idea, and she eventually received the green light from the historical society's board. photo by david a. lee

See the exterior of the former William Holden estate during Tour 6.

“I worked on the first script for seven months,” recalls Leonard, a retired teacher for Palm Springs Unified School District. “The first year we had only one tour, but it was very successful. The community has really welcomed us. Because we are a nonprofit, people have been very helpful to us."

The tour program has grown to eight historic walks and 25 docents. Roger Freeman is the tour coordinator, and he, Leonard, and all of the docents are volunteers. “We all do it for the love of Palm Springs," Leonard says.

Tour 1: The Heart of the City – this is the first tour and one of the most popular; it focuses primarily on the history of La Plaza built in 1936, the first mixed-use center in California featuring retail and residential. Offered on Wednesdays at 9:30 a.m., Thursdays at 4 p.m., and Fridays at 9:30 a.m.

Tour 2: Golden Era – Hollywood Homes in Old Las Palmas – this takes you through a section of Las Palmas where numerous movie stars and celebrities had Palm Springs homes. Offered on Wednesdays at 9:30 a.m.

Tour 3: Inns, Architecture, and Glamour – discover the historic charming boutique inns such as the Ingleside Inn and others where scores of luminaries have been staying and playing for decades. Offered on Thursdays at 9:30 a.m.

Tour 4: The Exclusive Tennis Club Enclave – catch a glimpse of this little-known Palm Springs neighborhood where movers and shakers now and then hid out. Offered on Thursdays at 9:30 a.m.

Tour 6: Stars and Star-chitects in Deepwell – Some of these elegant midcentury homes were designed by the desert's most renowned architects; view homes of some of Hollywood's biggest names (Loretta Young, William Holden, Liberace, Jerry Lewis, and others). Offered on Mondays at 9:30 a.m. and Saturdays at 1 p.m.

The Palm Springs Historical Society Walking Tours, November through April, 760 323-8297; www.palmspringshistoricalsociety.net. Beginning next season, online reservations will be available. Some tours depart from the McCallum Adobe at the Village Green in downtown Palm Springs, but note that a few of the tours have other departure locations.