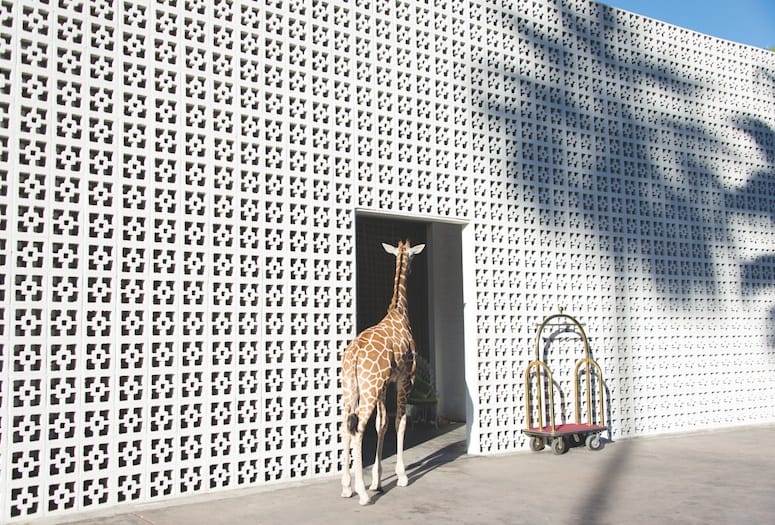 Whether Gray Malin drinks Champagne, margaritas, or cocktails, he insists on a glass with a sprinkled rim. Every artist has a vision, and Malin’s photography reflects his sunny-go-lucky joie de vivre by taking idyllic settings for dream vacations and kicking them up a dozen notches.

Upon this summer’s release of his new 14-image series, the Parker Palm Springs became the latest locale to be Malinized. The Parker’s lush lawns, intimate pools, and signature hot spots lent themselves to a playful, photographic game of hide-and-seek with some interesting creatures.

“Living in L.A., I’ve become enamored with Palm Springs,” says the 29-year-old photographer, whose previous exhibitions such as Prada Marfa — in which fictional shoppers congregated outside a Prada-inspired art installation in rural West Texas — gave him an instant following. "This monkey was so well-trained it was incredible," says Gray Malin of this photo, 5 O’Clock.

His fame increased with beaches photographed from above, from Brazil and Portugal to Sydney, Miami, and the Hamptons. The aerial images of sunbathers scattered like rainbow sprinkles on sand possess a captivating and retail appeal. Moving beyond wall décor, they grace Malin-brand iPhone cases, beach towels, men’s swim trunks, and Sperry boat shoes.

“I’ve been to a lot of places all over the world, and the Parker is more than just a weekend escape to me; it’s inspiring.”In Malin’s world, penguins waddling poolside and zebras sunning on the petanque field are the makings of the ultimate Palm Springs getaway. So with the Parker’s backdrops as his muse, he set out to visually entice his fans to step inside one of his own personal hideouts. Malin’s fantasy became reality for two fanciful days. Had you been a midweek guest back in February, you too may have spotted a giraffe taking up the valet’s post, been tickled by flamingos sidling up to the lemonade stand, or monkeyed around with the notion of ordering a martini from the cheeky Capuchin perched atop the lobby bar. A trail of enchanted onlookers relinquished their plans for the day to follow Malin’s mini circus wherever it went.

In Gray Malin at the Parker, the hotel comes across as beachy as St. Tropez, as seductive as the Greek Islands, and as intriguing as Antarctica — a few of Malin’s favorite subjects. This series, he says, works as well in a child’s bedroom as it does in other spaces, whether a beach escape, mountain retreat, city flat, or desert weekender. Though Malin often employs animals to express his rosy perspective, this marks the first time he opted to contain a full series on-site at a resort, rather than a broader destination.

“I’d like to hang around monkeys more often,” Malin says, offhandedly. “This monkey was so well-trained it was incredible. We started the shoot with him and were spoiled. I thought it was going to be a piece of cake!”

The exotic animals seem uncannily at home in the sun-dappled settings, balloons and all. But cake it was not. With just two days to capture the series he envisioned,

Malin had to map out each photo concept and its venue strategically while maintaining a spontaneous excitement to each image. “Flamingos are very long, between long necks and long legs, and that makes them hard to work with,” Malin says. “Getting two of them to pose at the exact same moment was really hard. In the end, having one was just as great as having two. ‘Skinny Dip’ was literally our last shot of the day. I looked at my camera and said, ‘We’re done.’ It was the shot I had wanted so badly.”

A stubborn Zack the zebra simply wanted to munch grass. Word has it one flamingo took flight. A behind-the-scenes video on GrayMalin.com reveals the monkey playing piano before climbing on Malin’s head and a giraffe breaking away into a spritely gallop. Even with skilled handlers on location, “you have to have a lot of patience,” Malin says. “They give you what you’re looking for, but with time. Fortunately, I like the unexpected.” It’s highly unlikely that the exaggerated height of the Parker’s tangerine double entry doors were intended to accommodate a curious young giraffe. Yet Malin and his Technicolor imagination have got us second-guessing.