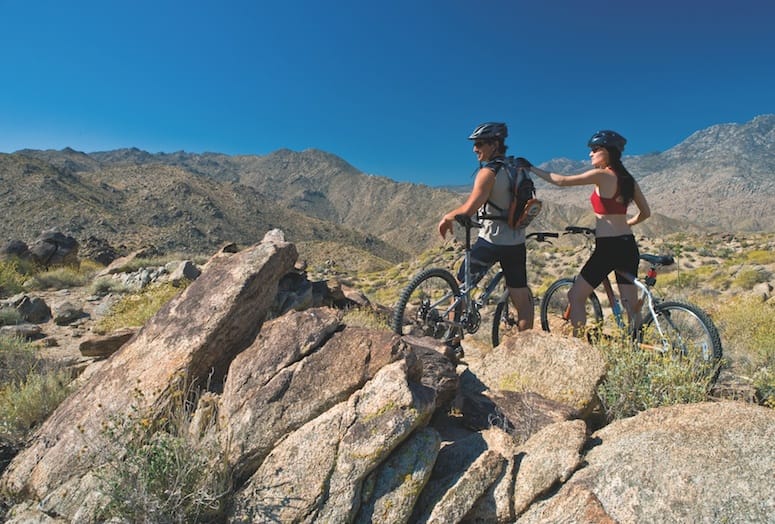 “Exploring the desert by bicycle is one of the most awe-inspiring ways to really get to know this valley,” says Scott McKelvey of Palm Springs Cyclery. “You’re by yourself and you get to see the desert at its rawest. Sometimes, it’s hard to get a feel for where we live, but when you’re out there, the scenes just unfold in front of you.”

Canyons are a highlight, whether you’re biking at the north or south end of the Coachella Valley.

“Just north of the Salton Sea, Box Canyon Road is a beautiful road with no traffic,” he says. “If it’s not a windy day, North Highway 111 to Tipton Road gets you to Whitewater Canyon, and it’s just beautiful.”

For beginners, McKelvey recommends the city bike loops in Palm Springs or a ride from Old Town La Quinta up to Bear Creek, which features a paved bike path. He also recommends the bike lane on Eisenhower Drive.

“There’s a lot of neat stuff to explore,” McKelvey says. “Desert cities have come a long way in creating recreational bike routes for beginners and families,” says Dave O’Donnell, owner of Tri-A-Bike. “Palm Desert has some good routes, and the city of Palm Springs has a very good network of existing bike routes.”

For those looking for more wide-open spaces, O’Donnell recommends looking toward the eastern end of the valley, where riders can comfortably go at their own pace.

“The friendliest city is probably the La Quinta area,” he says. “The roads are wide; the traffic is slower. The roads are striped with bike lanes and some even have sidewalks that can be used instead of the road.”

“Most people will find they can ride out there, since it’s generally flat. For a lot of people, that’s some of the best, safest riding in the Coachella Valley.”