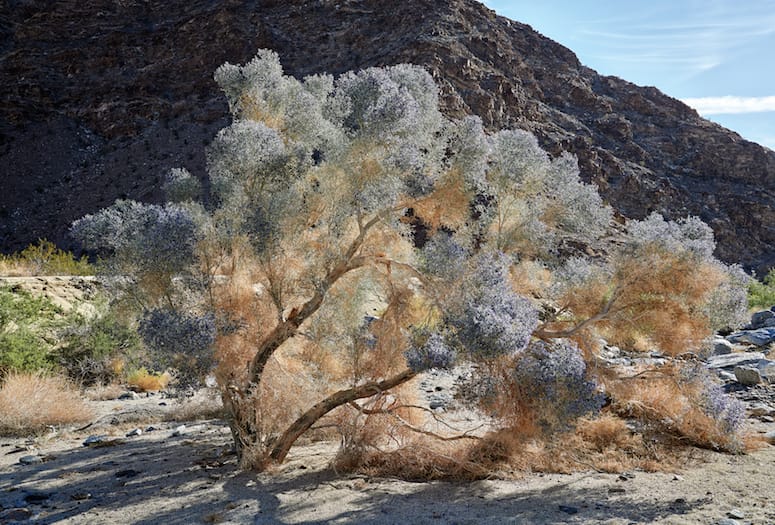 Constantinople-born wanderer and polymath Constantine Samuel Rafinesque (1783–1840) sailed around the world studying vegetation and ultimately settled in the United States, becoming a professor of botany in Kentucky. Rafinesque is responsible for naming one of the Coachella Valley’s most beloved plants: the smoke tree, a reference to the indigo flowers that emerge with every onset of summer.

Native to the Southern California and Arizona deserts, the tenacious Psorothamnus spinosus (a perennial member of the pea plant family) thrives in arid climes, although prolonged instances of drought increasingly threaten the species’ survival.

Its billowing, spindly branches camouflage amid the sandscape sans color most of the year; the grayish hue “helps reduce stem temperatures when it gets too hot,” explains Kirk Anderson, curator of gardens at The Living Desert Zoo and Gardens in Palm Desert. “They’ve got a deep cap root and can access soil that stays wet longer. It gives them reserves that carry through later into the season, which lets them flower later …

They grow in a pretty dynamic environment, in desert washes. So they’re subjected to flooding and can handle that. They can get knocked over and kind of stand back up and reroot. It can be a tough place.”

The plant’s glorious, deep-purple petals emerge only from late May through June. View them now around the valley or visit The Living Desert to walk among the park’s collection of giant smoke trees.